Facebook Twitter Copy URL
Copied
The 0.6% August 2015 inflation brings the year-to-date headline inflation to 1.7%, below the target range of 2%-4% set by the government for the year

MANILA, Philippines – Lower energy, food, and oil prices restrained inflation anew to an all-time low of 0.6% August 2015, according to the National Economic and Development Authority (NEDA).

The Philippine Statistics Authority (PSA) reported Friday, September 4, that the country’s headline inflation rate recorded its lowest level anew, tapering down to 0.6% in August 2015 from 0.8% in the previous month and 4.9% in August 2014.

“The current low inflation environment exhibited in the first 8 months of 2015 has supported domestic demand, particularly household consumption, and we expect this to persist throughout the rest of the year,” said Economic Planning Secretary Arsenio M. Balisacan.

For the first 8 months of the year, core inflation averaged at 2.2%.

Inflation in the National Capital Region was also slower in August 2015 relative to the previous month (0.2% from 0.8%), while inflation in the other regions of the country (0.8%) remained unchanged. 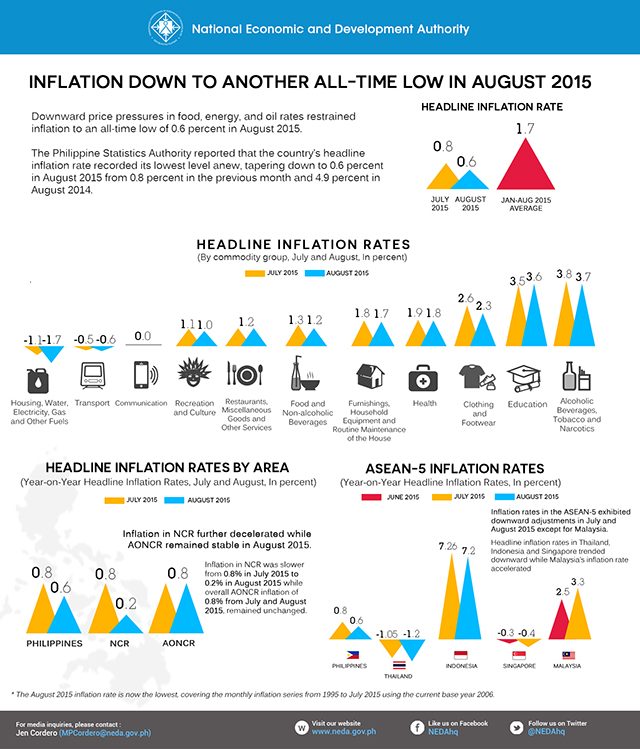 Headline inflation in the food sub-group continued to ease in August 2015 (1.2% from 1.3%) due to slower price adjustments in almost all its sub-items such as breads and cereals, fish, and fruits.

The stable bread prices benefited from the steady decrease in the price of hard flour.

Also, lower electricity rates and oil prices significantly affected price movement of non-food commodities, which was slower at 0.2% in August 2015 from 0.4% in July 2015.

“Food inflation and international oil prices are expected to remain low and will constrain any upward price movements in the near-term,” said Balisacan, who is also NEDA director-general.

However, Balisacan noted there is still an upside risk to inflation from the expected onslaught of the El Niño in the country in the coming months until early 2016.

NEDA is spearheading the government task force on El Niño, and has started drafting the Roadmap to Address the Impact of El Niño (RAIN).

“We need to reinforce our El Niño preparations to ensure food security. The strong collaboration of the national government, local government units, and the private sector is essential to the success of efforts to mitigate the effects of El Niño,” he said.

Latest forecast of the central bank showed inflation falling below target at 1.9% this year and falling also starting next year.

“August inflation figure was well within our forecast range and helps to keep us on track to the path of within target inflation for 2016 and 2017,” Bangko Sentral ng Pilipinas Governor Amando Tetangco Jr. said.

He added monetary authorities would continue to monitor the price of all in the world market, as well as the impact of the prolonged El Niño that is expected to last until the first quarter of 2016.

“We’re also mindful of global developments and their effects on domestic liquidity,” he said.

“We’ll make adjustment to policy if needed to ensure just enough liquidity in the market so favorable inflation path is sustained,” the BSP chief said.

He added that BSP is likely to keep its current monetary stance unchanged this year.

“[The] need for monetary policy stimulus to spur economic growth is low for now, with promising drivers of growth in the second quarter sustaining the pace of growth or gaining momentum in the second half,” Cuyegkeng said. (READ: Second half will be better – economists) – Rappler.com