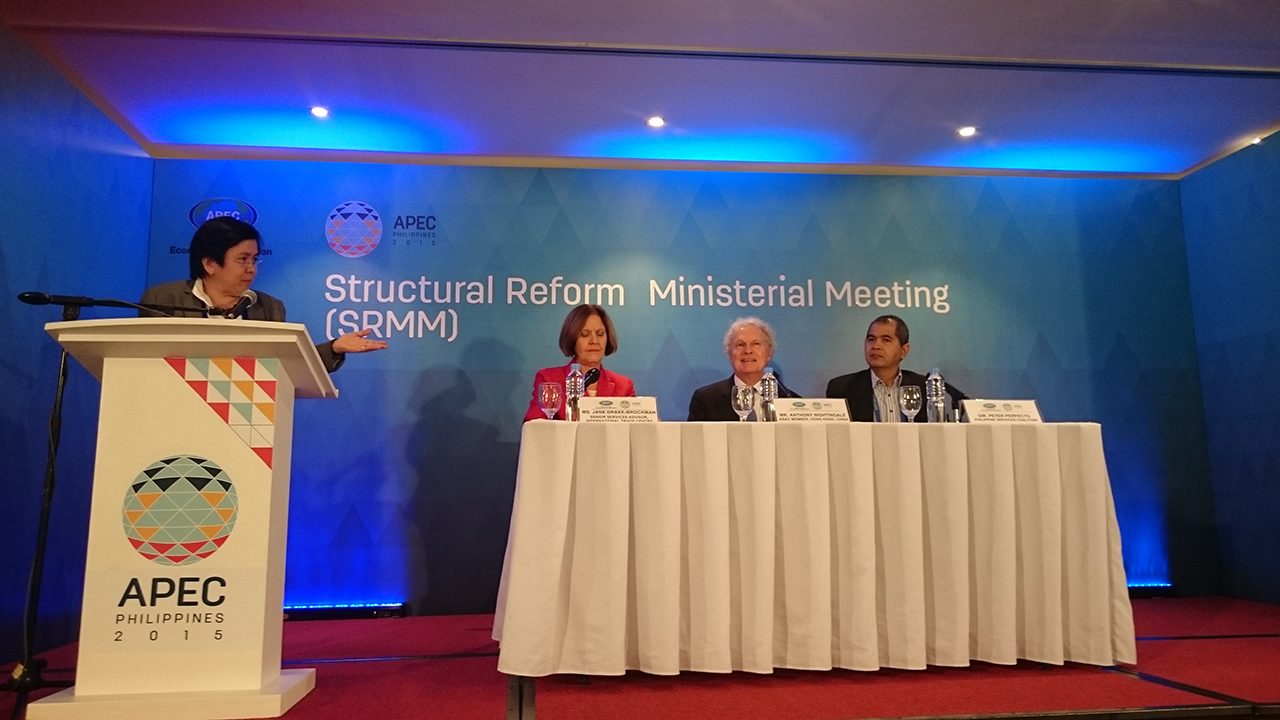 CEBU CITY, Philippines – A United Nations (UN) official said on Tuesday, September 8, that the world is in the midst of a services revolution and the prospects for job growth are greater in this than in other sectors.

“We have to focus on the future [as] we are in the midst now of a services revolution, just like the industrial revolution, in which the Internet is changing everything we do so we need to grasp this opportunity,” said Jane Drake-Brockman, senior services adviser to the UN agency, International Trade Center (ITC).

“The global evidence is there: this is the sector, which in the future, will employ the most people,” she added.

A big step toward this is the creation of the Asia-Pacific Services coalition, the product of extensive meetings between private regional service coalitions on the sidelines of the APEC Structural Reform Ministerial Meeting (SRMM) held in Cebu City on September 7 to 8. (READ: Sustaining growth: PH can learn from APEC economies)

The coalition, expected to be the world’s largest for services, will oversee a collection of regional service organizations that will promote the sector by pushing for reforms.

The coalition also aims to help the industry and share best practices and experiences to increase growth in the domestic and regional level.

In the Philippines, the sector’s importance is exemplified by the business process outsourcing (BPO) industry, which will soon become the largest single industry in the country employing 1.3 million by the end of 2016.

The services sector is closely linked to efficiency in all the other sectors that ultimately are for inclusive growth. And to be competitive in agriculture, fisheries, forestry, mining, and manufacturing these days, one has to make sure that the services inputs are efficient, Drake-Brockman explained.

This is why establishing the Asia-Pacific Services Coalition is an important step for furthering services liberalization and facilitation in the region, Nightingale said.

Nightingale cited the success of BPO industry as a good example of good facilitation.

The industry grew directly grew out of the decision to open up the telecommunications industry, he explained, “which not only benefitted the end consumer through increasing competition but also lead one of the economy’s leading lights.”

It is good example of the kind of mindset needed by governments to push policies that will help the service sector in the future, Nightingale said. In line with APEC

“The ABAC has been pushing the cause of the service sector for the last few years. But this year, we’ve been fortunate to get a big boost from APEC under the Philippine leadership,” Nightingale said.

The Philippines has chosen to make services a key part of its focus for its activities for the year within the theme of inclusive growth, he added, and has recognized that aiding the development of the service industry and micro, small, and medium enterprises (MSMEs) is really an important part of delivering inclusive growth.

The heart of this new framework is a services competitiveness roadmap for APEC which will require each member economy to work on services, he added.

The coalition will hold its next meeting in Beijing on May 28, 2015, by which time the founding members expect to add exponentially to the number of organizations under its banner.

Peter Perfecto, executive director of the Makati Business Club,  who will head the Philippine Service Coalition for the Asia-Pacific Service Coalition said that 5 organizations have already expressed interest in joining.

“Cebu has reason to be proud because many years from now, when service industries across the region are reaping the benefits of this initiative and creating inclusive growth, people will remember that the Asia-Pacific Service Coalition was born in Cebu in 2015,” he said. – Rappler.com