#AskTheTaxWhiz: Why push for tax reform? I am a diehard #AlDub fan and I don’t see anything wrong about it. But after reading your posts appealing to AlDub fans to support the call for lowering income taxes, I asked myself what’s in it for a jobless person like me if the government cuts taxes.

But thank you for joining our celebration of the National Pabebe Wave Day. With all the problems and hopelessness around us, trending in Twitter worldwide shows that the Filipino people will always choose to be happy. In fact, I captured your posts here using #ALDubEBforLOVE with a very clear message, “IBABA ANG BUWIS” (“LOWER THE TAXES”). It seems you are really desperate to get the support of the more than 25 Million AlDub fans who tweeted on September 26, but honestly even if you get our support I don’t think the government will listen to us.

Like the elite and intellectuals, the government criticize us for wasting our time on “nonsense” stuff. I also heard the comment of the Bureau of Internal Revenue (BIR) chief saying that the poor do not pay taxes. Is that true? So, we’re only useful for them during elections?

The government claims that the 2016 budget will achieve inclusive development by growing our economy to 7% to 8% and reducing poverty to 18% to 20% of the population. Does this include us?

Now that the election is around the corner, many politicians are supporting your tax advocacy especially the presidentiables, except probably Mar Roxas who have sworn to continue the “Daang Matuwid” which means more taxes to achieve inclusive growth.

What does it really mean to have more taxes? How will we benefit if taxes are low? Why does President Aquino, who pledged to listen to his “bosses,” seemingly indifferent to your call for lowering taxes? What is in it for us if we support your proposal to lower taxes? Will it give me a job?

Sorry for being self-centered. I have read about your group (CSR Philippines) and your advocacy to promote small and medium enterprise development and genuine tax reform toward inclusive growth. But I do not see how this will help me get a job or pay my rent.

I hope you can explain it so I can support you and convince the #AlDubNations to rally behind your advocacy to push for a genuine tax reform.

Hoping to enjoy a tax-free lifestyle,

Thank you for recognizing our efforts in reaching out and celebrating with the AlDub fans.

I am a “Kapuso” as much as a “Kapamilya.” My mom is a certified “Kapuso” while my nephews are more “Kapamilya.” But as you know, one of our ambassadors and my good friend is the Kapuso Primetime King Dingdong Dantes. His immense support and invaluable contributions to our foundation, CSR Philippines both as our ambassador and founding trustee, made me realized that celebrities and the traditional plus social media have a very crucial role in building a great nation through the information and values shared with their fans and followers.

As the cliché goes, “desperate time calls for desperate measure.” I may be desperate to get the support of AlDub fans but I sincerely acknowledged the positive impact of the kalyeserye. The government, especially the BIR, should learn from the AlDub phenomenon that it is not fear but love and care for others that brings us together which we call bayanihan in support of a cause we truly believe in.

Regarding the statement of BIR Commissioner Kim Henares, she may have forgotten that even the poor pay the 12% value added tax (VAT) on the consumer products they buy from convenient stores.

As to being “useful” during elections, I am sorry but we are only their “bosses” when they need our votes.  That is why we need to be wiser this time in choosing the candidates who will prioritize our interest or support our advocacy like lowering income taxes.

I am not an economist but I understand the importance of investment grade, economic growth, gross domestic product, and poverty alleviation. What I do not understand is where our taxes go considering that we have been overtaxing the 13 million employees who have been painstakingly contributing a lion’s share in the total government budget.  In fact, the withholding taxes on compensation of employees reached P232 billion ($4.98 billion) versus the income taxes contributed by corporations at P455 billion ($9.77 billion) in 2014. (READ: Why PH has 2nd highest income tax in ASEAN)

The Aquino government said that 4.48 million households have received cash transfers since 2014; 84,478 new classrooms have been built; and 14.7 million poor households have become PhilHealth members.

So, if you do not feel the benefit of this trillion-peso budget, you may have to ask our government: why do we need to pay so much taxes from 12% VAT to 32% income tax among all other unnecessary and overly burdensome taxes? As a matter of fact, we have the highest effective income tax rates among the ASEAN countries at 30% for corporation and 32% for individuals.

Here are some facts which will help you understand why the government is hesitant to lower income taxes: 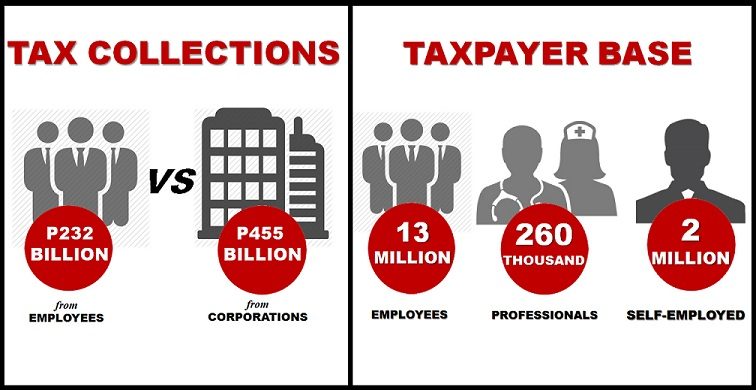 Obviously, BIR is highly dependent on voluntary payments and withholding taxes, especially from the compensation of employees. This should have prompted BIR to be more customer-centric in providing taxpayer assistance to further increase voluntary payments.

Unfortunately, despite the many revenue measures BIR is implementing, they are squeezing too much the very narrow taxpayer based composed mostly of employees while the real tax evaders, smugglers, and corrupt politicians are splurging in a “tax-free” lifestyle, to hit their ambitious target collections.

As the World Bank reiterated, we need to broaden our taxpayer base before we lower out taxes.

If the government lowers our income taxes, it means more disposable income for every household and more working capital for businesses. This means more companies will be able to hire more employees or to give salary increases and bonuses especially now that the tax-exempt 13th month and bonuses have been increased to P82,000 ($1,759.90) annually.

Thus, I appeal to the more than 25 million ALDub fans to understand our advocacy and find in your hearts to support it as this will directly impact every employee, every family. In fact, our proposal is to even increase the tax-exempt income to P500,000 ($10,731.09) which is currently the ceiling before you are taxed at the 32% income tax: Led by the Tax Management Association of the Philippines (TMAP), CSR Philippines together with 15 other business groups, chambers of commerce, coalitions of employees, and professional associations signed the unity statement on income tax reform. We urge our legislators from the Lower House and the Senate to immediately pass the following measures:

The inherent inequity in the tax system is brought by the fact that the top bracket of P500,000 ($10,731.09)  has remained unchanged since 1986 EDSA Revolution. If President Aquino does not do anything about this, he is even worse than the dictator of Martial Law.

Taxes are meant to uplift the lives of our people, but if it becomes too much of a burden than benefit then the government should do something or they defeat their very existence to serve the people.

I hope we can get the support of the #AlDub fans and help us push for #TaxReformNow!

Mon Abrea is a former BIR examiner and an advocate of genuine tax reform. He serves as chief strategy officer of the country’s first social consulting enterprise, the Abrea Consulting Group, which offers strategic finance and tax advisory services to businesses and professionals. Mon’s tax handbook,Got a Question About Taxes? Ask the Tax Whiz! is now available in bookstores nationwide. Follow Mon on Twitter: @askthetaxwhiz or visit his group’s Facebook page. You may also email him at consult@acg.ph.