APEC 2015: Where PH stands in the Trans-Pacific Partnership Facebook Twitter Copy URL
Copied
(UPDATED) Interest in the TPP has surged on the eve of the APEC summit, but it will take awhile to come into force, say experts

MANILA, Philippines (UPDATED) – As world leaders across the Pacific Rim prepare to fly to Manila for the Asia Pacific Economic Cooperation (APEC) leaders meeting, it is only natural that the world has been talking about the prospects of the Trans-Pacific Partnership (TPP).

It would, in effect, create the world’s largest free trade area comprising 40% of the global economy.

Despite the agreement being signed, the TPP is not likely to come into force anytime soon.

Before the TPP takes effect, each member country will have to have the agreement ratified by their respective congress or an equivalent.

Here is a look at the challenges each country faces in getting the deal ratified. (READ: Key Facts: The Trans-Pacific Partnership)

New Zealand, in fact, has just released the full text of the agreement in order to initiate its ratification process and, in doing so, has given the world its first clear look at the TPP’s terms. 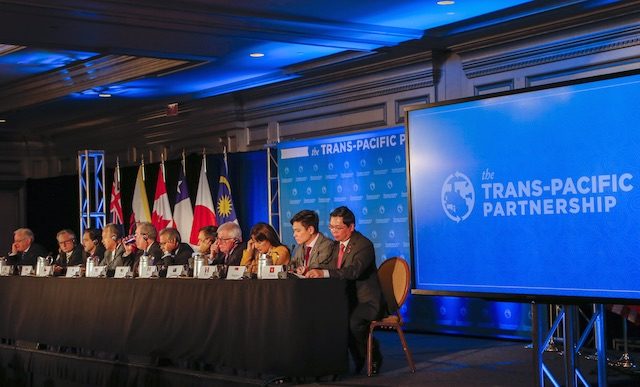 Discussions on the sidelines

APEC, essentially a forum to promote trade between its member economies, provides an ideal environment to push the TPP agenda further.

The leaders of the 12 TPP members, who also all happen to be members of APEC, have already signaled their intent to meet during the week to further the deal.

“They’re all going to be here, anyway, so they may as well meet even if it’s impolite to the host as the Philippines is not a part of it,” said Dr. Cielito Habito, ‎the former Director-General of the National Economic Development Authority (NEDA) during the Ramos administration.

For the Philippines, the APEC meeting could serve as the venue to make its intent to join the TPP clear, said Ernest Z. Bower of the CSIS, a leading Washington DC based think-tank. (READ: Seizing the moment: Preparing for Obama’s trip to Manila)

Joining the TPP would help drive economic development by having the world’s supply chains route through the Philippines, bringing the jobs, technology, and infrastructure that the country needs to continue its impressive economic growth into the next decade, Bower said.

Habito mentioned that the Department of Trade and Industry (DTI) is currently addressing policy gaps to joining, and analyzing what the country stands to gain with the TPP.

“For example, for trade in goods, the government is looking at what are the kind of things that we produce that the Philippines can potentially sell to other TPP members aside from the main ones that we’re already dealing with heavily, like the US and Japan.”

The TPP would open the door to other markets, like Latin America for example, he added.

“The question though is when will it open up,” he said. Behind the leaders’ grand pronouncements on how TPP will exponentially grow trade lies the fact that the TPP is still a few years away from coming into force.

“Frankly, even just getting the existing 12 members of the TPP going is estimated by people to take years, so in a sense, we have some more breathing space in terms of shaping up to be eligible,” Habito said.

Even in the US, which was the driving force behind the project, the agreement is expected to face stiff opposition from the US Congress, with some observers predicting it would take a few years for it to pass.

Much will also depend on the outcome of the US election, with Democratic frontrunner Hillary Clinton, who played a pivotal role in the formulation of the agreement as Secretary of State, recently reversing her stance on the TPP.

In the most recent Republican debate, outspoken Republican candidate Donald Trump has also called the TPP a “horrible deal, that will come to nothing.”

Given the expected timeframe, Habito isn’t too worried about being outside the agreement for the moment as the biggest concern is the possibility of trade diversion from our biggest markets such as the US.

“The worry is that we might lose some of our exports to the US to countries like Vietnam or Malaysia who are part of the TPP and produce similar products to what we do,” he explained.

The Philippines also has existing bilateral trade agreements that will serve to keep trade with its biggest trading partners steady for the immediate future.

“We still have the Generalized System of Preferences (GSP) which allows duty free entry for most of our exports into the US. For as long as we still have the GSP, which of course isn’t permanent, then there won’t be much trade diversion, “Habito said.

A new version of the GSP was signed this July and will last until the end of 2017.

The country also has an agreement with Japan its largest trading partner, called the Japan-Philippines Economic Partnership Agreement (JPEPA), which would also guard against diversion.

China, the country’s second largest trading partner, is not part of the TPP with some observers saying its due to political reasons.

The US also recently released the full text of the agreement on its Trade representative website where it stated in summary that: “The United States is interested in seeing TPP membership grow over time so that it can serve as a platform for economic integration across the Asia-Pacific region.”

New entrants, however, “would need to be willing and able to meet TPP’s high standards, and the terms of accession for new entrants will have to be agreed by all pre-existing parties.”

The timing of the country joining then will depend on the time it will take for the TPP to come into force so that it can begin accepting new members.

As Habito put it, “Its all a big question mark at this point.” – Rappler.com