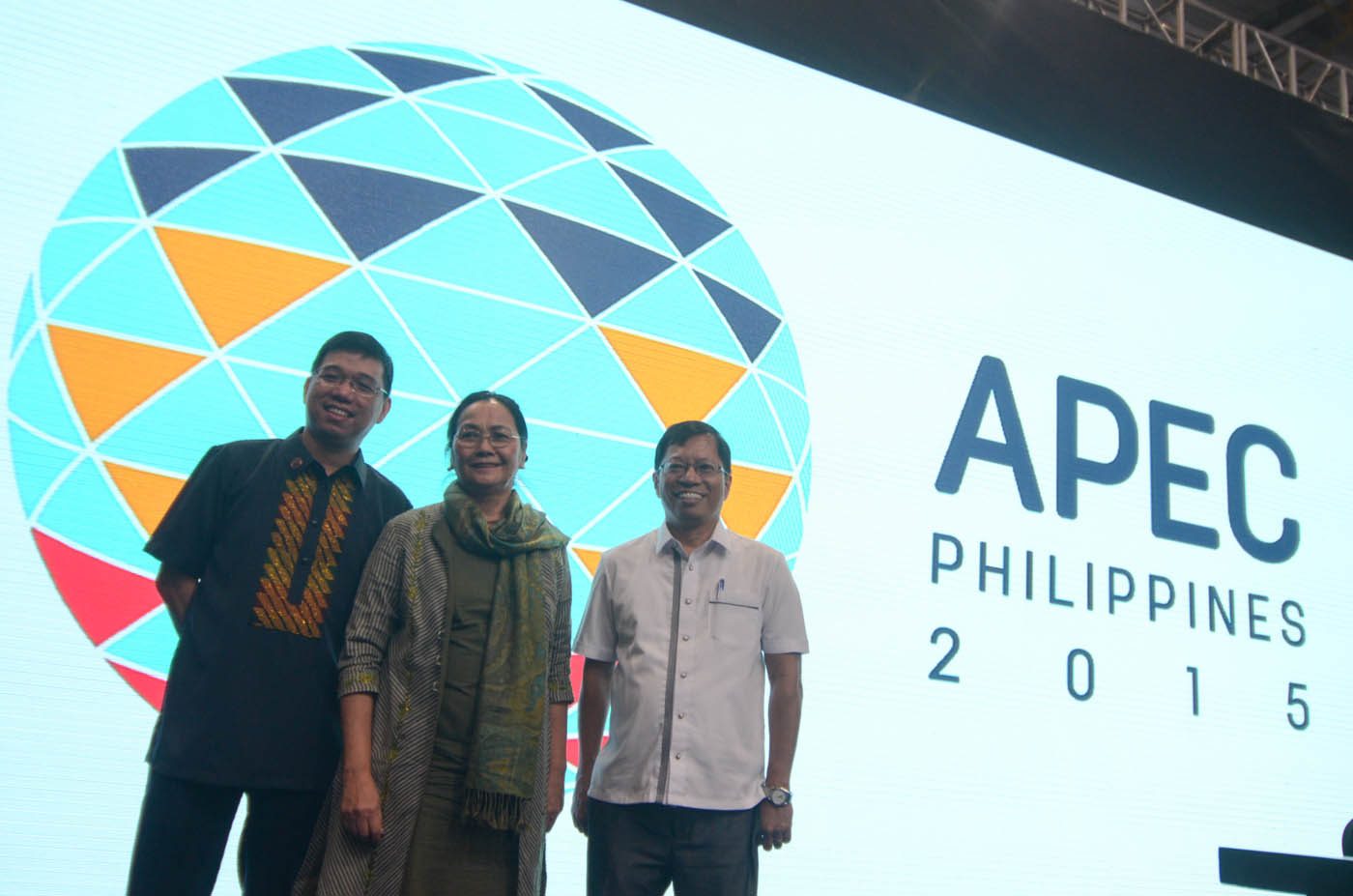 Facebook Twitter Copy URL
Copied
(UPDATED) The portal, which is a 'work in progress,' is aimed to provide timely information for micro, small, and medium enterprises to navigate cross-border trade

The proposal for APECTR was first presented by the Philippines during the First Senior Officials’ Meeting (SOM1) in Clark, Pampanga in February this year and is one of the results to make the region “friendly” to micro, small, and medium enterprises (MSMEs), as aligned with the Philippine government’s push to put them front and center of the regional trade agenda.

In September 2015 during SOM3, APEC adopted the initiative and agreed to launch the APECTR website (http://tr.apec.org/) this month, in time for the APEC Ministerial Meeting and APEC Economic Leaders’ Meeting, a contribution to the overarching theme of inclusive growth by providing information to those who want to participate in cross-border trade.

The role of MSMEs for inclusive growth is one of the pillars of this year’s APEC, which is themed, “Building Inclusive Economies, Building a Better World.”

Clara Reyes-Lapus, president of Mama Sita – a homegrown brand of products that include oyster sauce, marinades, vinegar, tropical fruit syrups, jams, pastes, sauces, porridge kits, and geli-coolers – shared that several years ago, she was trying to offer their products to Peru.

But she was told, “we (Peru) don’t have a free trade agreement (FTA with the Philippines). And I said, ‘what’s that?’ “To register a product that’s fit to be imported, sometimes it’s like a maze,” she added.

“That’s why the website (APECTR) will be helpful in guiding us where we can offer (our products). [It] would give MSMEs guidance on where there are trade agreements.” Lapus said.

Since 1989, APEC has worked on reducing tariffs and other trade barriers across the region, creating an environment for the safe and efficient movement of goods, services, and people across borders in the region through policy alignment, as well as economic and technical cooperation.

“The APECTR also supports the Boracay Action Agenda to globalize MSMEs, as agreed by trade ministers in May 2015,” said Ceferino Rodolfo, assistant secretary for the Department of Trade and Industry’s (DTI) industry development group.

Rodolfo said that in their consultations with MSMEs, which account for about a third of the gross domestic product, represent 96%-98% of all registered businesses, and employ more than 50% of the entire domestic workforce, “easy access to trade-related information has been consistently cited as a critical barrier to their being able to penetrate export markets, or being able to access alternative inputs from overseas.”

Thus, the APECTR seeks to address such concern or MSMEs, Rodolfo added.

“Business decisions not based on exact regulations can be catastrophic for MSMEs,” he said. 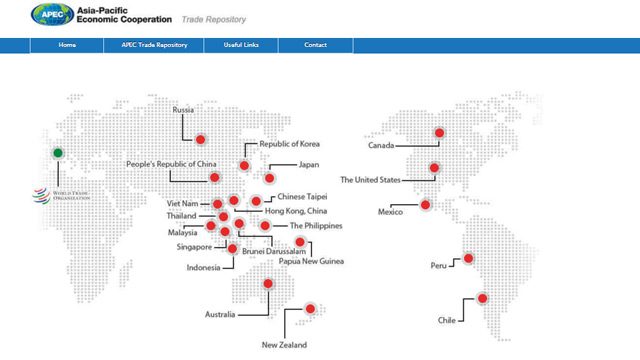 The website will contain information from the APEC tariff database, most-favored nation (MFN) and trade statistics, and the WebTR. APECTR will be jointly maintained by the APEC secretariat and the Philippine government, with the commitment from APEC member economies that they will be constantly updating the information available online.

The sets of information in the APECTR include MFN, orthe rate of tariff duty imposed on World Trade Organization (WTO) members for imports within its territory, unless both parties are part of a preferential trade agreement

Information on preferential tariff rates are also included. Under a preferential trade agreement, parties agree to impose lower tariff duties for products orginating from their territory at a rate lower than MFN. On occasion, developed nations like Japan or the European Union may give unilateral preferential treatment to developing economies/countries.

Rules of origin (ROO) also available in APECTR. ROO are the criteria needed to determine the national source of a product, and their importance is derived from the fact that duties and restrictions in several cases depend upon the source of imports. ROO are used to:

Best practices in trade facilitation, other trade masures, trade and customs laws/regulations, and procedural and documentary requirements are also available.

Authorized Economic Operations (AEOs), including MRAs (mutual recognition agreements) and list of AEOs are also covered.AEO is defined as a party involved in the international movement of goods in whatever function that has been approved by or on behalf of a national customs administration as complying with WCO or equivalent supply chain security standards.

“APECTR makes this information available so stakeholders can learn more about the AEO programs of different APEC economies, including its requirements, procedures, export destinations that have MRAs with APEC economies, as well as when available, a list of AEOs,” APEC noted.

Luis M. Catibayan, director of Bureau of Import Services said the Philippine has its own trade repository (PTR), also a work in progress. It is a parallel effort to ensure that MSMEs would maximize the benefits from the country’s APEC hosting. (READ: What will the Philippines gain from hosting APEC 2015?)

DTI, along with other agencies, launched on October 30 the PTR, a web-based portal that has the accurate and latest information on all trade-related matters, like import-export regulations. “It’s a component of the government’s trade facilitation strategy… which will allow businesses easier access to information, and facilitated complliance with prescribed regulations,” Catibayan said.

Both the APECTR and PTR aimed to help reduce the amount of time and cost related to trade transaction, Catibayan said. “PTR is also part of our commitment under the ASEAN (Association of Southeast Asian Nations) Trade in Goods Agreement (ATIGA),” he added.

Under ATIGA, each ASEAN member-state is required to publish their respective trade repositories, which will then be linked up to an ASEAN trade repository. “This is also in line with our commitment to trade facilitation under WTO,” Catibayan said. PTR will also be linked to APECTR.

“PTR is a work in progress, but we have a substantial number of information contained there,” Catibayan said.

“We have seen that transparency not only makes good sense for governance purposes, but also makes good business sense,” Rodolfo added.

Lapus said they do not know yet how much Mama Sita will save, “but the knowledge made available by APECTR will allow us to reduce our costs.”

But apart from easier access to capital, and for MSMEs to benefit from APECTR and PTR, and for them to participate in securing links to the global supply chain, a robust Internet connection is a must.

Aquino said that with better Internet, “we can make the lives of our micro, small, and medium entrepreneurs easier….The facets of the Internet go beyond just communications.”

In a statement released Sunday, Vice President and presidential candidate Jejomar Binay said MSMEs in the country were “missed opportunities” for jobs and livelihood opportunities in the last 5 years.

“MSMEs need a political and regulatory environment and a government that helps solve their problems instead of being part of the problems,” he said.

Binay noted, “if the government just gives 10% of the attention it spends in pursuing the BBL (Bangsamoro Basic Law) or 10% of the budget of CCT (conditional cash transfer), then our MSMEs can be [on a] par with their counterparts in the APEC or ASEAN,” he said.

But Rodolfo said APECTR is a live project and and it will be continuously improved.

“We’re in touch with MSMEs to ensure that these repositories will be helpful for them.” – Rappler.com