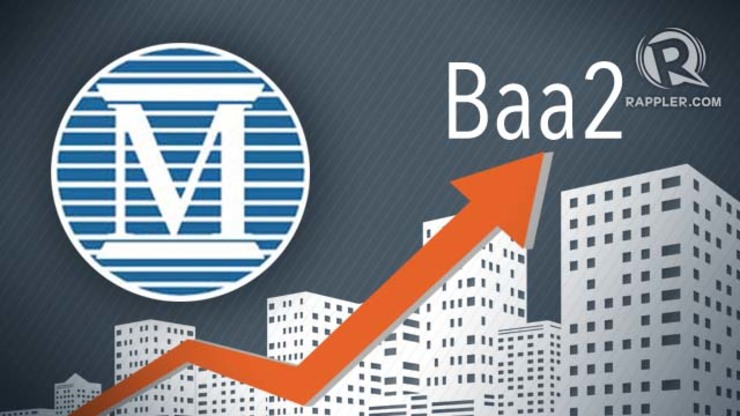 MANILA, Philippines – Moody’s Investors Service retained its credit rating and outlook for the Philippines in its latest report.

The debt watcher also kept its credit rating and outlook for member countries of the Association of Southeast Asian Nations (ASEAN) amid the significant depreciation of currencies in the region this year.

An investment grade means the Philippines, as a borrowing country, has a strong ability to pay its debt. This lowers its borrowing costs, generating savings, which may be spent for social services.

For Filipinos, it means better education and health care, and affordable loans for major purchases. (READ: INFOGRAPHIC: What a credit rating upgrade means for Filipinos)

For the Philippines, the debt watcher retained its Baa2 rating on a stable outlook.

Moody’s upgraded the country’s credit rating to Baa2 – a notch above the minimum investment grade – with a stable outlook in December last year. (READ: PH gets another boost from Moody’s)

It likewise maintained the outlook for other ASEAN members including Indonesia (Baa3, stable); Malaysia (A3, positive); Singapore (Aaa, stable); and Thailand (Baa1, stable).

According to the rating agency, ASEAN members have strengthened since the late 1990s due to robust global growth and low interest rates that facilitated credit improvements.

But the external environment is now less supportive, so sovereign credit trends will hinge on whether governments can animate domestic sources of growth without increasing financial risks, Moody’s added.

It pointed out exports were weak this year across the region due to weak global demand, while commodity exporters in Indonesia and Malaysia experienced the strongest currency pressures.

Moody’s said the Philippines and Malaysia have the largest share of portfolio investments in their investment liabilities.

It explained the Philippines avoided similar outflows due to relatively stable economic and policy conditions.

“Capital outflows from the Philippines have been quite mild given its strong economic fundamentals and relatively stable policy outlook,” Moody’s said.

The rating agency also noted relatively low external vulnerabilities in the Philippines, Singapore, and Thailand that have supported an appreciation in the currencies compared to their trading partners.

Moody’s said the real effective exchange rate (REER) appreciation in the Philippines and Singapore since 2010 has reduced export competitiveness, particularly in the manufacturing industry where competition among regional peers is strong.

Moody’s also said these ASEAN sovereigns are still likely to see capital account pressures whenever unfavorable data are released or even when anticipated global events.

Banks’ outlook stable
In a related development, Moody’s said that the outlook for banks in the Asia-Pacific is generally stable for 2016, but for many of the region’s banking systems, asset quality and profitability will deteriorate.
Slower gross domestic product in the region is also expected due to potential further pressure on currencies and high levels of corporate and household debt in some countries, said Moody’s Managing Director Stephen Lon.

The operating environment is becoming more challenging in most Asia-Pacific banking systems, as lenders feel the impact of subdued global growth, which is in turn exacerbated by weaker demand in China, Moody’s noted. – Rappler.com