MANILA, Philippines (UPDATED) – The Philippines’ gross domestic product (GDP) grew by 6.3% in the last quarter of 2015, up from 6.0% in the 3rd quarter, the government announced Thursday, January 28.

This brought GDP growth for the entire 2015 to to 5.8%, the Philippine Statistics Authority (PSA) said in a press briefing. This means growth this year is lower than the 2014 growth of 6.1%.

The 2015 full-year figure, however, is slightly higher than what’s been predicted internationally.

Early this week, multilateral lender International Monetary Fund (IMF) slashed the GDP growth of the Philippines to 5.7% instead of 6% for 2015 amid the slowdown in China and the normalization of interest rates in the US.

The Q4 growth was also higher than what some analysts had foreseen. Moody’s Analytics earlier said in its latest Asia-Pacific economic preview that the GDP growth for 4th quarter would be 5.9%.

Services up, industry and agriculture down

Growth in the 4th quarter was driven largely by the services sector, which accelerated to 7.4% from 5.6% in the previous year. Industry slowed to 6.8% from 9.1% and agriculture in particular contracted by 0.3%, the PSA said.

Services also served as the main avenue for growth for the whole of 2015, growing at 6.7% compared to the 5.9% last year.

“You can see from the results that slower growth is due largely from agriculture. It actually contracted in the 4th quarter and compared to the others it gave the slowest growth for the year,” said National Statistician Lisa Grace Bersales.

Outgoing Socioeconomic Planning Secretary Arsenio Balisacan pointed out that developing the agricultural sector is a priority.

“The agricultural sector persists to be the biggest road block in our goal where attaining a higher and more inclusive growth both in the light of improving crop production and farmers’ income. There is an urgent need to rethink the development strategy for this sector, especially with the impact of El Niño and natural disasters that hound the country yearly,” he said.

He also pointed out that while the agriculture sector is small in terms of GDP at about 10%, it represents about 30% of total employment so there is a need to revitalize it. It would help in poverty reduction as well. 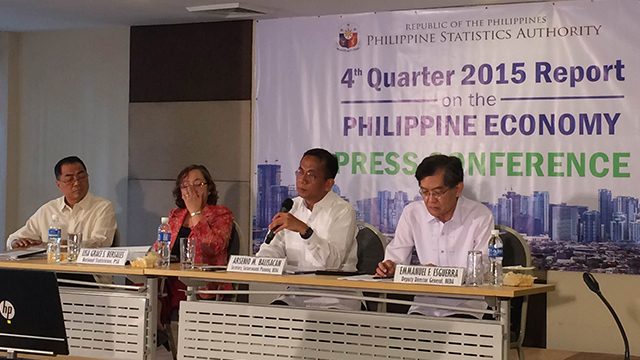 Slower exports was also cited as one of the factors behind slower growth, with Balisacan conceding that “it was a sharp deterioration with imports far exceeding exports. If exports stayed at 2014 levels, this year’s growth would have been stronger.”

He does, however, see some cause for optimism in the figures.

“What is encouraging is that if you look at it, much of the imports were in capital and intermediate inputs and durable equipment, imports that will fuel subsequent economic activity,” he said.

This, he explained, is an indication of confidence in the economy and bodes well for the economy in the medium term.

“I would be more concerned if import growth was high but much of it was consumption-based. That would’ve been a sign of weakness in the economy,” he emphasized.

Asked about the outlook for the new year, Balisacan said that the government is still in the process of estimating exact figures for 2016 growth, but that the aim is in the upper range of 6-7%.

“We have the benefits of research and knowledge about the constraints holding back the economy in reaching higher growth and we can address those. I’ll go for 7% growth. We have the fiscal space, we can aim for higher growth without compromising economic fundamentals,” he said.

In the past, he explained, every time you wanted to reach for 7% growth, you know it wouldn’t be sustainable as it would put a strain on the country’s finances which isn’t the case anymore as the economic fundamentals are more sound.

To emphasize this point, the Bangko Sentral ng Pilipinas (BSP) also announced Thursday that it would maintain interest rates, citing low inflation and the US Federal Reserve’s caution for now.

“The Fed’s wait and see tone reflects the changing global dynamics. For us, we continue to see no need to adjust policy settings at the moment, given the healthy fourth quarter GDP figure of 6.3% and an inflation outlook of a slow creep to within target over the policy horizon,” said BSP Governor Amando Tetangco Jr.

The IMF and the World Bank are both pessimistic about global growth this year with both warning of potential shocks due to China’s slowdown, a strong dollar, and low oil prices.

Balisacan said that the economy is reasonably prepared to face these risks because, while there might be dollar outflows stemming from the US Fed rate hike, the country’s source of foreign exchange is much more diversified than before.

On the China front, the slowdown has been long expected and its growth turned out to be more resilient than expected. Having said that, because of China’s size no one is spared from the slowdown, he said.

Balisacan also agreed with the sentiments of economists saying that in general, low oil prices are beneficial to the Philippines, but it may deepen problems in exporting countries creating shocks so it needs to be monitored closely.

“The 6.3% growth in the last quarter of 2015 affirms that the economy is indeed steadily traversing the higher growth path, building on the solid efforts by both public and private sectors. For 2015, among the major developing countries, the Philippines will likely be among the fastest in Asia, next to India, China, and Vietnam,” Balisacan said.

The challenge is to sustain momentum for reforms, he added. – with reports from Chris Schnabel / Rappler.com