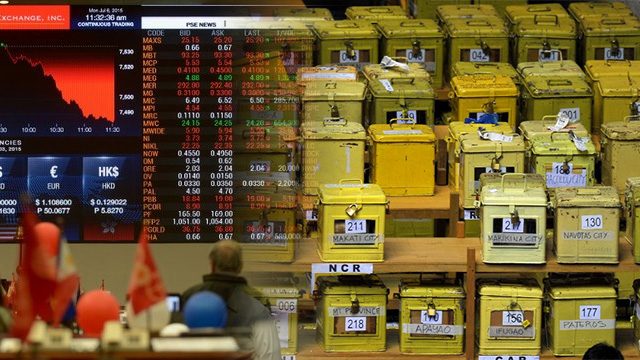 “The benefits of the automated elections as well as quick results boosted the stock market and the local currency these past two days. It showed a clear mandate to the winner, Davao Mayor Duterte,” Jonathan Ravelas, market strategist at BDO Unibank, said in a text message.

As of 9:57 pm on Wednesday, with 95.65% of precincts reporting, Duterte had 15,879,761 votes in the partial and unofficial results from the Commission on Elections (Comelec). He has a lead of around 6.2 million votes over second-placer Manuel Roxas II.

“Clean election also contributed, and Duterte having a sizeable lead in the polls,” he said.

Clarity in his economic direction

Tiu added that Wednesday’s PSEi data showed the highest close since August 14, 2015 and the biggest gain since January 27, 2016.

For Ravelas, Duterte’s clarifications of his economic plans helped thaw the market’s uncertainties.

Before the polls, analysts reported that the Davao City mayor’s vague economic plans and threats to kill thousands of criminals were spooking the financial market.

“Clarity in his appointments to key posts, priorities of his administration, and the timeline to achieve them would be key to win both local and foreign investors,” BDO’s Ravelas said.

“His proof of concept of his governance in Davao gave a glimpse of his policies and business and local folk support him,” Ravelas added. (READ: Philippine economy ready for any president)

He also said the recent names that have been floated for Duterte’s Cabinet are “credible and [have] a good grasp of reforms,” as some were part of the team of former president Fidel Ramos.

On Monday night, Duterte named some people who are likely be part of his Cabinet.

He said former Armed Forces of the Philippines chief Hermogenes Esperon Jr would definitely have a place in his Cabinet. Esperon was Presidential Management Staff head during the Arroyo administration.

The presumptive president also wants his longtime friend, businessman Carlos “Sonny” Dominguez III, to head the Department of Transportation and Communications or Department of Finance.

Dominguez served as agriculture secretary during the presidencies of Corazon Aquino and Ramos.

Duterte also said his high school classmate, Jesus Dureza, could be his chief peace adviser. Dureza held the same position, and also served as press secretary, during the Arroyo administration.

“The PSEi should not break down 6,980 below for now. We will watch the development of the technical behavior base on the fundamental that’s going on, which is the setup of Duterte’s economic reforms, Cabinet secretaries, and foreign directions,” Harry Liu, chief of brokerage firm Summit Securities, Incorporated, told Rappler.

Last February, the Davao City mayor proposed as much as 70% ownership for foreign corporations in all industries and leasing out lands by 40 years to foreign developers. (READ: Monopolies, duopolies hamper PH inclusive growth)

The stock analyst added that Senator Antonio Trillanes IV‘s proclamation of not being a hindrance to Duterte’s reform initiatives helped ease investors’ jitters.

“You can also take into account Trillanes not pursuing impeachment against the presumptive president as positive as it lowers political risks,” Tiu said.

But for Juanis Barredo, chief technical analyst of COL Financial Group, the upbeat stock performance “may continue” for a short while, “but after two to three days of large gains, profit taking is bound to ensue.” – Rappler.com