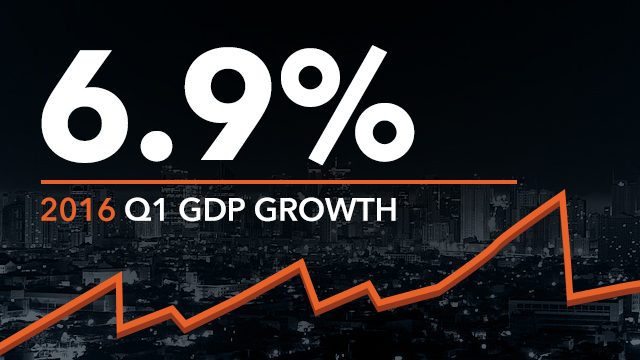 Facebook Twitter Copy URL
Copied
(3rd UPDATE) This makes the Philippines the fastest growing economy in the region, ahead of regional giant China

MANILA, Philippines (3rd UPDATE) – Exceeding market expectations, the Philippine economy grew by 6.9% in the first quarter of 2016, the Philippine Statistics Authority (PSA) announced on Thursday, May 19.

The latest GDP numbers – the highest since the second quarter of 2013 – makes the Philippines the fastest growing economy in the region, ahead of regional giant China, National Economic and Development Authority (NEDA) chief Emmanuel Esguerra said in a news briefing.

The first quarter gross domestic product  (GDP) growth – an improvement on the 5.0% registered in the same period last year, and the now revised 6.5% growth in the fourth quarter of 2015 – beat market expectations of 6.6% growth.

“Overall, the growth prospect of our economy for the next quarters is encouraging. Growth in the second quarter of an election year is usually stronger than in the first quarter. Barring a significant drop in business confidence in the second half, the economy seems to be on track in meeting the full-year target of 6.8 to 7.8%,” Esguerra said.

Esguerra noted that among 11 selected Asian economies that have released their growth data for the quarter, the Philippines was the “fastest-growing economy,” followed by China at 6.7%, Vietnam at 5.5%, Indonesia at 4.9%, and Malaysia at 4.2%.

“The economic performance of our country from 2010 to the first quarter of 2016 remains the highest growth average recorded by the country that is backed by sound macroeconomic fundamentals,” Esguerra said.

In a statement, Finance Secretary Cesar Purisima said: “The running 6-year growth average of 6.2% is our fastest streak since 1978, which when compared to the 3.8% average from 1995-2010 reflects how much we have improved our structural growth capacity.” 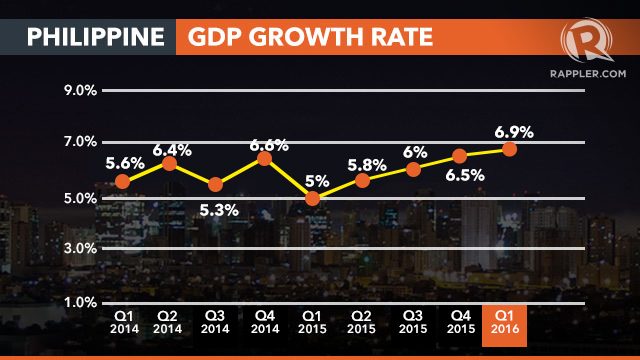 Esguerra said that on the demand side, growth was investment-driven, with significant contribution from investments in durable equipment. He provided the following details:

“All these investments give us confidence that the economy will continue to perform well in the succeeding quarters of the year and beyond,” he said.

Esguerra said while external demand weakened “with growth of exports of goods and services slowing down to 6.6%,” imports of goods is up 15.9% “largely due to increased purchases of capital goods, which again is an indication that firms are investing.”

Services imports was up by 17.5%, significantly higher than last year’s 8.9%.

“The strength of both the industry and services sectors once again shows the ongoing structural transformation taking place in our economy, which is crucial for sustaining economic growth and generating quality jobs,” he said.

Esguerra said the agriculture sector suffered a 4.4%-contraction in the first quarter, due to the impact of El Niño, though this did not affect the rest of the economy.

He noted the need for vigilance in dealing with the lingering impact of El Niño, and preparations for La Niña “which now has a 75% probability of occurrence.” 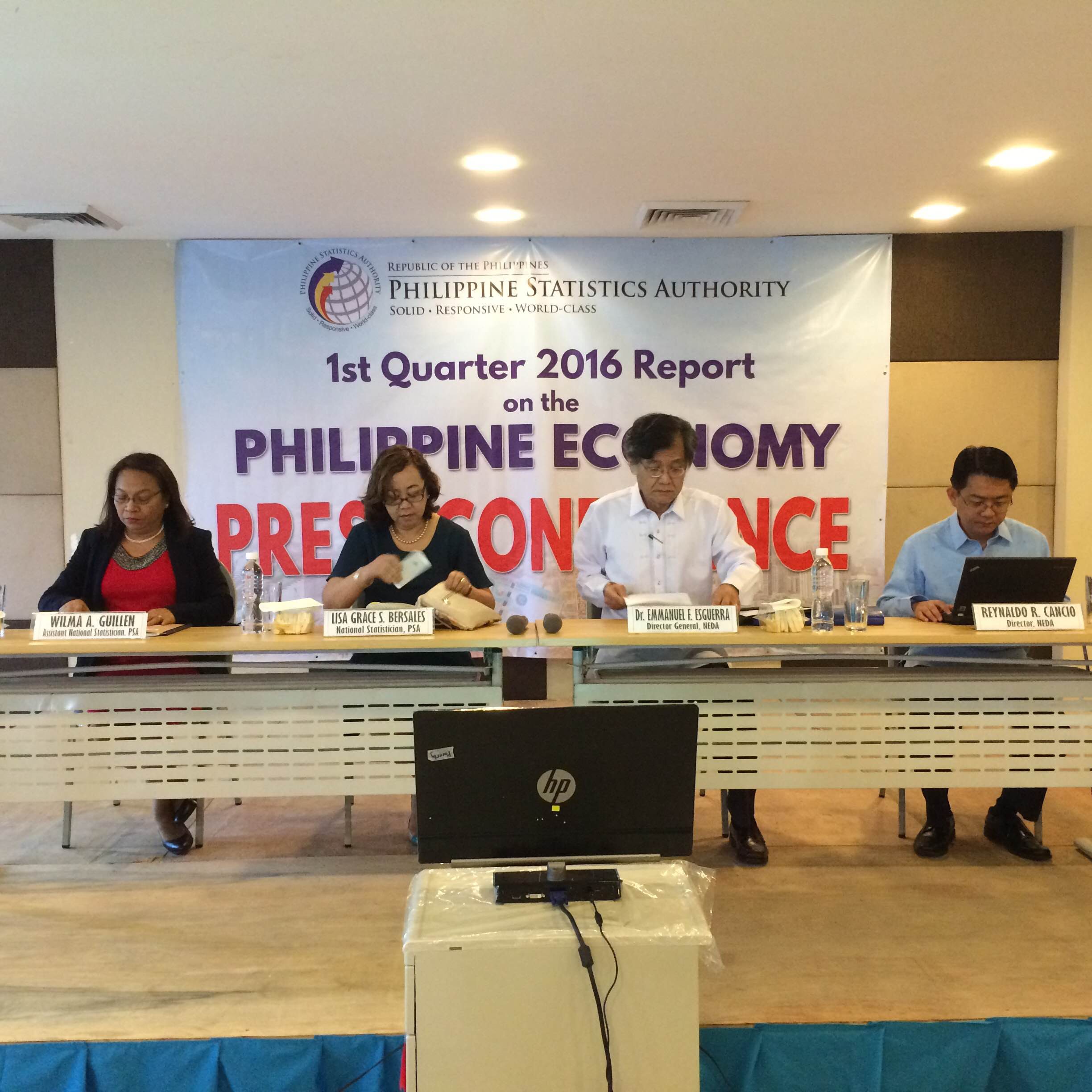 Esguerra said the Aquino administration will turn over a “strong and stable economy onto the next administration,” as he stressed the importance of “policy consistency, which is important for sustained business confidence.”

“We have achieved significant socioeconomic progress over the last 5 years with the return of political and economic stability, which we hope the incoming administration will build on. We should not miss the current second wave of foreign investments into the region, especially now that we have finally become an investment destination of choice,” he said.

The first 3 months of 2016 saw the continued acceleration of government spending from last quarter as well as improvements in overseas Filipino workers’ remittances, which grew by 4.3%, as well as foreign direct investment (FDI) which grew by 50% in the first two months of the year.

Strong domestic consumption, a mainstay of the Philippine economy, was further boosted at the start of the year by the recently concluded elections which saw Rodrigo Duterte emerge as president-elect.

Duterte, in his 8-point economic agenda, promised to keep the Aquino administration’s macroeconomic policies and accelerate infrastructure spending, while strengthening focus on the lagging agricultural sector.

Duterte has also expressed openness to lifting the constitutional restriction on foreign ownership of companies, which has long been the bug bear of foreign investors.

Some of this optimism was tempered, however, by a weak global environment beset by volatility. Tepid global growth was blamed for a drop in exports which dropped a total of 8.4% from January to March 2016.

Multilateral institutions have backed the country to broadly maintain its growth momentum with the World Bank forecasting growth this year at 6.4%. The IMF placed the Philippines ahead of the ASEAN-5 pack with a projection of 6% growth.

In a statement, Presidential Spokesperson Edwin Lacierda welcomed the result and reiterated the President’s guiding principle “to leave the country in a far better state than when he first found it.”

“With our peers in the international community having acknowledged our progress, it is now up to the next administration to build on the gains we have recently achieved – so that they may further redound to our nation’s improvement, for the benefit of generations to come,” he said. – Rappler.com