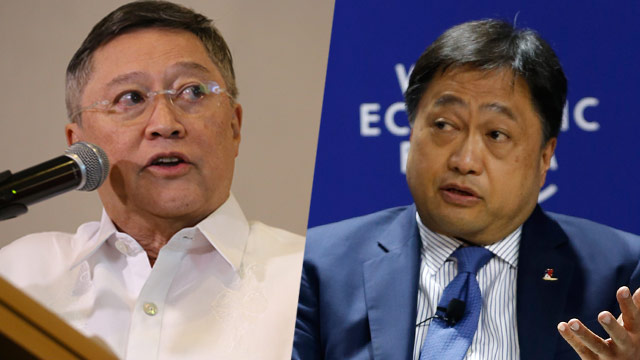 MANILA, Philippines – Finance Secretary Cesar Purisima met with his successor Carlos Dominguez on Friday, May 20, seeking to implement a smooth transition of power on June 30.

The Department of Finance (DOF) said in a statement on Monday, May 23, that Purisima personally welcomed Dominguez as the next chief and discussed transition plans with him.

“After speaking on the phone to congratulate Mr Dominguez last Thursday, he and I met the next day to begin the transition process,” Purisima was quoted as saying.

The DOF said it is preparing a transition document detailing the progress of all clusters, including revenue, liability management, privatization, government-owned and controlled corporations (GOCCs), and corporate affairs.

The department said it will give the document to Dominguez “to keep the new leadership abreast on where things are with the DOF’s priorities and projects.”

Aside from this, Purisima said he will also pass on a manual of institutional knowledge to Dominguez and his team, which will contain the learnings over the past 6 years.

“To be finished by the end of June, it will contain 4 volumes of documented learnings in the DOF over the past 6 years of the Aquino administration – best practices from the DOF Institute, learnings on what could have gone better, and recommendations moving forward,” Purisima said.

The department is also upgrading the 5th and 6th floors, as well as the roof deck, of its headquarters.

“We want to ensure the new team has all the means and resources to succeed on day one. My team is coordinating with his in order to work with depth over the next month on a smooth transition,” Purisima said.

Ready to pass the baton

Purisima was all praises for Dominguez, describing him as “an esteemed businessman and public servant with a lengthy record of excellence.” (READ: A peek into Rodrigo Duterte’s campaign team)

For the outgoing Finance chief, Dominguez has all 3 qualities needed to lead the department.

“There are 3 important things for any Finance Secretary: having the ear of the President – having the stomach to stand firm in advising him soundly even in the face of opposing political tides, having an understanding of government and an appreciation for good governance, and lastly, having an understanding of how business works and the economic landscape you’ll be navigating. Mr Dominguez has all 3,” Purisima said.

He is also confident that the new economic team will be ready to sustain and improve gains from the past 6 years.

“We extend our best wishes of success and look forward to officially passing the baton on June 30,” Purisima said.