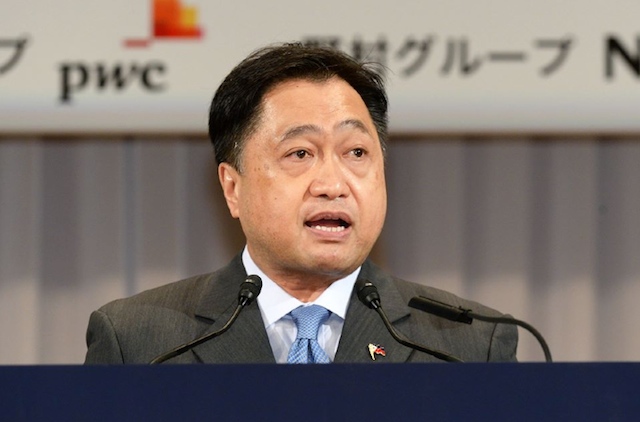 MANILA, Philippines – The incoming administration will have enough fiscal room to ramp up investments in infrastructure and social services for the medium term, outgoing Finance Secretary Cesar Purisima said on Friday, June 3.

In a statement, Purisima noted that the Philippines has freed itself of structural and fiscal constraints as over the last years, the government had built the right foundations and set the stage for wider policy options to sustain growth.

The finance chief said he will support the next administration’s intention to double down on spending, raise the deficit ceiling, and increase borrowing.

The Department of Finance (DOF) said the Philippines has increased national government and tax revenues by at least two-thirds from pre-2010 levels.

Purisima said he is convinced that there is enough confidence and fiscal space to support a “more expansionary” fiscal policy stance.

“For so long as the current growth trajectory is maintained, growth-inducing expenditures will keep having more and more room to comfortably expand,” Purisima said.

The finance chief will even pass on to his successor Carlos Dominguez III tax reform recommendations that are estimated to generate P164.5 billion to P351 billion in revenues for the first year of implementation.

“A tax reform effort can further spur long-term, equitable, and inclusive growth without sacrificing the country’s macroeconomic position – as long as the measure is kept revenue-positive and helps push the tax effort to 16% of gross domestic product (GDP),” Purisima said.

Hailing the Philippines as the most upgraded investment-grade sovereign, Purisima said the next administration is likewise in a position to tap the markets to finance aspirational growth requirements, if needed.

With a record debt-to-gross domestic product (GDP) level of 44.8% in 2015 and low-weighted average interest rates, DOF said the Philippines has reasonable room to maneuver.

Purisima expressed confidence in the incoming economic team, which he said “has the experience and expertise to navigate a fiscally sustainable path in today’s lending environment.”

“Awash with hope, the Philippines enters its best period yet,” Purisima said.

Aside from Dominguez, among the incoming economic managers are former budget secretary Benjamin Diokno who will return to the budget department, and economist Ernesto Pernia as socioeconomic planning secretary. (READ: LIST: Who’s who in the incoming Duterte Cabinet) – Rappler.com