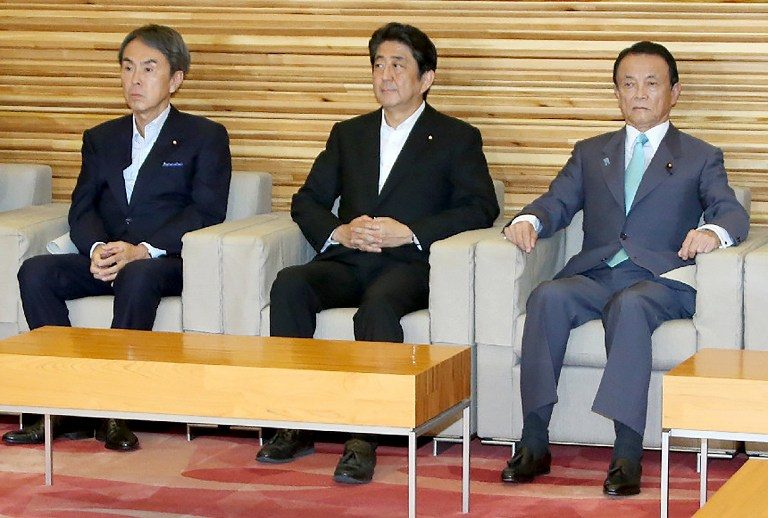 Facebook Twitter Copy URL
Copied
The $273-billion package, which includes tens of billions of dollars for infrastructure spending, is expected to be approved by parliament in September

TOKYO, Japan – Japan’s Cabinet on Tuesday, August 2, approved a mammoth 28-trillion yen ($273 billion) package in its latest attempt to stimulate lackluster growth, including cash to improve infrastructure and raise the birthrate in the aging nation.

The stimulus plan announced last week is the latest in a series in recent years designed to fire up the world’s number 3 economy.

“We have been able to put together a strong package that includes bold investment for the future,” Prime Minister Shinzo Abe said Tuesday before the Cabinet meeting which gave it the green light.

It includes 6.0 trillion yen in low-interest loans and just 7.5 trillion yen in fresh spending – about a quarter of the total – by the national and local governments over the next several years.

About 4.6 trillion yen is for spending in the current fiscal year ending March 2017.

The package is expected to be approved by parliament next month.

It comes after the Bank of Japan disappointed markets with modest tweaks to its own stimulus measures last Friday, July 29.

The government’s stimulus includes help for small firms expected to be hit by Britain’s vote last month to exit the European Union.

About 1,000 Japanese companies, big and small, do business in Britain and many use London-based offices as a staging point for the European market.

Britain’s shock vote to leave the EU also sparked a rally in the yen as investors flocked to an asset seen as a safe haven.

Cash payouts to low-income earners and for disaster relief were also on tap, with money set aside for areas of southern Japan hit by deadly quakes in April that left 49 dead and caused widespread damage.

Some funds would also be tapped for areas hit by the 2011 quake-tsunami disaster.

Tens of billions of dollars are earmarked for infrastructure spending, media said, including the first leg of a new maglev train line from Tokyo to Nagoya, about 290 kilometers (180 miles) away.

The train – short for “magnetic levitation” – can hit a top speed of over 600 kilometers an hour.

Other money will be used to fund day care centers and nursing homes as Tokyo tries to boost the birthrate and the workforce in the rapidly aging nation.

“What Japan needs to do is to spur more demand and increase productivity by pushing through deregulation, increasing the nation’s potential growth rate,” said Nomura Securities economist Masaki Kuwahara.

Mizuho Securities said before the package was confirmed that it was likely to underwhelm.

“There is nothing groundbreaking here,” it said of details reported in Japanese media.

Doubts are growing over a more than 3-year-old bid by Abe to spur growth, dubbed Abenomics, as Japan’s social welfare costs inflate one of the world’s biggest national debts.

Abenomics – a mixture of massive monetary easing, government spending, and red-tape slashing – had brought the yen down from record highs and made Japan’s exports more competitive. But that has not been enough to deliver consistent growth. – Rappler.com