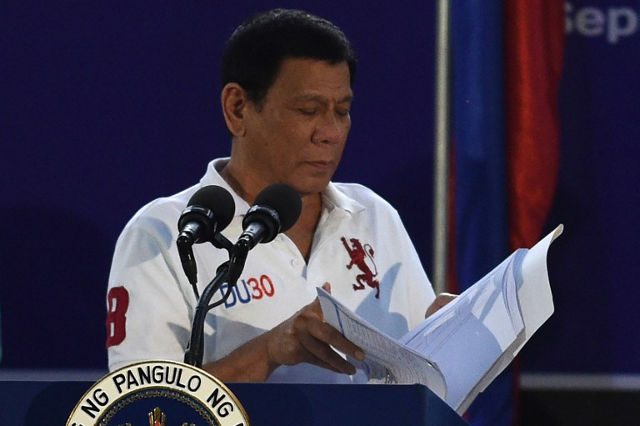 Facebook Twitter Copy URL
Copied
(UPDATED) S&P maintains its stable outlook for the Philippines, but highlights a range of 'weaknesses' under the Duterte administration

S&P maintained its stable outlook for the Philippines, but highlighted a range of “weaknesses” under the new Duterte administration that also included his foreign policy and national security statements.

“The president has a strong focus on improving ‘law and order’, which has allegedly resulted in numerous extrajudicial killings since he came to power,” S&P said.

“This could undermine respect for the rule of law and human rights through the direct challenges it presents to the legitimacy of the judiciary, media and other democratic institutions.

“When combined with the president’s policy pronouncements elsewhere on foreign policy and national security, we believe that the stability and predictability of policymaking has diminished somewhat.”

Duterte won elections in a landslide in May after vowing an unprecedented crackdown on illegal drugs in which 100,000 people would die.

About 3,000 people have been killed since he took office on June 30. About a third of the victims were shot dead by police and the rest murdered by unidentified attackers, according to official statistics. (READ: IN NUMBERS: The Philippines’ ‘war on drugs’)

Duterte has vowed to ignore a wave of international condemnation over the killing spree, with US President Barack Obama, the European Parliament, and the United Nations among the many critics.

He has typically used abusive language in responding to the criticism, branding Obama a “son of a whore” and UN chief Ban Ki-moon a “fool”, and lifting his middle finger while saying “fuck you” to the European Parliament.

Duterte has also sought to loosen the Philippines’ decades-old alliance with the United States, such as by saying he wanted to kick out US troops who are in the country for anti-terrorism efforts, while courting Chinese investment. (READ: Duterte on US troops: ‘I never said go out’)

Nevertheless, the charismatic 71-year-old remains wildly popular as many Filipinos embrace his promise of a quick solution to the deep-rooted crime problem.

The Philippines enjoyed strong economic growth during the previous administration of Benigno Aquino III, who was required by the constitution to stand down after a single term of 6 years.

S&P, as well as competitors Moody’s and Fitch rating agencies, in 2013 all raised the Philippines to investment-grade level for the first time, indicating a lower risk to investors.

But it highlighted “rising uncertainties surrounding the stability, predictability and accountability” under Duterte’s leadership.

Finance Secretary Carlos Dominguez III said in a statement also on September 21 that S&P’s decision to maintain investment grade ratings was “good news as it affirms that the Duterte administration is on the right track in pursuing its 10-point socioeconomic agenda that aims to keep the Philippine economy on its high growth path.”

At the same time Dominguez argued against the opinion of S&P that predictability of policymaking in the Philippines has “somewhat diminished.”

The finance chief pointed out that the administration’s economic pronouncements have been clear and consistent from the very beginning, highlighting the fact that the Duterte administration’s 10-point socioeconomic agenda was announced early –prior to the President’s formal inauguration – and that the action plans to realize the agenda have already been operationalized.

“The Duterte administration is loud and clear in its message. We want to achieve a kind of economic growth that is not only robust and sustainable but one that actually lifts significantly more Filipinos out of poverty,” Dominguez said.

“If one is able to see through the noise created by negative headlines, he may have better and comprehensive understanding of the exciting, positive changes that are ahead of the Philippines,” he added. – Rappler.com