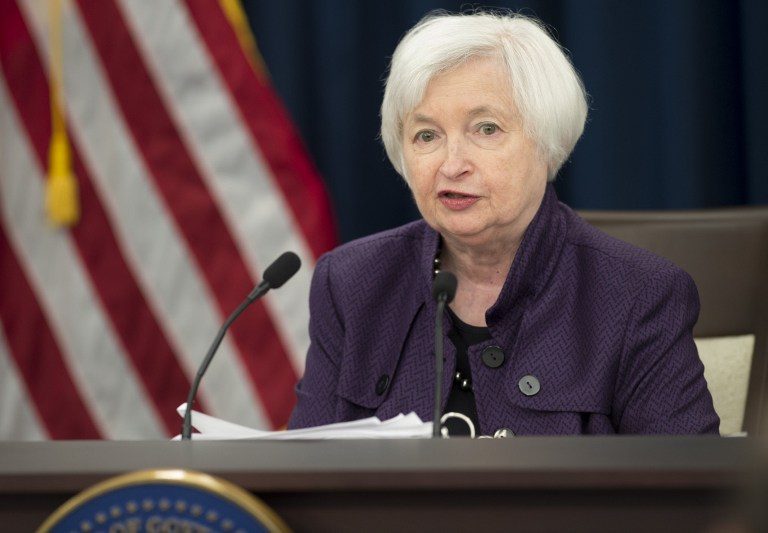 WASHINGTON, USA – The Federal Reserve kept its benchmark interest rate unchanged for the 6th straight meeting Wednesday, September 21, saying it needs to see a bit more sign of strength in the US economy.

While hailing a pickup in activity since the sluggish first half of the year, the US central bank showed uncertainty about some persistent weak signs in the economy, and cut its 2016 growth forecast to 1.8%, down from 2.0% in June.

Yet the policymakers on the Federal Open Market Committee displayed confidence the rebound would continue through the second half, and indicated that they foresee one quarter-point rate hike before the end of the year, and possibly two in 2017.

For the time being, though, they said they still needed more evidence that the economy was headed to full employment, as the jobless rate sits at 4.9%, and that inflation would pick up and move toward their 2.0% target.

“We judge that the case for an increase has strengthened, but decided for the time being to wait for further evidence of continued progress toward our objectives,” said Fed Chair Janet Yellen.

That left the benchmark federal funds rate at an ultra-low 0.25-0.50%, still above the negative rates of the European and Japanese central banks but well below what the Fed itself had envisioned at the beginning of 2016.

The two-day FOMC meeting nevertheless showed the strongest division over policy since December 2014, with 3 of the 10 voting members arguing for a rate rise now.

“The Fed left rates on hold but open warfare has now broken out,” quipped Ian Shepherdson of Pantheon Macroeconomics.

But he called the Fed statement in its whole “unambiguously more hawkish than in July,” predicting a hike in December.

The Fed meeting book-ended a day which began with the Bank of Japan embarking on an innovative new stance of targeted long-term bond yields to fight disinflation and get its economy moving.

Yellen made clear that weak inflation was still the anchor holding US monetary policy down, but that the issue was of a different degree to Japan’s.

“We are a long way from facing the problems that Japan faces,” she told reporters after the meeting.

Analysts said the Fed nevertheless left open the possibility of not taking any rate action before 2017.

Nariman Behravesh and Sara Johnson, economists at IHS Markit, said in a client note that the FOMC stance certainly leaned toward a December increase.

“That said, such a rate hike is far from inevitable. In the past year, market volatility and Brexit have given the Fed pause. Any nasty political shock or any signs of further weakness in the economy could delay the next interest rate increase even longer.”

They did not specifically say it, but such a political shock could include the election of Republican candidate Donald Trump to the White House.

Trump’s sometimes unorthodox comments on US fiscal and monetary policy, including accusing Yellen of being a tool of President Barack Obama, could inject nervousness in financial markets, as did Britain’s June vote to pull out of the European Union.

“I can say emphatically that partisan politics plays no role in our decisions,” she said.

“We do not discuss politics at our meetings and we do not take politics into account in our decisions.”

Yellen said the FOMC has to thread the needle between stifling growth with a premature increase and allowing the economy, feeding on a decade of easy money, to get away from them.

On balance she expressed more concerns about the threat of overheating, saying the current pace of job creation, at 180,000 a month, “is not sustainable over the longer run.”

“Policy needs to be forward-looking. we don’t want the economy to overheat,” she said. – Rappler.com