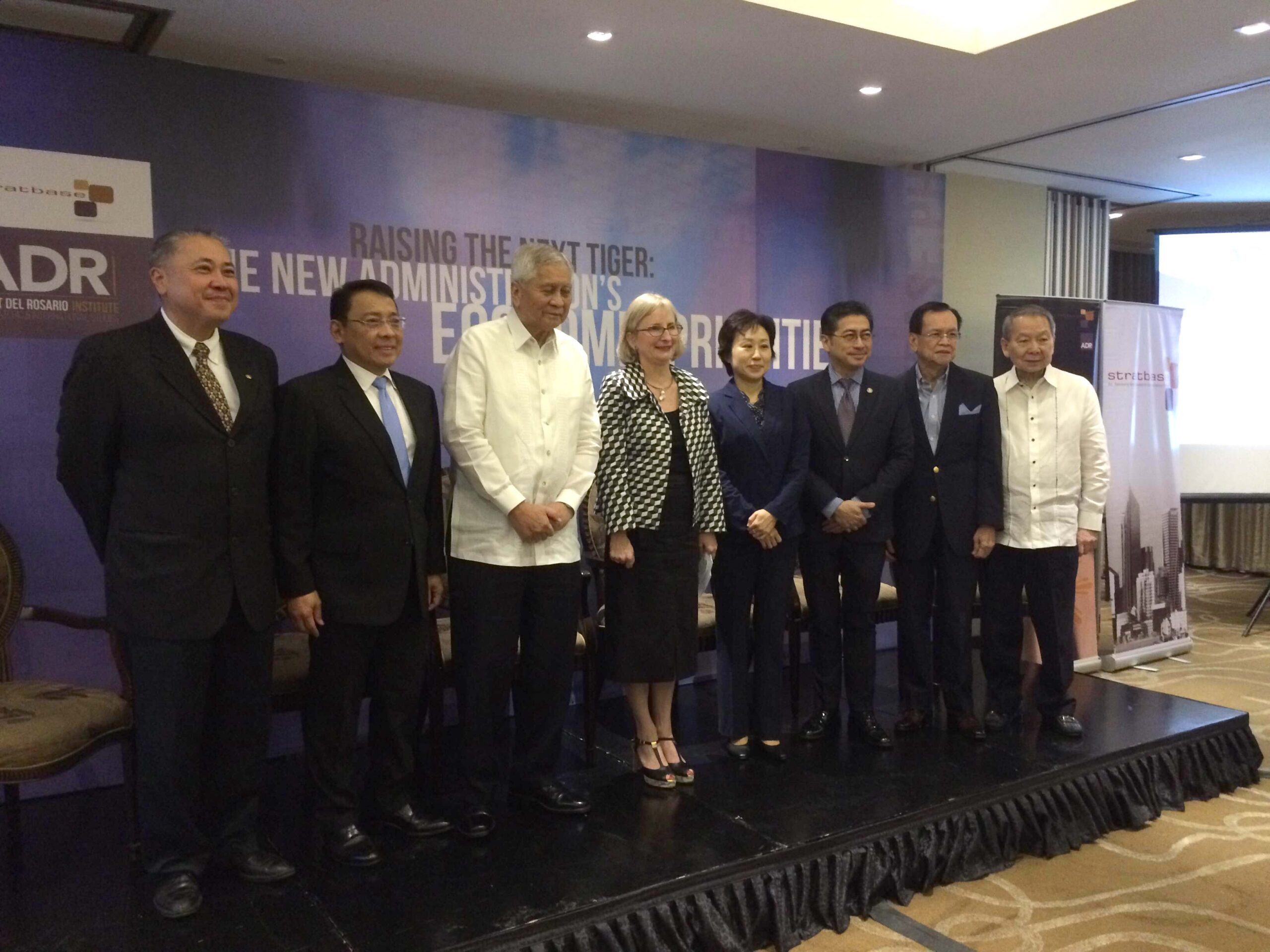 Facebook Twitter Copy URL
Copied
'In foreign affairs, you try to get as many friends as possible. You don't get one friend at the expense of another friend,' says former Philippine foreign secretary Albert del Rosario

MANILA, Philippines – Former Philippine foreign secretary Albert del Rosario urged the Duterte administration to consider the wider implications of its foreign policy that has seen the country distance itself from its traditional allies.

The former Department of Foreign Affairs (DFA) chief spoke at a forum called “Raising the Next Tiger: The New Administration’s Economic Priorities,” which was organized by the Stratbase-Albert del Rosario Institute on Wednesday, September 28. As foreign secretary under the Aquino administration, Del Rosario led the government team that filed a historic case against China over the West Philippine Sea, which Manila won in July 2016.

“I think the foreign policy of equating the US vis-à-vis China should not be a zero-sum game. In foreign affairs, you try to get as many friends as possible. You don’t get one friend at the expense of another friend,” he explained.

“Playing a zero-sum game is illogical and we should get away from this.”

Manila’s relationship with Washington has been strained in recent weeks, punctuated by President Rodrigo Duterte’s tirades against US President Barack Obama.

Duterte has also downplayed the country’s military alliance with the US so as not to antagonize China – though Foreign Secretary Perfecto Yasay Jr has since denied the President wants to end joint drills with the US.

Duterte has also made headlines for criticizing the United Nations, which has expressed alarm over the spate of extrajudicial killings believed to be linked to his administration’s war on drugs.

At the same time, the President has made overtures to China and Russia and outlined the possibility of deepening economic ties with the two as part of a new independent foreign policy.

“I would like to question this in a humble, respectful way because our foreign policy is driven by our democratic values. Therefore, our foreign policy must be principled, it must be anchored on democracy, freedom, respect for human rights, good governance, and the rule of law,” Del Rosario said.

Del Rosario said that to demonstrate a foreign policy anchored on democratic values, “the country had aligned itself with countries who have embraced an international norm that is in accord with the rule of law.”

This, he added, “must be revisited in order to move the economy forward because it’s been demonstrated that we can’t do this alone; we need to have friends in this village of nations that we belong to.”

On that point, he urged the government to take into account the economic cost of its diplomatic pivot.

“Has anyone in government sat down to calculate the probable loss of economic benefits if we pursue the policy we are now pursuing in the name of an independent foreign policy?” Del Rosario said.

“In terms of current arrangements, in the last 3 years alone from 2012 to 2015, over a 3-year period we had development assistance that we were able to raise of over $4 billion. We will lose that.”

The country’s former top diplomat noted that the Philippines has military financing from the US worth $140 million in 2016 alone.

“These have conditionalities when they go to US Congress [for approval]. Respect for human right is one conditionality. We will lose that,” he said. (READ: US senator warns PH of ‘further conditions’ on aid)

“For traders, [we have] the Generalized System of Preferences (GSP) with the United States, which we utilize something like $800 million of, and the GSP+ with the EU. We will lose that,” Del Rosario added.

The GSP is a trade program that promotes economic growth in developing nations by eliminating tariffs for selected imports. Last year, the Philippines was the 5th largest beneficiary of the scheme, according to the US Trade Representative.

The Philippines is also currently in negotiations with the EU for a trade deal, having already gained beneficiary country status for the EU-Generalized System of Preferences Plus (EU-GSP+).

September has seen a continuous outflow of foreign capital from the local stock market and the peso weakening. These are happening despite the country having grown faster than any other major region, with its solid macroeconomic fundamentals.

“I think that we are in a position now where we have to think about this,” Del Rosario said, adding that he thought the Aquino administration’s greatest legacy was restoring a sense of confidence both here and abroad.

“Confidence has been restored in our country. An immense amount of confidence. Let’s not lose it.” – Rappler.com