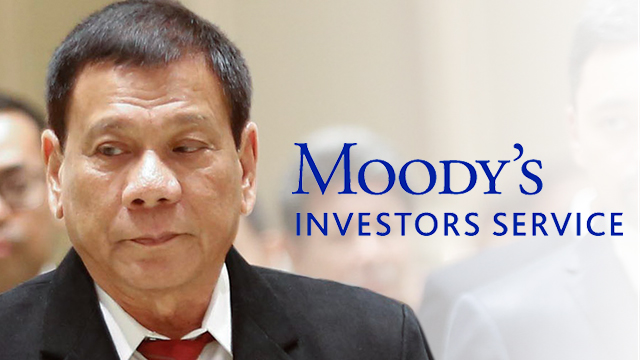 MANILA, Philippines (UPDATED) – Moody’s Investors Service has raised its full-year economic outlook for the year and could eventually boost the country’s credit rating if the Duterte administration’s planned reforms are implemented correctly, despite increased political uncertainty.

In its Annual Credit Analysis released on Monday, October 17, the credit rating agency described the Philippine government’s tax reform plan and its push for higher infrastructure spending as “being anchored in a well-defined development agenda.”

“In particular, an acceleration of infrastructure development and the passage of comprehensive tax reform would be credit positive,” the Moody’s report said.

Moody’s currently assigns the country a rating of Baa2, a notch above the minimum investment grade with a “stable” outlook, indicating it is unlikely to change over the short term.

The ratings agency said it also expects the Philippine economy to expand by 6.5% this year and in 2017, faster than its previous estimates of 6.2% and 6%, respectively.

Beyond the two reforms, Moody’s said a sustained rise in government revenues and a better external debt profile could help improve the country’s credit rating.

A more significant decline in the government’s foreign-currency debt would also be credit positive, according to Moody’s.

“The positive mention by Moody’s of the tax reform and infrastructure plans of the Duterte administration proves that by looking beyond headline noise, one would see sound macroeconomic fundamentals and a robust, credible, and sensible overall socioeconomic development agenda for the Philippines,” he said.

The government’s financial strength and the ability of the country’s institutions to implement policies were both graded as moderate.

Moody’s also said the country’s susceptibility to risks that could potentially force government to default on its debts is low.

It’s also unlikely that there would be banking system woes.

Finally, the credit watchdog said the Philippines’ vulnerability to external shocks is also low, given its current account surplus.

Despite the stable outlook, however, Moody’s expressed concern regarding increased political uncertainty.

“The President’s rhetoric towards critics of the war on drugs, including the US and the European Union, has the potential to strain long-standing security and trade relations. Nonetheless, the President’s pronouncements – including a threat to wind up joint military exercises with US armed forces – have not led to official policy changes,” the report read.

“Recent statements by top American and Filipino defense officials suggest that the Philippines’ relations with its most important strategic partner remain bound by a Mutual Defense Treaty signed in 1951. In the absence of a well-formulated articulation of the Duterte government’s foreign policy, geopolitical risks have become more unpredictable, although still low,” it added.

“Progress on this agenda could ultimately depend on how the President deploys his considerable political capital; a sustained focus on political matters could detract attention away from economic and fiscal reform.” – Rappler.com