PH one step closer to membership in China-led AIIB 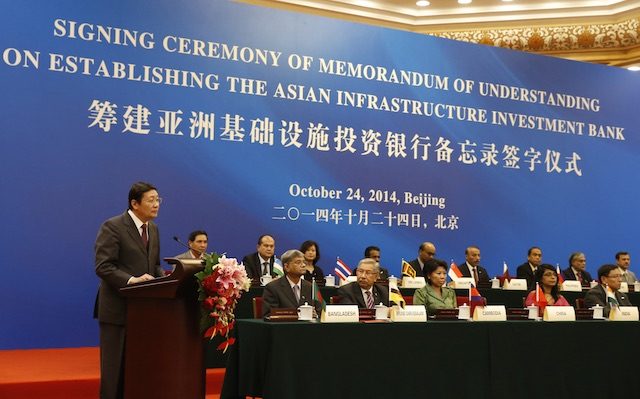 MANILA, Philippines – The Senate has adopted on second reading a resolution that would allow the Philippines to join the China-founded Asian Infrastructure Investment Bank (AIIB).

On Tuesday, November 29, senators adopted on second reading Senate Resolution No. 241 or the “Resolution Concurring in the Ratification of the Articles of Agreement of the Asian Infrastructure Investment Bank.”

The resolution needs to secure a two-thirds majority vote on its third and final reading to be effective. This is expected to happen before Congress adjourns for the holidays.

Senator Loren Legarda, chair of the Senate committee on foreign relations, said in her sponsorship speech on Tuesday that full membership in the AIIB “could provide an annual financing window to the Philippines of about $200 million to $500 million.”

She also pointed out that the country stands to gain from reduced trade costs of about 15.6% of trade value and a real income gain of about $220 billion if the infrastructure gap in the country is reduced, based on a 2009 report of the Asian Development Bank (ADB).

Legarda also noted that Asia faces a massive infrastructure deficit and that among ASEAN nations, only the Philippines and Malaysia have yet to deposit its instruments of ratification to gain full membership.

She reminded her fellow senators that the Philippines only has until December 31, 2016,  to make this submission and to pay its initial capital contribution.

While waiting Senate concurrence, the country’s economic managers have begun setting the required funds in the government’s budget for 2017

Headquartered in Beijing, China and formally established late last year, the AIIB has 57 members, including Australia, France, Germany, India, South Korea, and Russia. Two notable omissions however are the US and Japan and the bank is seen by some analysts as a rival to the World Bank and the ADB. – Rappler.com