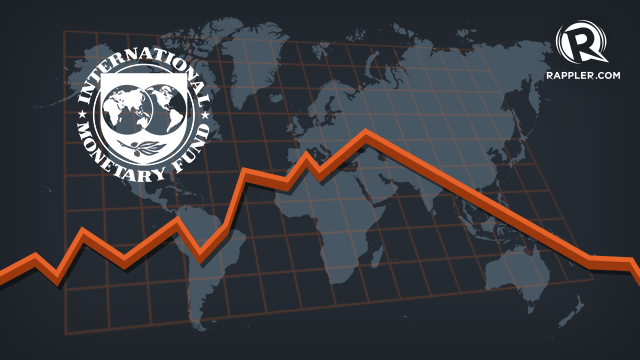 WASHINGTON, United States – The International Monetary Fund (IMF) cut its growth forecast for the global economy, pointing to the threat from the Ukraine crisis and the slowdown in major emerging economies.

While the world economy has picked up pace, anchored by the United States and China, the global crisis lender pointed to looming risks, from the standoff between Russia and the West over Ukraine, to poorly handled policy in countries like Brazil, and deflation in the euro area.

“The recovery which was starting to take hold in October is becoming not only stronger, but also broader,” said chief IMF economist Olivier Blanchard, introducing the IMF’s latest World Economic Outlook report.

“The various brakes that hampered growth are being slowly loosened. Fiscal consolidation is slowing, and investors are less worried about debt sustainability.”

The report, released ahead of the annual IMF-World Bank spring meetings in Washington beginning Thursday, nevertheless cut back the global growth forecast to 3.6% this year and 3.9% in 2015. The global economy grew 3% in 2013.

Each estimate was trimmed by 0.1 percentage points from January, with the downgrade based on data before Ukraine plunged into crisis with an anti-government revolt and Russia’s annexation of Crimea.

Blanchard said the outlook for Russia, already sagging before the crisis, could likely be worse now, as it loses income from energy sales and sanctions from the West begin to bite.

But other worries have mounted since the beginning of the year, including the ability of emerging economies like Brazil, South Africa and Turkey to deal with higher interest rates, lower capital flows and lower commodity prices.

It said the “worrying” emerging market downturn grew from domestic policy shortcomings and tighter financial conditions both domestically and internationally.

Those economies remain especially vulnerable to market turbulence as the Federal Reserve slowly tightens US monetary conditions, the IMF said.

The United States itself, compared with one year ago, has become a relative bright light for the world, with the IMF saying it will grow 2.8% this year and 3% next, unchanged from its January prediction despite the beating the US economy took from severe winter weather.

One key advance is the end of the US political battle over the budget, which put the country on the edge of default on its debts and spread uncertainty throughout the world economy.

The suspension of the country’s borrowing limit until next year – necessary to keep funding the US deficit in the short term – has restored confidence in Washington’s economic management, and now the Fund sees the US pushing ahead, though still fighting to get demand back to a more normal, self-sustaining level.

China, too, continues to pull its weight, despite a sharp slowdown. The IMF’s forecasts are unchanged, seeing growth at 7.5% this year and 7.3% next, on the belief that Beijing will keep a firm hand on the financial frailties coming to the surface now.

“This projection is predicated on the assumption that the authorities gradually rein in rapid credit growth and make progress in implementing their reform blueprint,” the IMF said.

“The likelihood of a hard landing in China after overinvestment and a credit boom continues to be small because the authorities should be in a position to limit the damage.”

However, it warned, if China does not handle well the problems in the financial system, “spillovers to the rest of the world, including through commodity prices, could be significant.”

But demand growth is weak, companies are still laden with debt and credit and credit demand is tepid, and Blanchard said the European Central Bank needs to move to counter dangerously low inflation.

He said the ECB has already studied its various options for more economic stimulus.

“I know that the ECB is looking at them,” he told reporters.

“And we hope that they will implement them as soon as they are technically ready to do so.”

“Everything should be done to try to avoid” deflation, he said.

Japan is in a similar situation, its stimulus still facing challenges, including deflation and last week’s hike in consumption taxes, which could send the economy into recession this quarter. The forecast for growth this year was cut to 1.4% from 1.7%, and only 1% next year.

The most serious problem the IMF sees is the one that has Russia at odds with the West over Ukraine. The IMF slashed its prediction for Russian growth to 1.3% this year, compared with 1.9% in January, but Blanchard said the crisis probably merits a further cut to the outlook.

The turmoil has sparked an exodus of capital from Russia which could force it to increase interest rates.

In addition, intensified sanctions and counter-sanctions could disrupt trade and finance, including in markets for oil, gas and food commodities, including corn and wheat.

“So for all these reasons we think that this could lead to low growth in Russia,” he said. – Rappler.com