Jul 3, 2014 3:41 PM PHT
Rappler.com
Facebook Twitter Copy URL
Copied
The Bureau of Customs is alarmed that even Filipino brands are being counterfeited 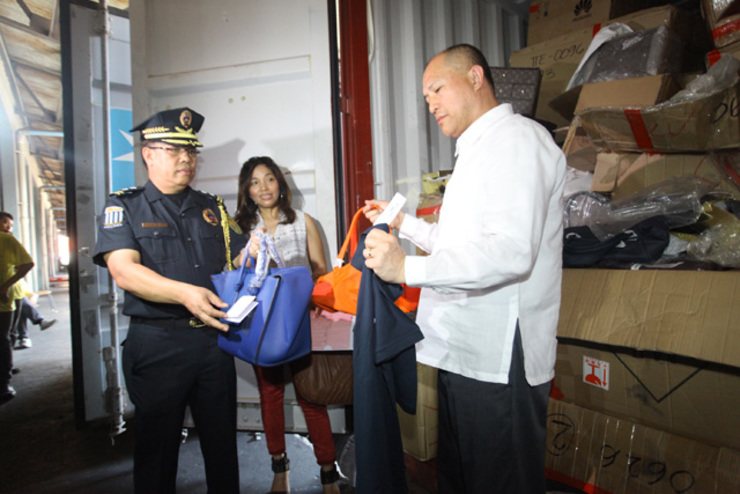 MANILA, Philippines – The Bureau of Customs (BOC) seized two shipments of counterfeit goods with an estimated value of over P556-million ($12.74 million*) at the Manila International Container Port (MICP) on Thursday, July 3.

The shipment included “Class A” bags and clothing bearing faked marks from a local brand.

“What is alarming to us is that even local brands are victims of counterfeiting which will cause more harm to our entrepreneurs, causing them to become unprofitable and unproductive, which, in the end, may threaten hundreds of jobs,” said Willie Tolentino, BOC Director of Enforcement and Security Service.

The first shipment from China, a 20-foot container van that arrived at the MICP in March,  was consigned to Bangladesh Business Corporation.

The proprietor of the said firm denied ownership of the shipment.

Both shipments will be subjected to seizure and forfeiture proceedings, then the seized goods will be destroyed. Customs authorities have also coordinated with the Intellectual Property Office (IPO) of the Philippines to alert the brand owners.

The consignees and their customs brokers are also under investigation for smuggling-related cases, as well as violation of Republic Act (RA) 8293, or the Intellectual Property (IP) Code of the Philippines.

Tolentino noted that smuggled counterfeit goods have a “negative impact…[on] legitimate businesses in the country.”

From January to June 2014, the inter-agency National Committee on IPR (NCIPR), which includes the BOC, seized counterfeit products worth over P6.8-billion ($155.75 million), up 215% year-on-year.

In April, the crackdown against the proliferation of fake goods prompted the United States Trade Representative (USTR) to remove the Philippines from the Special 301 Watch List, an annual report of countries with weak enforcement and observance of intellectual property laws, after nearly 20 years of being on it. – Rappler.com