Aug 28, 2014 10:06 AM PHT
Rappler.com
Facebook Twitter Copy URL
Copied
Philippine growth accelerates to 6.4% from the revised 5.6% in the first quarter of the year 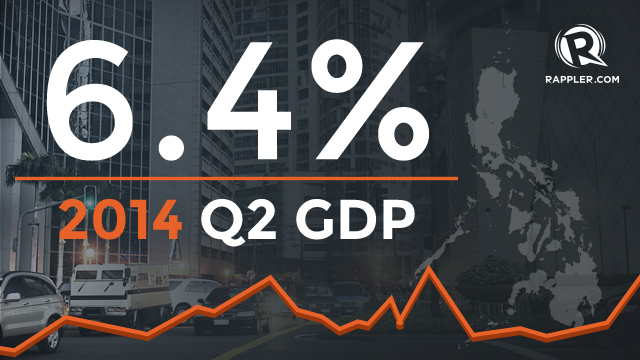 The private sector took the lead as the economy recovered from a modest expansion of 5.6% in the first quarter, which was partly due to the impact of devastating natural disasters.

Coming from the “high base” growth of 7.9% in the second quarter of 2013, Economic Planning Secretary Arsenio Balisacan said the economy was “back on the higher trajectory of growth.”

Balisacan said the Philippines’ growth was the second fastest in Asia, next only to China, which grew 7.5%, and tied with Malaysia. “We remain as one of the bright spots in the region.”

He cited the strong performances of the industry and services sectors for much of the recovery, offsetting lower government spending partly blamed on “administrative bottlenecks.”

Industry grew 7.8% on robust manufacturing, while the services sector expanded 6%, buoyed by trade, real estate, and renting and business activities. The agriculture sector grew 3.6% after a 0.2% contraction in the previous quarter, due to a big turnaround in major crop harvests. 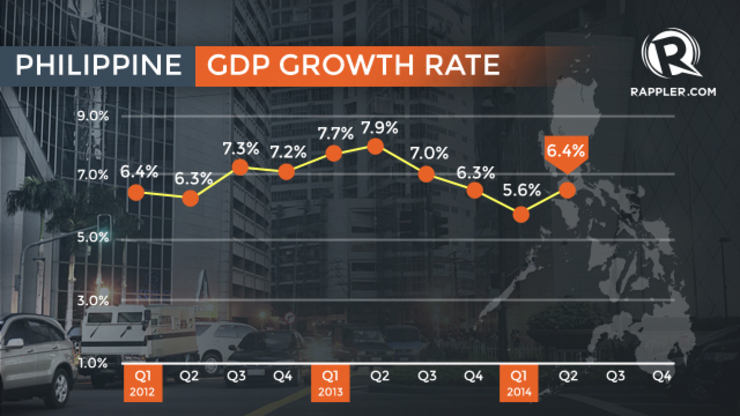 The latest figures brought growth for the first half of 2014 to 6% and boosted optimism that the country would still attain its target of 6.5% to 7.5% growth for the whole year, Balisacan said.

Independent economists gave guardedly optimistic assessments for the Philippines, a nation of 100 million people which in recent years has seen its economy surge after long lagging behind most of its Asian neighbors.

The Philippine economy grew 6.8% in 2012 and 7.2% in 2013, but there are concerns about the sustainability of such strong numbers.

“It’s a decent rebound but there are still challenges ahead,” Johnathan Ravelas, chief market strategist of BDO Unibank, one of the country’s largest banks, told AFP.

Ravelas cited as among the potential threats the barrage of storms that hit the Philippines, particularly in the second half of the year, and emerging “political noise” as the 2016 national elections get closer.

He also said the government needed to accelerate spending to address the need for better infrastructure and more reliable energy sources.

Balisacan told reporters that state spending would increase with urgency, saying “the identified administrative bottlenecks that contributed to the underperformance of the government sector are being addressed.”

He said the government had dealt with delays in approving rehabilitation projects for communities devastated by Super Typhoon Yolanda (Haiyan), the most powerful storm ever to hit land, in November last year. (READ: ‘PH growth depends on speed of Haiyan rehab’)

The storm left more than 7,300 people dead or missing across farming and fishing areas of the central Philippines.

Some government agencies also posted lower-than-programmed disbursements for infrastructure and other capital outlays, resulting in the decline in public construction, according to the economic chief.

Balisacan said they’re banking on government spending to drive growth for the rest of the year.

“Government spending is not that large as a component of GDP (gross domestic product), but it is important because it affects other economic activities.” – Rappler.com, with a report from Agence France-Presse