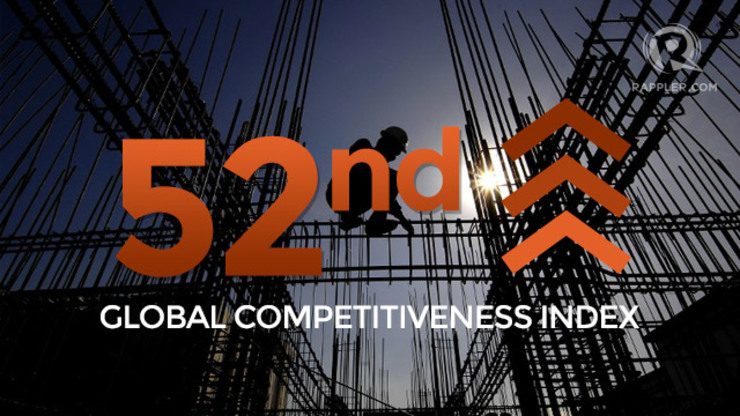 Facebook Twitter Copy URL
Copied
(2nd UPDATE) Since 2010, the Philippines has gained 33 places in the World Economic Forum Global Competitiveness Report – the biggest improvement among all economies in the survey 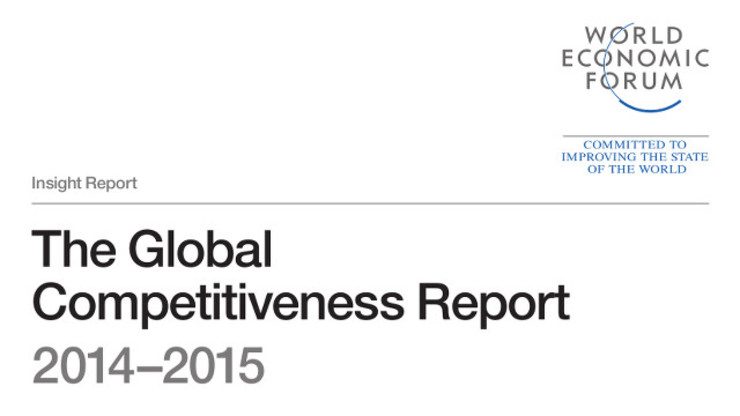 “The results suggest that the reforms of the past 4 years have bolstered the country’s economic fundamentals,” the WEF said in the report. (READ: PH economy picks up steam in 2nd quarter).

The Philippines placed 52nd out of 144 economies in the prestigious rankings, versus 59th in 2013. Since 2010, when the Aquino administration took office, the country has gained 33 places – the largest over the period among all countries studied.

With businesses as respondents, the survey grades countries based on 12 categories or “pillars.”

For the Philippines, the WEF said, “The trends across most of the 12 pillars are positive, and in some cases, truly remarkable.”

The Philippines continued to lag behind its “ASEAN 5” peers in competitiveness, but it is “slowly” closing the gap, according to the WEF.

The WEF reported that the ASEAN 5, along with Japan and China, all improved their rankings this year.

Elsewhere in the world, the US climbed places for the second consecutive year on the back of better institutional framework and innovation. In Europe, countries severely hit by the economic crisis such as Spain, Portugal and Greece made strides.

The Philippines posted the highest gain in “institutions,” where it rose to 67th place from 79th in 2013. The country has leapfrogged some 50 places in this category since 2010.

“There are signs that the efforts made against corruption have started bearing fruit,” said the WEF.

It added, “the recent success of the government in tackling some of the most pressing structural issues provides evidence that bold reforms can yield positive results relatively quickly.”

A similar trend was observed in terms of government efficiency (69th) and the protection of property rights (63rd).

The Philippines has also made significant strides in technological adoption (69th) as it is one of the best digitally connected developing Asian nations, close behind Malaysia (60th) and Thailand (65th).

The same cannot be said of infrastructure, however, which remains “poor.”

The Philippines ranked 91st in terms of infrastructure – in particular, 108th in airports and 101st in seaports.

The country also ranked a mediocre 91st in the labor market category, no thanks to rigidities and inefficiencies. “Almost no progress” has been made in this pillar since 2010, the WEF said.

Finally, security remains to be an issue (89th), particularly in terms of costs that threat of terrorism imposes on businesses (110th).

Here’s a list of the most problematic factors for doing business in the Philippines: Malacañang said the latest WEF report is further proof that the Philippines is “more open for business” and shows that reforms over the past 4 years have “bolstered our economic growth.”

“This latest measurement of the country’s competitiveness is another demonstration that the Philippines is indeed more open for business than ever before: in our region, for example, the Philippines is considered one of the brightest spots, and is the second fastest growing economy among major Asian countries for the second quarter, tied with Malaysia,” said Presidential Spokesperson Edwin Lacierda.

Lacierda added, “This has been made possible by the Filipino people who, imbued with a positive, can-do attitude, are going from strength to strength in terms of governance and the economy.”

Malacañang especially thanked the National Competitiveness Council under Guillermo Luz for its important role “in challenging all sectors, public and private, to work together to achieve dynamism, inclusivity, and sustainability in our economic growth.”

In another statement, Palace Communications Secretary Herminio Coloma Jr said that the country’s “achievement” in the WEF competitiveness ranking “indicates that the Philippines is well-poised to attain its objective of being in the top third (or rank 42) by 2016.”

Coloma also said that the government is addressing infrastructure development, “with the launching of major projects that are being implemented by using the public-private partnerships mode.”

Finance Secretary Cesar Purisima said the WEF report “is a clear indication that to this day… the platform of ‘good governance is good economics’ remains to be at the cornerstone of the growing competitiveness and development of the Philippines.”

“This encouraging development… augurs well for sustained positive business sentiment in the Philippines.”

For his part, Budget Secretary Florencio “Butch” Abad promised that his agency would pursue more budgetary reforms in line with the administration’s good governance and economic reform agenda.

“The transformation of our budget processes towards increased transparency, accountability, and openness are central to the economic gains we’ve been making in the last four years. We will continue to hew these reforms very closely with the President’s governance and development priorities.” – Rappler.com