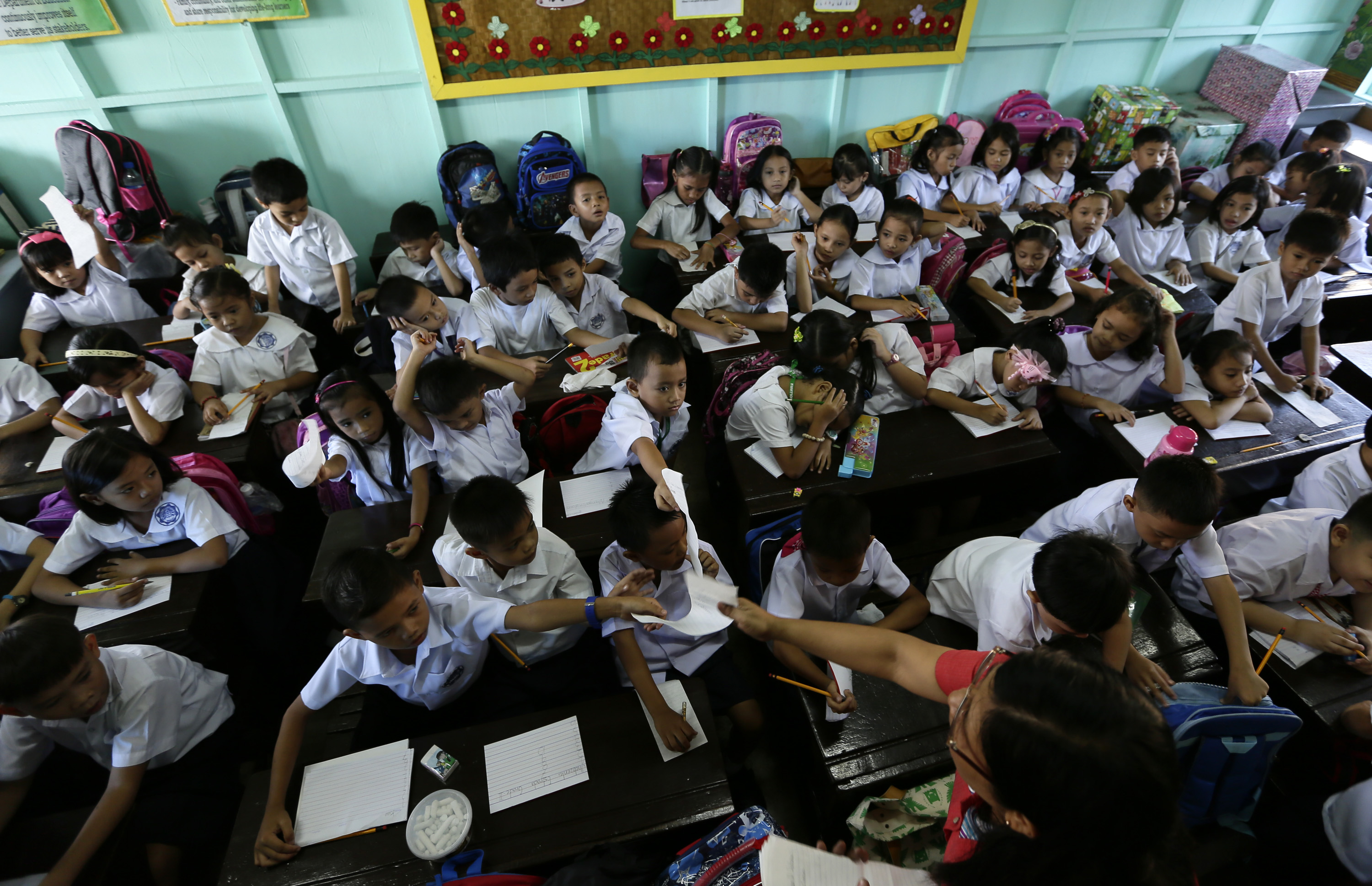 PAMPANGA, Philippines – While hailed as one of Asia’s fastest growing economies, the Philippines’ state of education continues to lag behind and is hindering the country’s goal of inclusive growth.
“Our education needs more discipline and depth, so our frame of thought would be fixed,” said Foreign Affairs Undersecretary Laura Del Rosario, chair of the Asia-Pacific Economic Cooperation Senior Officials’ Meeting (SOM), told reporters on Saturday, February 7.
Following a series of closed-door discussions, Del Rosario was asked about the greatest barrier to the Philippines’ bid for  achieving inclusive growth.
Growth should be fair, balanced, inclusive, innovative, and secured, according to APEC’s terms and standards.
In the case of the Philippines – chair and host of APEC 2015 – its education lacks innovation.
“In other countries, they integrate science in education, because they know that will push to develop their thinking skills and their ability to form conclusions,” said Del Rosario.
In 2014, the World Bank said the Philippines needs to spend an additional 5% of the gross domestic product (GDP) on education and health to increase labor productivity and competitiveness of Filipino workers.
As a boost, the Philippine government has programmed to spend P367.1 billion ($8.31 billion) on education this year, making the Department of Education as the biggest recipient of the 2015 national budget.

Del Rosario is also looking at how other member economies innovate their education system.

She cited the Republic of Korea, among others, as having exemplary methods in educating their citizens, when it merged its education and science and technology cabinet-level ministries.

“That’s why when you look at the interventions done by Korea and Japan, it’s always tied to a discipline dependent on science,” Del Rosario pointed out.

The reason: their education systems were geared for students to possess cognitive and communication skills, leadership, emotional intelligence, teamwork, entrepreneurship, global citizenship, and problem-solving, according to a Forbes analysis in 2014.

“Half of the economic growth in developed countries in the last decade came from improved skills, highlighting the importance of skill development to growing an economy,” the report said, citing Pearson’s interview with 7 international experts on education.

Developing human capital across the region is among the 4 key priorities of APEC 2015.

Other priorities are enhancing the regional economic integration agenda, fostering small and medium enterprises (SMEs) in regional and global markets, and building sustainable and resilient communities.

At the APEC-SOM send-off, Del Rosario said human capital development was among the concerns of the senior officials who are looking at poverty rates and the inequality of income.

Oxfam International had said that by 2016, the global scale of inequality will stagger, with the richest 1% to own more than everyone else.

“We want to expand the pie or the share,” Del Rosario said.

The APEC Scholarship and Internship Initiative targets one million Asia Pacific university-level students in 5 years, according to Del Rosario.

The portal was endorsed by APEC leaders in Beijing in November 2014.

A well-educated, well-trained, and well-connected workforce is critical to ensuring long-term growth and prosperity on both sides of the Pacific, US Secretary of State John F. Kerry, who heads the initiative, said in a statement.

“Together, APEC and the private sector are opening the gates of opportunity to provide more of the region’s 3 billion people the knowledge, skills, and experience they need to thrive in a 21st century marketplace,” Kerry said.