Facebook Twitter Copy URL
Copied
Investors are also looking in general for a 'fresh face, not an old face,' says an analyst

MANILA, Philippines – Foreign investors are increasingly worried about whether the next administration would continue the economic policies instituted by the administration of President Benigno Aquino III.

“One question that investors increasingly ask us about the Philippines is ‘what about next year?’” referring to the 2016 presidential elections, said Frederic Neumann, co-head of the Hongkong and Shanghai Banking Corporation (HSBC) Asian Economic Research.

Neumann told a forum Wednesday, February 25, that while the Philippines is well-positioned to continue its economic gains for the short-term, the transition to the new administration is a source of concern and how such would impact economic reforms that are already in place.

Investment is generally abundant at the beginning of a term, but generally slows down during the final period of an administration, explained Neumann, stressing that this is true not only in the Philippines but with other countries as well.

However, political transitions in the Philippines have been more pronounced in the last two decades. While this perception is gradually fading, it is still present.

“The Philippines is a victim of its own past,” Neumann remarked.

In particular, investors are most cautious about the energy sector and the infrastructure projects under the public-private partnership (PPP) scheme, as these require massive funds and profit is often being hinged on government policies, Neumann cited.

“If you were to invest a billion dollars in a project, you would probably wait until you have more clarity on the policy front before going ahead with it,” he said.

Neumann though praised the Aquino administration, saying that 5 years ago, one could probably not have hoped for a better economic outcome.

Aquino is a “great consolidator” and probably what the country needed when elected.

Neumann added that the next president would ideally be “all about action” – a dealmaker who would push an increase of investment in infrastructure.

When pressed about which of the potential successors would best live up to that, Neumann said that investors are generally looking for a “fresh face, not an old face.” 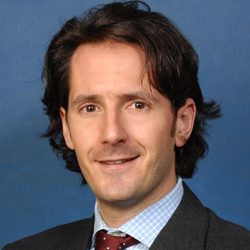 The Philippines is one of the consistent performers in the Association of Southeast Asian Nations (ASEAN) for GDP growth.

The Philippines also has an unusually strong external position relative to its ASEAN neighbors. The country’s external debt stands at only about 20% of its GDP, the lowest in the region.

The country’s current accounts surplus is another bright spot standing at an estimated 4.4% of the GDP, the highest in ASEAN, mainly due to the steady tide of remittances from abroad.

Inflation is also not seen as a worry, with a forecasted 2.6 % increase year-on-year in 2015, leaving the Bangko Sentral ng Pilipinas plenty of breathing space.

HSBC also predicts the current 4% interest rate to remain unchanged at this year.

The Philippines will be one of the biggest beneficiaries of the low oil price, with oil imports accounting for as high as 3.75% of GDP.

Such is expected to boost consumption, which is the biggest driverof the economy at present Neumann noted.

He warned however that the country has to acknowledge that it is currently “free-riding a bit” on global economic conditions, specifically low global interest rates and oil prices.

A shift in policy toward attracting more investment from being predominantly consumption driven would further insulate the country from global economic fluctuations and make growth more sustainable in the long-term, Neumann said. – Rappler.com