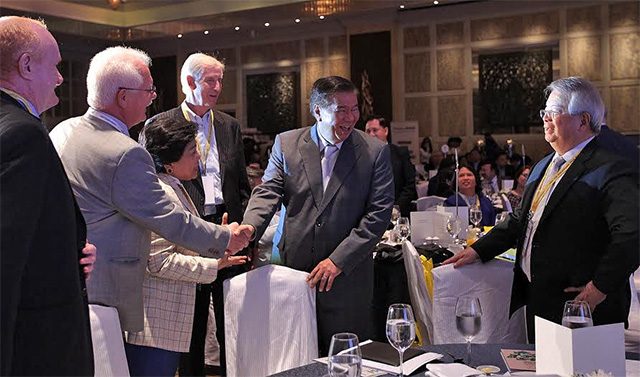 Facebook Twitter Copy URL
Copied
With the Aquino administration on its homestretch, a long-term strategy that draws more investment to diversify the economy is needed, the Joint Foreign Chambers of the Philippines says at the 4th Arangkada Forum

MANILA, Philippines – With only 16 months to go until it relinquishes power, the Aquino administration has to “institutionalize” economic reforms that would ensure that the gains it had fostered, so far, would not be reversed, local and foreign business groups agreed on Tuesday, March 3.

Now that the Aquino administration is on its homestretch, a long-term strategy that encourages more investment to diversify the economy is needed to achieve long-term, inclusive growth, the Joint Foreign Chambers (JFC) said at the 4th Arangkada Forum.

“The Aquino administration is now entering the homestretch of its term. There are now only 16 months remaining to institutionalize the much-needed reforms that will ensure that the considerable gains of the last 4-and-a-half years will not be reversed,” Makati Business Club (MBC) Chairman Ramon R. Del Rosario Jr said at the forum.

During the forum, JFC leaders stressed the importance of investment to sustain the current economic momentum.

JFC stated that the Philippines has done relatively well in attracting investments in 2014, but this was primarily because it started from such a low base.

“We in the chamber feel that it should be around 10% instead of about 6%.  The Philippines is not getting its share of foreign direct investment, particularly among ASEAN countries such as Vietnam,” said Ian Porter, president of the Australian and New Zealand Chamber of Commerce.

The JFC presidents added that restrictions on foreign investments bar the maximum flow of investments. The Constitution restricts foreigners to 40%-ownership of a corporation. The restrictions on mining are also hurting the economy, they said.

Porter said the government should prioritize amending the economic provisions of the Constitution as this is “the absolute key” to attracting the investments required to alleviate poverty.

JFC is not only speaking for itself, but every business organization in the Philippines shares their sentiments, Porter added.

Despite the relative lack of investment, JFC acknowledged that the economy is doing well, driven by business process outsourcing (BPO) and consumption.

Porter warned though that there is a risk in not diversifying, as some offerings and services of the country’s BPO industry will increasingly decline because of technological advancements.

Porter also added that opening up the mining sector would be an easy way to mitigate this by adding potentially significant revenue to the country’s economy.

“Right now there is only 0.7% generated by mining. It could easily be 5 times than that,” he said.

JFC pointed out that 462 or 74% of the recommendations it announced at 2014’s Arangkada event are being addressed.

The Customs Modernization and Tariff Act (CMTA) which would comply with the revised Kyoto Convention is due to be enacted this year. But it still has a long way to go, Canadian Chamber of Commerce President Julian Payne said.

The CMTA is set to be approved this year, said Senate President Franklin Drilon who addressed the forum.

Payne noted that it has been 20-plus years that the BOT law has been amended thus JFC supports the public-private partnership Senate bill filed by Senator Juan Edgardo Angara on March 3. The measure aims to provide the most appropriate framework to mobilize the private sector to finance, design, construct, operate, and maintain infrastructure projects and services.

In his speech at the forum, Drilon also gave an update on the status of measures supporting businesses.

Drilon shared that in preparation for the ASEAN Economic Community this year, Congress passed in 2014 the measure allowing the full entry of foreign banks in the country.

The Go Negosyo Act also aims to improve the ease of doing business in the country. The Senate also enacted the Fair Competition Act and it will also pass the Cabotage Law, Drilon said.

The creation of the Philippine Trade Representative Office and Department of Information and Communications Technology is also among the Senate’s top agenda, while the Bangko Sentral ng Pilipinas (BSP) Charter is also set to be amended, he said.

Drilon also assured the JFC that their concerns over the Tax Incentives Monitoring and Transparency Act (TIMTA) are unfounded.

The law will not touch incentives for foreign investors, as it is for transparency – for the public to know the tax expenditures to provide tax incentives to the business sector, Drilon assured.

He also reiterated that the government is working on the rationalization of fiscal incentives bill and assured the foreign business community that it will be in favor of both the public and the private sector, the foreign chambers in particular.

“Let me assure that the Congress is a listening Congress which always has the national interest as our agenda,” Drilon said. – Chris Schnabel / Rappler.com