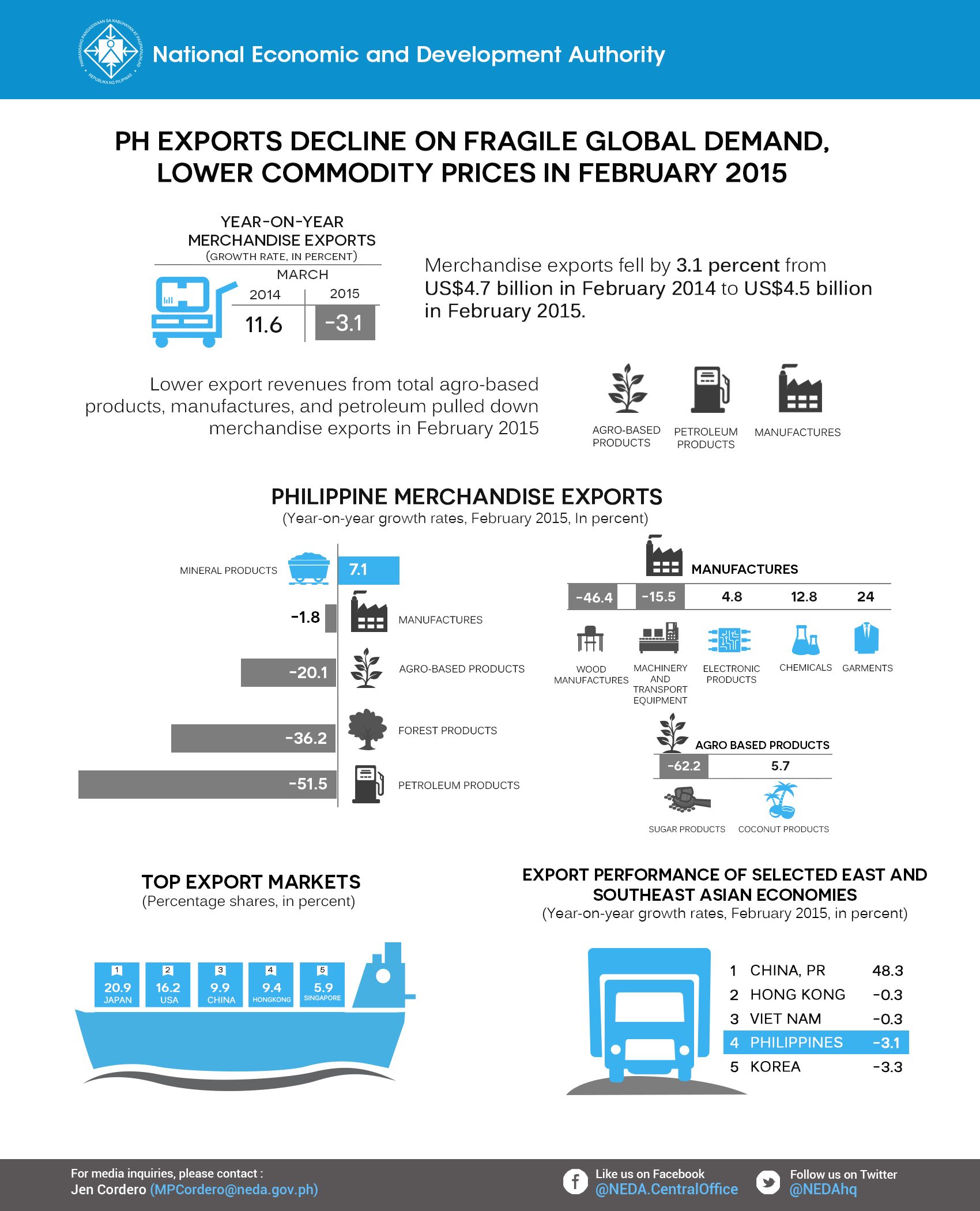 This is the third straight month that merchandise exports are recording contractions. Back-to-back declines were last seen in late 2011, analysts observed.

For February this year, total revenue from Philippine exports reached $4.5 billion, down from $4.7 billion in the same period in 2014, the Philippine Statistics Authority (PSA) reported Wednesday.

Economic Planning Secretary Arsenio Balisacan said that it is not only the Philippines experiencing a negative export performance for February 2015, as majority of the major economies in East Asia and Southeast Asia also registered low export growth for the period.

Only the People’s Republic of China is in the positive, export performance-wise.

“This partly mirrors the still fragile global economy, which is particularly reflected in the country’s weak turnout of merchandise exports on the back of lower demand from the country’s major trade partners, Japan and China,” Balisacan said.

Particularly, agro-based products and manufactures are major commodity items that contributed to lower export outturn due to significant declines in shipments to Japan and China.

The recorded contractions in these manufactured commodities slightly outweighed the year-on-year gains in the value of electronic products, most notably of semiconductors, garments, and chemicals, Balisacan said.

Electronic products exports grew by 4.8% in February 2015 to $1.97 billion from $1.88 billion in the same period last year, the Semiconductor and Electronics Industries in the Philippines Foundation, Incorporated (SEIPI) reported Wednesday.

Also lower export volume and the plunging global prices of crude oil continue to drag revenues from petroleum products, which contracted by 51.5% during the period.

Japan remained as the top destination of Philippine-made goods accounting for 20.9% of total revenues from merchandise exports during the period.

The United States continues to be in the second spot with 16.2% share, and China with 9.9%.

Balisacan said that the February exports contraction was noted, but the forward estimates of manufacturing activity for both Japan and China suggests another slowdown for the country’s merchandise exports performance in March.

“Now is the high time to be vigilant,” he said.

The government will also benefit from intensifying its efforts in expanding its market base for agro-based products.

Further improvements in infrastructure and logistics should also continue to support the export manufacturing sector, along with addressing the power supply concern for the summer months, he added. – Rappler.com