Remittances increase to $2.1B in February 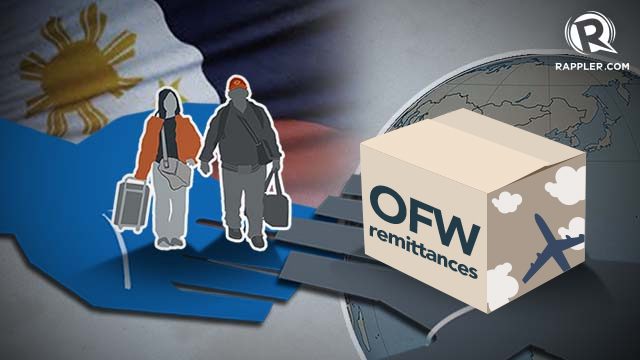 The latest record only gained 0.2% from January’s $2 billion remittances.

From January to February 2015, personal remittances from land-based workers with work contracts of one year or more and migrants’ transfers totaled $3.1 billion.

Sea-based and land-based workers with work contracts of less than one year aggregated $1 billion.

Cash remittances from overseas Filipinos coursed through banks hit $1.9 billion in February 2015, higher by 4.2% than the level posted a year ago.

Thus cash remittances for the first two months of 2015 reached $3.7 billion, representing a 2.4% increase relative to the year-ago level.

In particular, cash remittances from land-based and sea-based workers rose to $2.8 billion and $0.9 billion, respectively.

BSP said the slowdown in growth in recent months could be due to base effect as remittances in 2014 were relatively high given higher transfers from overseas Filipinos that were intended for the rehabilitation and rebuilding efforts in Eastern Visayas due to the damage caused by super typhoon Yolanda.

Of the approved job orders, 26.5% were processed mainly for service, production, and professional, technical, and related workers in Saudi Arabia, Kuwait, Taiwan, Qatar, and the United Arab Emirates.

BSP also acknowledged the continuing efforts of banks and non-bank remittance service providers to expand their international and domestic market coverage through tie-ups abroad, as well as introducing innovations in their remittance products that buoy the flow of remittances.

Remittances from Asia contracted on a year-on-year basis for 3 consecutive months, and the global outlook is not encouraging either, the World Bank Migration and Development Brief dated April 13 showed.

The Philippines recorded a sharp slowdown of remittances in January 2015. An expansion of remittances from the US was offset by sharp dips from other key source countries including the Euro Area, Canada, and Singapore.

World Bank noted the decline may be attributable to economic slowdowns in those source countries, depreciation of every major currency against the US dollar, and the disruption in money transfer services offered by those money transfer organizations which bank accounts have been closed by commercial banks in compliance with anti-money laundering and similar regulations.

A 12.7% decline in Europe and Central Asia and slowdown in East Asia and the Pacific, Middle East, North Africa, and Sub-Saharan Africa would contribute to the decline.

“Weak economic growth in Europe, deterioration of the Russian economy, and the depreciation of the euro and ruble” are seen to contribute to the projected slowdown of remittances growth this year, World Bank said.

The positive impact on flows of a robust recovery in the US will be partially offset by continued weakness in Europe; the impact of lower oil prices on the Russian economy; the strengthening of the US dollar; and tighter immigration controls in many source countries for remittances.

The slowdown will particularly impact the top 5 remittance recipient countries: India, China, the Philippines, Mexico, and Nigeria from where migrants go chiefly to the US, Saudi Arabia, Germany, Russia and the United Arab Emirates, World Bank said.

There is a silver lining though as World Bank said remittance flows though are expected to recover in 2016 to reach $479 billion by 2017, in line with the more positive global economic outlook.

“The 2015 remittance growth rates are the slowest since the global financial crisis in 2008 and 2009. Nonetheless, the number of international migrants is expected to exceed 250 million in 2015, and their savings and remittances are expected to continue to grow,” the brief stated.

World Bank also estimated that as much as $100 billion in migrant savings could be raised annually by developing countries through reducing remittance costs and migrant recruitment costs, including mobilizing diaspora savings and philanthropic contributions from migrants. – Rappler.com