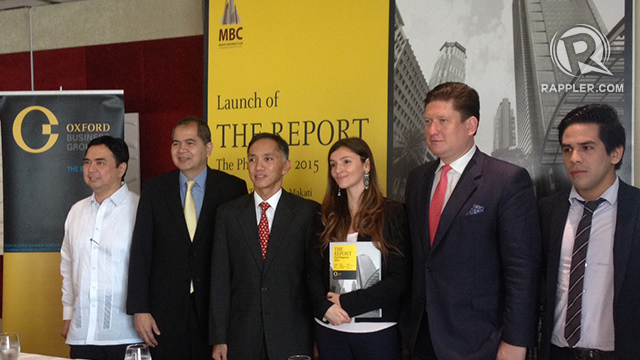 MANILA, Philippines – Global consulting firm The Oxford Business Group (OBG) launched the latest version of a report on the country from the investor’s perspective, highlighting the Philippines’ growth story and its improving stature in the global arena.

The report entitled, “The Report: the Philippines 2015”, unveiled in Makati City on May 7, was produced with the help of the Makati Business Club and the Philippine Chamber of Commerce. It features detailed coverage of specific industries, most of which are benefiting from the strong economy.

“We are convinced that the Philippines is now one of the hottest and most attractive investment destinations not just in the region but globally. There has been a huge shift in investor sentiment away from traditional emerging markets such as the BRICs, China and India, now it’s all about Southeast Asia,” said Paulius Kuncinas, OBG Managing Editor for Asia in his speech at the launch.

The Philippine growth story is exciting, he said, because the growth is driven by domestic consumption anchored on high local demand.

This is a more sustainable model compared to the export-driven growth of other Asian “Tiger economies”, he said.

OBG believes that local demand will, in time, lead to the growth of local manufacturing to facilitate import-export substitution.

Kuncinas remarked that the Philippines is the absolute leader of exporting services in Southeast Asia driven by seafaring, hospitality, medical services, and is now emerging in engineering.

“We also noted that the macro story looks enduring, gone are the days of irresponsible spending,” he said.

He explained that spending and fiscal numbers look solid with low deficits; debt to GDP ratio stands at an acceptable 37.3%; and there’s also been a lot of interest in institutional investors in bonds, following credit upgrades.

The most remarkable aspect of the story, he added, was the emergence of new sectors led by the BPO industry, which, he noted has moved on to more value-added services. It can claim global leadership along with India.

OBG are believers in ASEAN integration and think that with Malaysia chairing ASEAN this year, and the Philippines chairing the APEC council, there is a great opportunity for the region to create synergies.

“We think the idea of ASEAN banks and other financial structures would be highly beneficial because if you look at the cost of moving money around the region it’s well behind other integrated regions,” Kuncinas said.

It’s one of the reasons companies, especially SMEs, find it difficult to go across the border – not because of the lack of opportunity or good products – but because the cost of financial compliance of moving money around the region is too high.

He added that OBG estimates the cost of country tariff is traditionally 5%, while the cost of compliance is 30%. This means harmonization has to be one of the big issues moving forward.

There is a growing consensus around the region on the need to launch infrastructure bonds, as the main issue ASEAN countries face in infrastructure is access to long-term funding needed to build major projects, he said.

Getting 10-15-year loans at reasonable rates is hard because of the risk premium. The best way to solve it is to actually borrow not in the US or Japan, but here in the ASEAN region.

The ASEAN region has excess savings and loads of liquidity and only needs the regional financial structures in place to actually tap into that liquidity, Kucinas explained.

It would also help solve one of the Philippines’ greatest problems which is infrastructure.

“As a fragmented country, the cost of moving goods is high and sometimes it’s easier to import something from Singapore than moving goods from one island to another,” he said. – Rappler.com