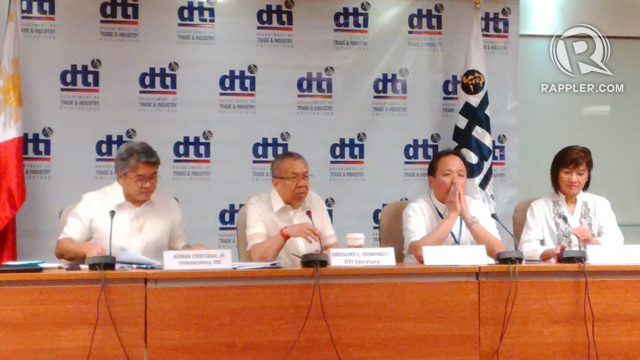 The government may sign accords with the 3 countries within “at least two years.” This would allow the Philippines to create a market conducive for more micro, small and medium enterprises (MSMEs), officials of Department of Trade and Industry (DTI) said in a media briefing on Wednesday, May 27.

“We feel that the past 2 1/2 years of preparing ourselves in engaging more FTAs (free trade agreements) are already bearing fruit,” Trade Undersecretary Adrian Cristobal said.

During the Asia-Pacific Economic Cooperation (APEC) Ministers Responsible for Trade meeting in Boracay, Aklan, last May 23 to May 24, Cristobal said the Philippine government launched exploratory discussions with the delegates of Mexico, Chile and Canada for a possible bilateral agreement.

“We had productive talk with Mexico. Its delegates said they are ready to explore possibilities for a preferential trade agreement. In the meantime, we’re also reviewing Investment Protection signed in 1990. We’re in the intention to upgrade that. This is to strengthen our bilateral trade and economic relations,” Cristobal explained.

The DTI official also said the Philippines and Chile governments plan to enter into a bilateral accord, which was initiated by Chile early on.

DTI Secretary Gregory Domingo said that Chile reiterated its plans before for a bilateral FTA with the Philippines “during a courtesy call of its ambassador to the Philippines Roberto Lorca.”

“There was a strong interest in both sides to enter discussions for comprehensive trade agreement. Both Chile and the Philippines want to explore on the possibility of the benefits of such agreement,” Cristobal said.

Other than Mexico and Chile, Cristobal said his office has “launched exploratory talks with Canada brought by the recent visit of President [Benigno] Aquino [III] in Ottawa, Canada last May 8.”

The Philippines and Canada also last May 8 agreed to exhaust means in upgrading the existing 1996 Foreign Investment Promotion and Protection Agreement (FIPA), and developing projects and activities under the Canadian Trade and Development Facility to offer technical services to MSMEs.

“All the possible trade agreements are all in the exploratory stage. After this, technical consultations and studies will follow. Those are still down the road. They somehow take a long time. Usually, forging of a bilateral agreement takes two years or more,” Cristobal said.

In 2006, the Philippines signed its first bilateral trade treaty, which is with Japan.

“The government is now ready to explore more bilateral agreements with other countries, besides Japan. It is very timely with the ASEAN (Association of the Southeast Asian Nations) integration this year,” the DTI official said. – Rappler.com