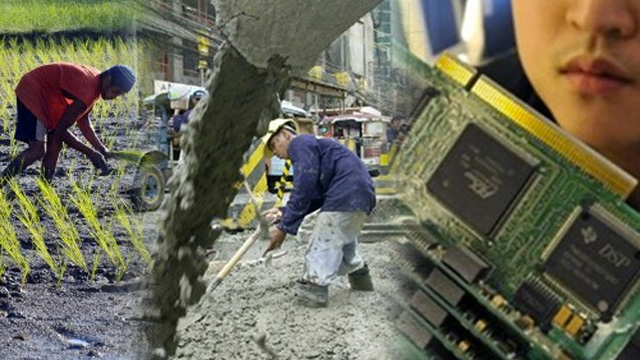 MANILA, Philippines (UPDATED) – Philippine economic growth in the first quarter of 2015 decelerated to a 3-year low of 5.2% year-on-year, prompting economists and business leaders to warn that the country might struggle to realize its full-year growth target of 7% to 8%.

State statisticians announced Thursday, May 28, that the economy’s growth last quarter is slower than the 5.6% gross domestic product (GDP) growth in the same period in 2014. It was down from 6.6% in the 4th quarter last year, the slowest pace since the 3.8% growth recorded in the last quarter of 2011.

“We were hopeful that the government will increase its spending, but maybe the problem lies with the disbursement. There could be delays in the budget release, as the government is now extra careful because of the controversial DAP (Disbursement Acceleration Program) incident,” Ang said.

In July 2014, the Supreme Court ruled that certain schemes under the DAP were unconstitutional, about 3 years after the spending program was implemented by Malacañang.

Weak public spending, along with the decline in exports, was one of the root problems of the growth slowdown last quarter. Data from the Department of Finance showed that government spending of P504 billion ($1.2 billion) during last quarter was 13% below target, even if it grew by 4% from the same period last year.

Meanwhile, export growth decelerated to 2.1% in March, from 12.1% in the same month last year, according to the latest data from the National Statistics Office. 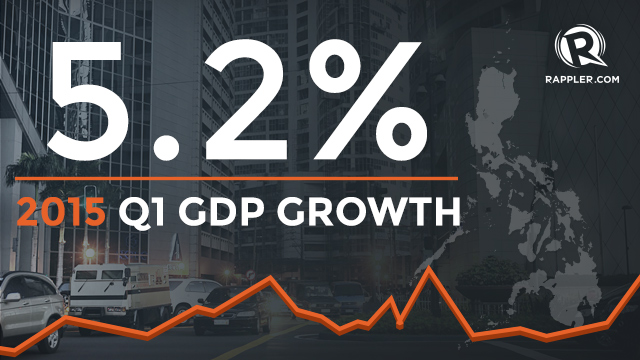 “I was expecting over 6% [GDP growth] in the first quarter of 2015. Drivers should be public investments, exports, and usual consumption. Agriculture sector growth is also slow. This makes it hard to reach 8% GDP growth for the year,” Rolando Dy, dean of the School of Management of the University of Asia and the Pacific (UA&P), said in a mobile phone reply.

“Perhaps, 7% is possible if spending accelerates in the next quarters,” Dy added.

For Bank of the Philippine Islands economist Emilio Neri, first quarter’s GDP growth “was well below my forecast of 6.7% as the slowdown was seen [in] our stalwart services sector.”

“Services usually account for the bulk of Philippine growth and its contribution, although still solid, slipped to 3.13% points to the overall growth,” he added.

The slowdown last quarter, according to Neri, can be attributed to the weak contribution of the following subsectors: “financial intermediation; real estate, renting and business activities (RERBA); and retail trade.”

Banks and non-banking financial institutions had grown only by 3.9% during last quarter, as compared to more than 7% in the same period last year. RERBA decelerated to 6.4% in the first quarter of the year, compared to 10.2% in 2014, due to the slowdown of renting businesses.

Renting business – which had grown a stellar 20% during the first quarter of 2014 – slowed to only a 5% gain last quarter.

“Other notable reasons for the slower growth was the 24% contraction in public construction, coupled with only a 0.2% growth in public administration and defense,” Neri added.

‘Next months will be better’

Still, some economists were optimistic on the economy’s prospects for the second quarter, seeing signs of increase in public spending and better exports growth.

“From the looks of it, I think there will be an uptick in public expenditures in the second quarter and there could also be improvements in exports, Ateneo EagleWatch economist Fernando Aldaba said in a phone interview.

“On production side, agriculture is very low and it might not improve in the next quarter as the impact of El Niño will be felt strongly. This, however, could be pulled by the manufacturing sector in the second quarter,” Aldaba added.

Aldaba’s EagleWatch colleague Ang said: “One thing I have observed in the first quarter GDP is that the manufacturing growth is mainly driven by semiconductors; so, exports could improve in the second quarter. There are those goods that were not exported during last quarter. It could carry over in the second quarter so there could be better months ahead.”

The printing business under the manufacturing sector would also be strong as campaigning for the upcoming May 2016 elections gears further toward the end of the year, Neri said.

“We’ve already seen some paid advertisements by possible candidates.  With no clear cut winner, or candidates for that matter, expect a lot of economic activity in the coming months to boost the overall [printing business],” Neri said. 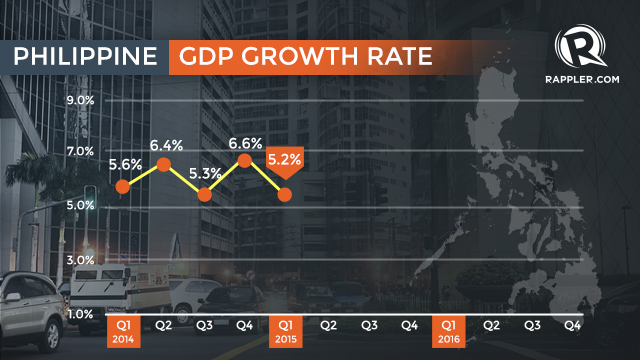 ‘Not enough to hit the target’

Former finance secretary Roberto de Ocampo said in a phone interview, “I think the Philippine economic growth will not be more than 7% for the whole year.”

“Public spending was lower than programmed and exports growth was weak during last quarter. Although there is an expected higher government spending because of increase in implementation of infrastructure due to coming elections, it won’t still be enough to hit government target,” de Ocampo added.

“Although we still have to crunch estimates, the government will probably not hit its target of 7% to 8%,” Ateneo EagleWatch’s Aldaba said.

“Our forecast is around 6.7%. Assuming there is a 7% average growth rate in the next 3 quarters, I still don’t think it will be enough to hit the target,” Aldaba said.

For Ateneo EagleWatch, Ang said his office projects “6.5% GDP growth for the whole year, which is below the government’s target of 7% to 8%.”

“The second quarter and the rest of the year will be better. It will be driven by both government and election-related spending, also, exports are expected to improve and help raise gap,” UA&P senior economist Cid Terosa said in an email response.

Following the letdown in its first quarter GDP growth, the Philippines, once Southeast Asia’s fastest-growing economy, now also lags behind Vietnam and Malaysia.

“The GDP growth last quarter drops the Philippines to third fastest-growing economy in Southeast Asia, behind Vietnam and Malaysia, and puts us fourth best in Asia,” Neri said.

“If for anything, it exposes what many analysts have been harping at all along: government spending has been anemic and somewhere down the line, we will be paying for it. It appears, that time is finally here,” he added.

Neri said the government can no longer rely solely on the services sector and private consumption to bolster the economy. “It is now time to grow other sectors.”

For Ang, he said: “It’s time for the country to diversify, and attract growth in other sectors like manufacturing and electronics.”

De Ocampo, who is now the chairman of the Philippine Veterans Bank, said, “The solutions to grow Philippine economy faster are infrastructure and urban decongestion.”

“The government should invest more in infrastructure, plus there should be urban decongestion. Connect major cities to budding ones like Pampanga through railways, subways and connector roads. What I don’t get is it has been 15 years since MRT-7 (Metro Rail Transit Line 7) was brought up and until now it has not been constructed yet,” the former finance secretary said.

The construction of the MRT-7, a 22.8-kilometer train line with 14 stations, has been delayed for several years because of issues like, drawbacks in securing a performance undertaking from the Department of Finance as well as the absence of a final decision regarding where the common station for the three major elevated railways in Metro Manila will be located.

“These are not long-term solutions. Infrastructure is a need the government should prioritize years ahead, or else the growth of the economy will suffer,” De Ocampo said.

If the government does not act now, continued slowdown in growth “will weaken the perception of dynamic Philippine economy,” AmCham senior adviser John Forbes said.

“Inadequate public spending, congestion issues, and outdated infrastructure are challenges that must be addressed to maintain investor confidence and to raise GDP growth rate above 7%,” Forbes added.

Meanwhile, ECCP Executive Director Henry Schumacher said: “Infrastructure spending needs to be accelerated and limitations on the involvement of foreign construction investors should be removed now or else it could lower investor confidence.” – Rappler.com