What consumers need to know about the PH Competition Act Picture this: You are at a supermarket, and you find that prices of garlic have more than doubled almost overnight.

Garlic captured the attention of consumers and government officials public when its prices hit a high of P287 ($6.37) per kilogram in June 2014 – a 74% increase over a one-year period, and a 100% increase over average prices.

The price spike prompted President Benigno S. Aquino III to order an investigation. The findings showed that due to loopholes in the Bureau of Plant Industry (BPI) system of issuing plant quarantine clearances, along with collusion, a cartel was able to control 75% of all garlic imports in the country.

The people allegedly behind the garlic cartel were eventually charged with graft and corruption, but not for engaging in monopolistic behavior. This is because the Philippines has no comprehensive competition law.

“There is at present no specific law prohibiting this. If there are no rules against something, then what they’re doing isn’t illegal, even though it may be everywhere else in the world,” Senator Paolo Benigno “Bam” Aquino IV said in an interview with Rappler. (WATCH: Rappler Talk: Senator Bam Aquino on the Fair Competition Bill)

Under Article 186 of the Revised Penal Code, these traders would probably have smuggling cases filed against them.

“Article 186 outlaws monopolies and combinations of trade but no one has ever been convicted of violating the 80-year-old law,” Aquino said.

Aquino is the principal author of the 2014 Philippine Competition Act, which seeks to prevent this type of unfair business practice.

The senator said that the Philippine Competition Act, ratified by Congress on June 11, is “historic and game-changing for our economy; it’s the first time we’ve ever had a competition law.” 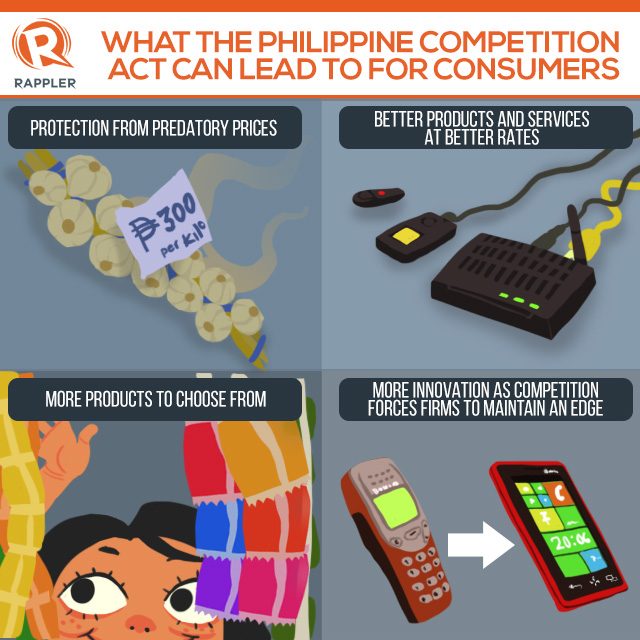 The act seeks to level the playing field by prohibiting anti-competitive agreements, abuses of dominant positions, and mergers and acquisitions that limit, prevent, and restrict competition.

The end goal is to provide benefits to consumers through more choices and lower prices which, Aquino said, market competition provides.

Aquino cited the airline industry as an example. In the 1990s, flights to Davao  cost more than P10,000 ($221.28). But when Cebu Pacific and other low-cost airlines entered the market, the air fare dropped dramatically despite the spike in fuel prices during the period.

The senator referred to mobile phones as another example. “Nokia was very dominant a decade ago. Imagine if they had abused their position and prevented other entries, then we would not have the tremendous choice and budget-friendly options we have today,” Aquino said.

The Philippine Competition Act now only needs a signature from the senator’s first cousin, President Aquino, to become a law, after spending decades languishing in the legislative mill. Various groups have been trying to pass a comprehensive competition law since it was first filed in the 8th Congress under the first Aquino administration, said former socioeconomic planning secretary Dr Cielito Habito, who provided extensive technical assistance to the current act.

“The opponents of the law, big businesses, were always very successful in stopping [it] and have done so for decades until now,” explained Habito.

Habito, who served as National Economic and Development Authority chief during the Ramos administration, added that it would be easy to identify who the opponents may be.

Senate President Franklin Drilon and Speaker Feliciano Belmonte Jr were crucial in mustering the political will to shepherd both versions of the bill, Habito said.

“In fact, I’m told that Speaker Belmonte told his congressmen that if there’s only one law that this 16th Congress will pass, he wanted it to be the competition bill; that’s how much of a priority it was for him,” Habito shared.

“It’s going to be an embarrassment for us to be the only one of the original 5 ASEAN founding members yet without a comprehensive competition law,” he said.

Habito said the congressmen were aware of this, which “led to some political will to finally get this through.” The telecommunications and energy industries may feel the initial pressure once the Philippine Competition Act is signed into law, Habito said.

He added there will be a lot of work to be done to further refine the rules applying to the telecommunications industry, given its status as a duopoly.

Aquino echoed this. “The commission will most probably look at the telecommunications industry and analyze why there are only two players in it. That’s not to say they are doing anything wrong. But most economists say that you need at least 3 players to have an active market.”

The Philippine Long Distance Telephone Company and Globe Telecom, Incorporated, through their aggregate brands, account for 99.8% of the revenue market share, according to Globe’s own figures.

For Habito, the situation in the telecommunications industry is why the Philippine Competition Act is so important.

“Everybody is lamenting about how we have the slowest Internet and at very high rates, and to the most extent, that is because of the lack of competition,” he said.

“That’s the kind of situation where we would welcome a new player coming in…. The competition law will make that a lot more likely,” Habito said. (To be continued) – Rappler.com