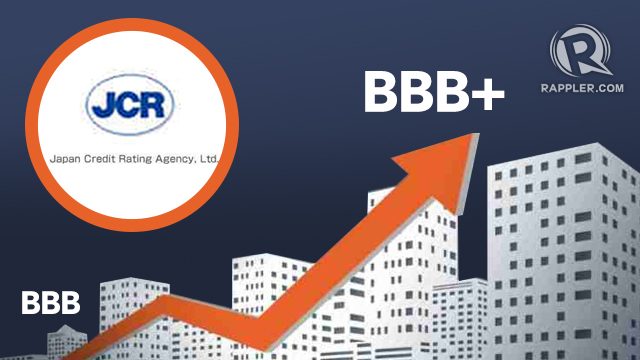 In a report posted on its website, JCR said it has upgraded the sovereign credit rating of the Philippines to BBB+ from BBB. The latest sovereign rating is a notch away from the minimum score in the “A” category.

The latest upgrade from JCR is the 22nd positive rating action for the Philippines from major international credit rating agencies including Standard & Poor’s, Moody’s Investors Service, and Fitch Ratings since 2010.

An investment grade is a seal of good housekeeping. It tells investors it is safe to do business in the country, and encourages them to put huge capital here. (READ: INFOGRAPHIC: What a credit rating upgrade means for Filipinos)

This development places the Philippines’ credit rating two places ahead of Indonesia’s BBB- and on a par with India, whose economy is 7 times the size of the Philippines.

The new credit rating is assigned a “stable” outlook.

“JCR is of the view that the Philippine economy will, by and large, sustain an annual growth of around 6% in the years to come driven by strong domestic demand,” the rating agency said.

The Aquino administration is committed to hold the fiscal deficit to gross domestic product (GDP) ratio within its 2% target from 2015 onward through enhanced tax collection efficiency along with proactive debt liability management.

The ratio stood at 0.6% in 2014 due partly to slower budget implementation, particularly on infrastructure projects.

JCR noted that the government aims to increase its annual spending on infrastructure development to at least 5% of GDP by 2016 and plans to further enhance its tax base through rationalization of fiscal incentives and enhanced tax collection efficiency.

“JCR will closely monitor the future progress on the fiscal front,” it added.

The JCR report also cited general stability in the country’s political situation even as potential candidates for national positions gear up for the 2016 elections.

“The latest ratings decision of JCR, which makes the Philippines very close to securing a rating within the ‘A’ category, appropriately reflects the strength exhibited by the economy,” Tetangco said. – Rappler.com