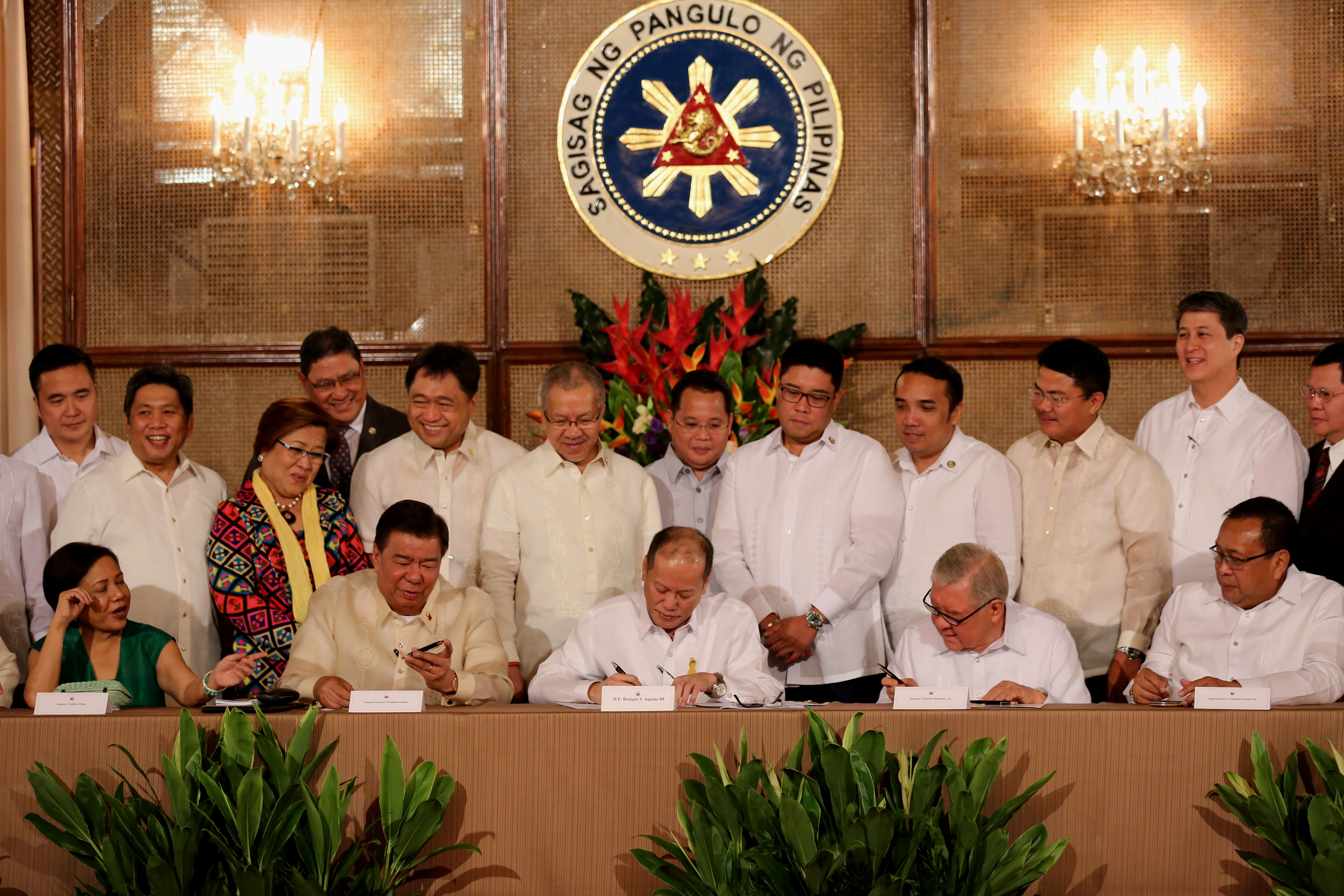 In a ceremony in Malacañang on Tuesday, July 21, Aquino signed the landmark Philippine Competition Act and the Foreign Ships Co-Loading Act which amends the 50-year-old Cabotage law. Both laws are seen to improve the country’s business climate.

(This is a proof that we are not easily contented with what has been done. Instead, we find possibilities to maximize the benefits for our bosses. Through these two laws, we are changing the crooked ways of lack of competition in business which do not benefit the people.)

Senate President Franklin Drilon said the new laws would help the country face the challenges and seize the opportunities that would arise from the Association of Southeast Asian Nations (ASEAN) market integration in December.

“A new anti-trust law and an amended Cabotage law is just what the doctor ordered, so to speak, since our laws and policies need to be more than capable if we are to fully capitalize all the prospects for economic growth that the AEC (ASEAN Economic Community) will bring,” Drilon said in a statement.

“Both bills form part of President Aquino’s legacy as they create a more level playing field on the competition side and offer cost reductions in domestic shipping,” Henry Schumacher, vice president for external affairs of the European Chamber of Commerce of the Philippines, said in a text message.

Both measures, Schumacher added, will benefit the Filipino consumer who potentially gets better goods and services at a better price.

The Philippine Competition Act finally gives the country its own law guiding competition, an area where the country has lagged behind most of the world and its ASEAN neighbors.

It is among the longest-running pending measures in Congress, taking 25 years before hurdling the legislative mill. The end goal is to benefit consumers with more choices and lower prices – products of market competition.

“The Philippine Competition Act will usher in a new era of doing business in the country,” said Senator Paolo Benigno “Bam” Aquino IV, co-author and principal sponsor of the measure. (Read: What consumers need to know about the PH Competition Act)

Businesses, whether big or small, will now be on equal footing as the law penalizes anti-competitive agreements and abuses of dominant players, he explained.

(Now, finally, both small and big businesses, the competition will be on producing high-quality products sold at reasonable prices, not [prices] based on under the table transactions or connections.)

Cartels, exemplified by the unwarranted spike in garlic prices last year, will also be eliminated under the law, he added.

Under the law, a Philippine Competition Commission (PCC) will be established within 60 days of the signing of the law. The President will appoint a chairperson, 4 commissioners, and an executive director.

The independent quasi-judicial body is tasked to look into anti-competitive behaviors, abuses in dominant positions, and anti-competitive mergers and acquisitions. (Read: Keep the devil away from the Philippine Competition Act)

The PCC can impose administrative penalties of a maximum fine of P100 million ($2.2 million) on the first offense, and P250 million ($5.5 million) for the second offense for anti-competitive agreements and abuses of dominant position.

Moreover, courts can impose criminal penalties of imprisonment from two to 7 years and a maximum penalty of P250 million ($5.5 million) for anti-competitive agreements done between and among competitors.

No penalties will be meted out within the first two years of implementation, however, in order to give firms found guilty time to restructure and reform.

The Department of Justice – Office for Competition (DOJ-OFC) will handle the prosecution of the cases.

The full positive effects of the law are expected to be felt in the next administration, in view of the time it will take to appoint the commission, constitute the implementing rules and regulations, and the transition period of the law. (READ: Is the Philippine Competition Act really a game-changer?) 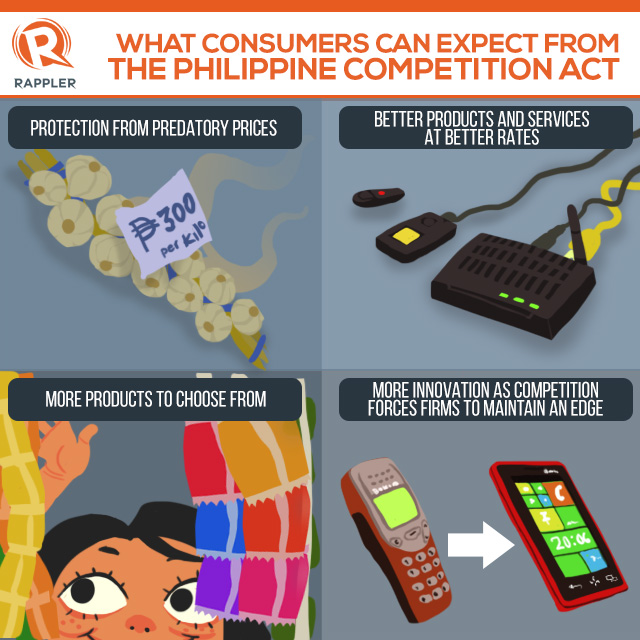 The law allows foreign ships carrying imported cargoes and cargoes for export to dock in multiple ports in the country.

The Foreign Ships Co-Loading Act is seen to reduce logistics costs for producers, create a more efficient import and export system, and lead to lower prices for consumers.

The law will also help decongest the major ports in the country.

Drilon said under the old Cabotage law, shipping dry cargo from Davao to Taiwan, for example, costs approximately $450 per 20-foot equivalent unit, as compared to $680 when shipped from Davao to Manila.

“By allowing foreign ships access to other ports in the country, the amendments will spur economic activity in these areas beyond Manila, and help free up space and decongest  the port of Manila, which before was the only place in the country where these foreign ships could load and off-load their cargo,” he said.

The amendment to the old law is also “good for preventing last year’s port congestion,” Nabuo Fuji, vice-president of the Japanese Chamber of Commerce and Industry, said in a text message.

“We’re pleased that the government saw that the underlying issue in helping the shipping industry to create more efficiency through lowering costs,” said Doris Magsaysay-Ho, president and CEO of Magsaysay Maritime Corporation.

Magsaysay-Ho stressed, however, that port infrastructure needs to be improved and that the private sector and government should work on a plan that addresses how to cluster production areas near ports and highways to further improve efficiency.