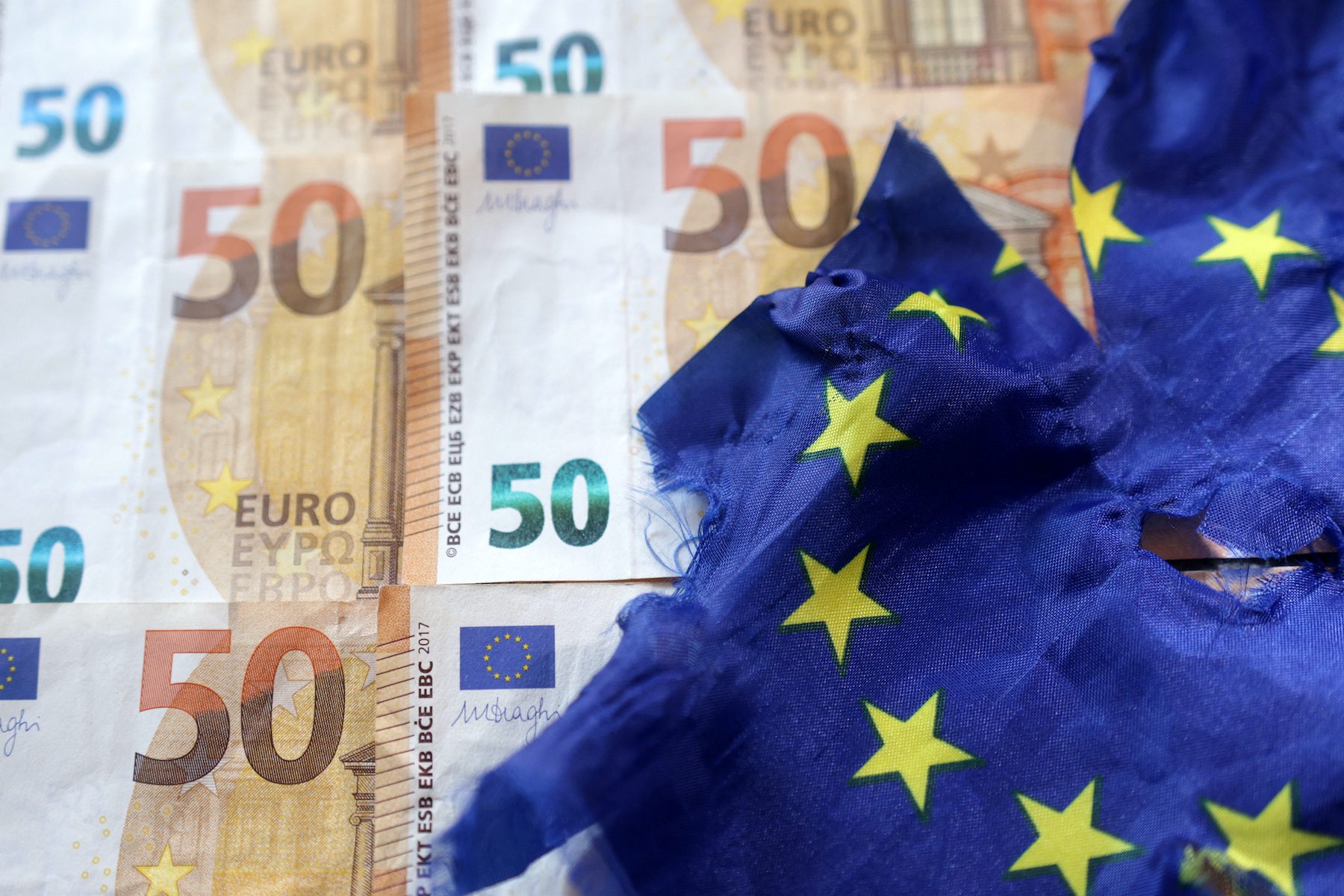 EURO. A torn European Union flag is placed on euro banknotes, September 7, 2022, in this picture illustration.

Facebook Twitter Copy URL
Copied
Despite some positive signs, European companies aren't out of the woods yet

LONDON, United Kingdom – Europe’s upcoming corporate earnings season is likely to show whether the renewed optimism about the economy that has buoyed equities in recent weeks is grounded in reality.

The pan-European STOXX index is up 6% since the start of the year, hitting its highest since April after better-than-expected economic data and improved German investor sentiment.

In a sign analysts were unprepared for such optimism, Citi’s economic surprise indicator for the eurozone jumped last week to its highest since July 2021.

Recent signs inflation could be softening, improved supply chains, revised global growth forecasts, and the sudden easing of three years of COVID-19 restrictions in China have raised hopes the corporate downturn may not be as severe as feared just a few weeks ago.

Falls in gas, oil, and other commodity prices over recent months have also eased some of the pressure on companies’ costs.

But Europe Inc isn’t out of the woods yet.

“Companies are telling us that it’s going to be harder to pass on rising costs to customers in 2023 as economic growth slows,” said Nigel Bolton, co-chief investment officer of BlackRock Fundamental Equities.

“We have already seen job cuts and a renewed focus on profitability in the technology sector, and we expect that theme to spread across sectors this year.”

On Friday, January 20, Ericsson said it would reduce headcount as the Swedish telecom equipment maker aims to slash expenditure.

Market expectations are already very low. Fourth-quarter earnings for STOXX 600 companies are forecast to have grown by 10.7% year-on-year, the slowest in two years, according to Refinitiv data.

That’s half the level expected just two months ago. Excluding the energy sector, growth would be 4.5%.

Revenue is tipped to rise 4%, the weakest since the first quarter of 2021.

That’s almost half its tally of 35 in the third quarter, which was the highest since the first three months of 2020, at the start of the pandemic.

Refinitiv data shows Europe Inc falling into recession later in the year too.

Companies are expected to report a decline in earnings for two consecutive quarters: a drop of as much as 6.8% in the second quarter and 8.8% in the third. Earnings are seen bouncing back to growth of 11.4% in the final quarter of the year.

Bernstein Research said its nominal earnings per share growth forecast for Europe for 2023 is at its lowest ever, at 0.6%, while inflation-adjusted earnings are seen falling 5%, reflecting the expectations for a recession in the region.

Burberry and Richemont provided some optimism, though, noting better sales in China ahead of the Lunar New Year holiday.

Investors will be scouring for comments on China, where surging COVID cases have raised concerns about further disruption after the world’s No. 2 economy reopened.

Wages are still a focus as a tight job market and strong growth in salaries add pressure on margins.

“A big question is how the past year’s surge in prices will affect wages, potentially delivering a second round of cost rises for companies and creating further price pressures,” said Toby Gibb, global head of investment directing at Fidelity International.

With expectations at rock bottom, investors may be prepared to ride out the corporate storm, though.