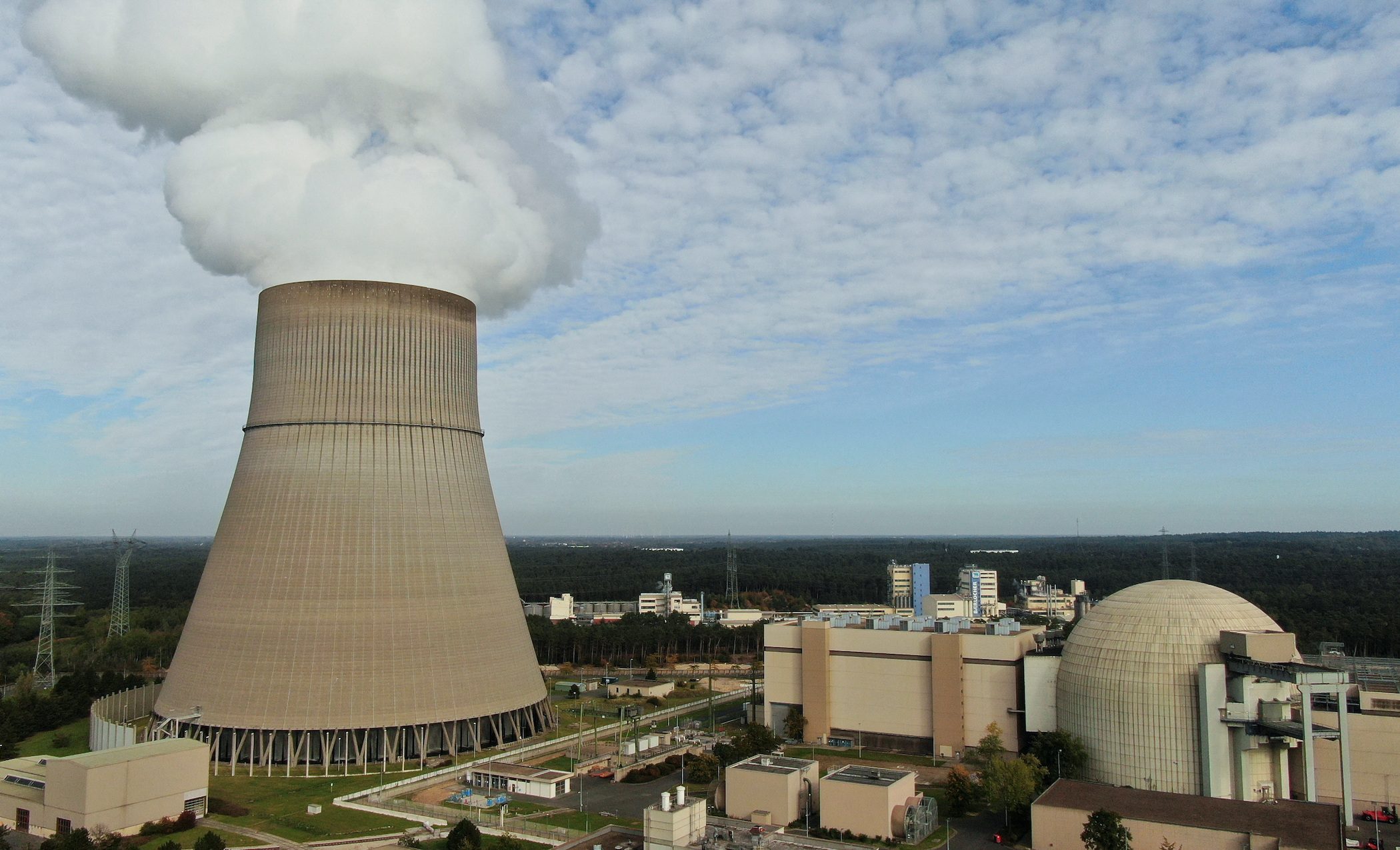 NUCLEAR ENERGY. An aerial view shows the cooling tower and the reactor of Emsland nuclear power plant, amid the energy crisis caused by Russia's invasion of Ukraine, on the outskirts of Lingen, Germany, October 12, 2022.

BERLIN, Germany – German Chancellor Olaf Scholz has asked the economy, environment, and finance ministries to lay the legal framework to keep the country’s three nuclear power plants operational until as late as April 15, 2023, a letter seen by Reuters showed on Monday, October 17.

Germany had planned to complete a phaseout of nuclear power by the end of this year, but a collapse in energy supplies from Russia because of the war in Ukraine has prompted the government to keep two plants on standby.

Lengthy disagreements within the ruling coalition government over the merits and drawbacks of nuclear energy delayed the implementation of a draft law to put the two plants on reserve beyond their planned phaseout at the end of this year.

As well as the Isar II and Neckarwestheim II plants already included in the draft law, Finance Minister Christian Lindner has been pushing to keep a third plant, Emsland, operational, which Economy Minister Robert Habeck – whose Green Party is historically anti-nuclear – agreed to.

The three plants have 4,300 megawatts (MW) of power capacity, contributing 6% to Germany’s electricity production this year.

“I would ask that the relevant proposed regulations be presented to the Cabinet as soon as possible as part of the distribution of responsibilities,” Scholz wrote in the letter dated on Monday.

Scholz also requested that the ministries present an “ambitious” law to increase energy efficiency, and put into law an agreement to phase out coal by 2030.

Lindner welcomed the chancellor’s request, saying the legal framework could be created immediately.

“It is in the vital interest of our country and its economy that we maintain all our energy production capacities this winter. The chancellor has now created clarity,” Lindner tweeted on Monday.

The economy ministry declined to comment, while parliamentary Greens group leaders said Scholz’s decision to put on reserve the Emsland plant was “unfortunate and had no factual or technical reason.”

“We will now discuss with our parliamentary group how to deal with the chancellor’s decision,” Greens leaders Katharina Droege and Britta Hasselmann said in a statement.

Environment Minister Steffi Lemke said Monday’s decision added clarity but reiterated that the nuclear phaseout would continue as there would be no lifetime extension beyond mid-April next year or new fuel rods.

“We will now immediately make all the necessary preparations to enable power operation of the Emsland power plant until April 15th,” a company spokesperson said.

EnBW said it took note of the decision but needed more clarity as soon as possible, adding that it would have to shut down its Neckarwestheim II plant by year-end, unless the government created a legal framework.

Klaus Mueller, the head of the country’s network agency, said Scholz’s request was a “clever compromise.”

Environmental Action Germany said the continued nuclear plants operation was unnecessary and dangerous, calling on the parliament to reject the chancellor’s proposal.

“With his lonely decision, the chancellor simply wants to have the aging reactors declared ‘safe’ by law,” said the group’s director Sascha Mueller-Kraenner. – Rappler.com