ECONOMY. Shoppers queue outside a grocery store in Manila.

Facebook Twitter Copy URL
Copied
(UPDATED) For the 4th quarter of 2020, the slump in gross domestic product is at 8.3% 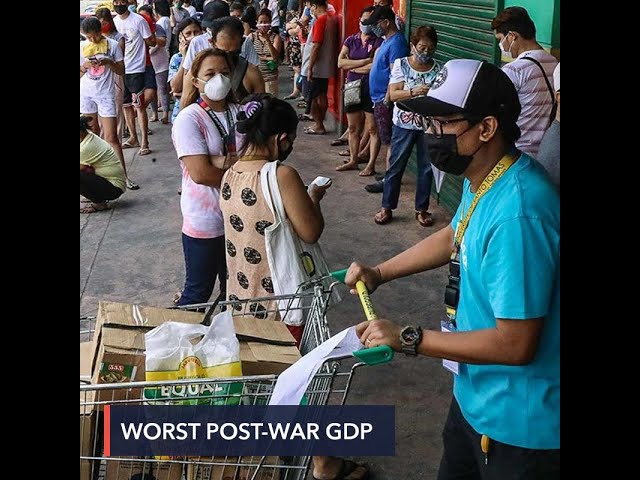 The coronavirus pandemic plunged the Philippine economy to its worst contraction since World War II, with gross domestic product (GDP) falling by 9.5% in 2020.

The latest figure announced by the Philippine Statistics Authority on Thursday, January 28, is the sharpest dip on record since available data dating back to 1947 and the first GDP decline since 1998 (-0.5%).

While less severe than the 11.4% slump seen in the 3rd quarter and the 16.9% crash in the 2nd quarter, the contraction in the 4th quarter is still sharper than what most analysts expected in various polls.

On an annual basis, industry posted the largest contraction of 13.1%, while services and agriculture slumped 9.1% and 0.2%, respectively.

Other services, such as personal care services, entertainment, salons, casinos, and museums, contracted the most in the 4th quarter with a -45.2% growth rate.

While figures were grim in 2020, acting chief state economist Karl Chua noted that “prospects for 2021 are encouraging.”

“We see no reason why the economy cannot bounce back once community quarantines are further relaxed. The halving of the unemployment and hunger rates from record highs as we gradually relaxed the quarantine in the 2nd semester of 2020 shows that economic potential remains, and only held back by excessive risk aversion,” Chua said.

Chua added that Filipinos would have to manage risks and learn to “live with the virus,” as prolonging the status quo of lockdowns “is not an option.”

“Further opening the economy will entail increasing the public transport capacity, allowing gradual face-to-face schooling beginning with pilot cases, and broadening the age group allowed to go out, all with the appropriate safeguards,” he said.

While the economy contracted sharper than during the debt-ridden Marcos years, ING Bank Manila senior economist Nicholas Mapa is not expecting the government to turn into some cavalry, as the Bangko Sentral ng Pilipinas already did its part and the government has showed no signs of beefing up fiscal response.

“Despite the 9.5% contraction in the economy, we are not counting on authorities to whip out any form of stimulus to offset the downturn, both on the monetary or fiscal front,” Mapa said.

For Rizal Commercial Banking Corporation chief economist Michael Ricafort, the government’s push for tax reform would be an important pillar for economic recovery this year.

“Reform measures such as the CREATE bill would also become another important pillar for economic recovery as this would become the country’s biggest stimulus measure with P40 billion for the 1st year and at least P600 billion for the next 6 to 7 years,” he said.

Ricafort also noted that the arrival of vaccines would play a big part in the economic recovery.

The earliest arrival of vaccine orders will be in February, but only for medical frontliners. Other orders are expected to arrive in the 2nd half of the year.

Long way out of recession

Most countries in Southeast Asia have yet to announce full-year GDP figures, but some nations like Vietnam have resisted the global downturn, while Singapore posted better-than-expected numbers.

The Philippines’ slow recovery can be attributed to the further easing of lockdown restrictions amid continuous rising cases, increased spending during the holidays, and the seasonal uptick in remittances from Filipinos abroad.

However, strong tropical cyclones in October and November wiped out gains in agriculture, which in turn pulled down GDP and pushed inflation up.

These ambitious projections were made along with the assumption that the entire country would still be under some form of quarantine restrictions for the entire 2021, and that the vaccine would be widely available by 2022. – Rappler.com