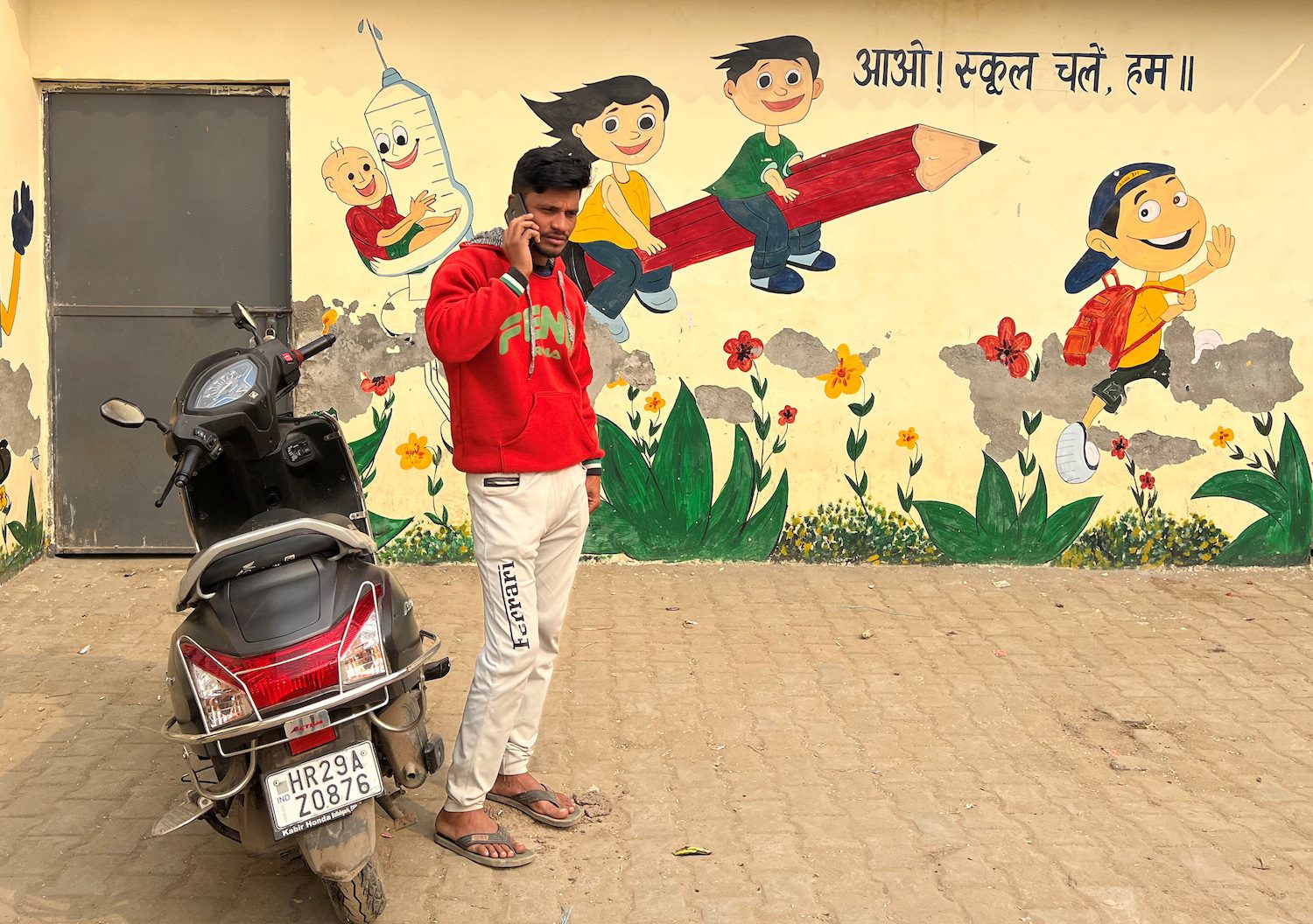 JOBLESS. Ravi Verma, 27, an unemployed man who lost his job in November 2022, makes queries for a new job on his mobile phone outside a community center in Faridabad on the outskirts of New Delhi, India, January 13, 2023.

FARIDABAD, India – Ravi Verma, hired by an electrical parts manufacturing firm early last year as India’s economy surged, was fired in November when the company lost several export orders. He has since remained unemployed, unable to pay back a 100,000 rupee ($1,224) loan he took to buy a two-wheeler scooter.

Verma is among thousands of Indian workers who lost jobs as the global slowdown hit exports, while the reentry of nearly 20 million workers into the job market after the pandemic has aggravated the problem.

The rising unemployment in India belies other indicators suggesting the economy is undergoing a healthy rebound from the COVID-19 pandemic. Instead, the surge in people looking for work, many of them rural migrants, raises concerns about consumption and longer-term growth prospects.

“I have been looking for a job for two months,” Verma said, looking up from a Hindi language newspaper he was reading at a community center close to his one-room home in the industrial town of Faridabad in northern India.

“I face a risk of loan default if I don’t get a job soon.”

The urban unemployment rate swelled to 10.1% in December, although the total number of jobs in India touched a pre-pandemic level of 410 million, data compiled by Mumbai-based think tank Centre for Monitoring Indian Economy (CMIE) showed.

Urban unemployment spiked during the pandemic years, largely because of lockdowns, but before that it hovered between 6% and 7%, according to CMIE data. Previously, it reached a high of 11.2% in August 2016.

“Nearly 37 million workers were looking for work in December,” said Mahesh Vyas, managing director of CMIE, citing a rebound in labor force participation rate driven by the return of women workers and rural youth joining the labor market as fears of the pandemic eased.

That was the highest number of unemployed since June 2021 at the height of the pandemic, he added.

Globally, India remains a “bright spot” amid growing fears of a recession in the United States and Europe, and the economy is projected to grow below 6% in the next financial year starting in April, down from estimated 7% growth in the current fiscal year.

But hiring in export-dependent manufacturing sectors like engineering, textile, and software has slowed as companies face a decline in overseas demand – reflected in falling exports of manufactured goods, down 12.2% year-on-year in December.

For Prime Minister Narendra Modi, unemployment is emerging as a major challenge along with high inflation, and could prove costly in state elections later this year and a general election in mid-2024, analysts said.

“The unemployment problem has become acute,” said Arun Kumar, an economist and a former professor at Delhi’s Jawaharlal Nehru University. He said small businesses – which employ nearly 90% of workers – were shutting down and growth was being led by large companies and services.

Hiring in IT, software, education, and retail fell up to 28% in December from a year ago, data compiled by Naukri.com, India’s biggest recruitment consultancy, showed, though it remained resilient in insurance, banking, and auto sectors.

The online platform said it saw a near 14% rise in job applicants to around 7.6 million in 2022 from a year earlier.

According to the latest government data, the number of workers joining firms with social security benefits fell for the third month in a row to 0.7 million in October, while the urban labor force participation rate rose to 47.9% in the September quarter, up 1% from a year earlier.

Many young workers say they prefer to wait for skilled jobs they have been trained for, instead of accepting badly paid menial jobs on offer.

This has pushed up unemployment in some states like Haryana, Rajasthan, and Bihar to record levels.

In the northern state of Haryana – a manufacturing hub where global companies like Maruti Suzuki are located – the unemployment rate shot up to a historic high of 37.4% in December from around 20% before the pandemic.

“I need at least a 20,000 rupees salary after three years of a course in electronics,” said Anjali Yadav, a female student at a polytechnic college in Faridabad, which is in Haryana.

Factories and firms there were not ready to pay more than 10,000 to 12,000 rupees a month, said Mithlesh Kumar, a trade union leader.

Another job seeker, Uttam Shaili, 22, said that after a two-year course studying to be an electronics mechanic he would prefer to “stay at home” than accept a low-paying job.

“The loss of jobs in IT and some manufacturing sectors has hit consumer sentiment, and would hit household spending and business investments,” said Sunil Sinha, an economist at India Ratings, the Indian arm of Fitch Ratings agency.

He said there was a growing fear of further job losses as companies face sluggish demand in the domestic and overseas markets.

Rahul Gandhi, the leader of the main opposition Congress party, has focused on unemployment, high prices, and what he says are Modi’s divisive politics in a cross-country march on foot.

“The economy is on a recovery path and inflation has moderated,” he said. “The annual budget next month will continue the policy of stimulating the economy through incentives for more sectors.”

Critics said this may not work in the short term.

Incentives given to a few corporates are not creating enough jobs, said Kumar, the economist, adding the economy was in a “K-shaped” recovery – growth in big companies accompanied by a decline in the number of small firms and jobs.