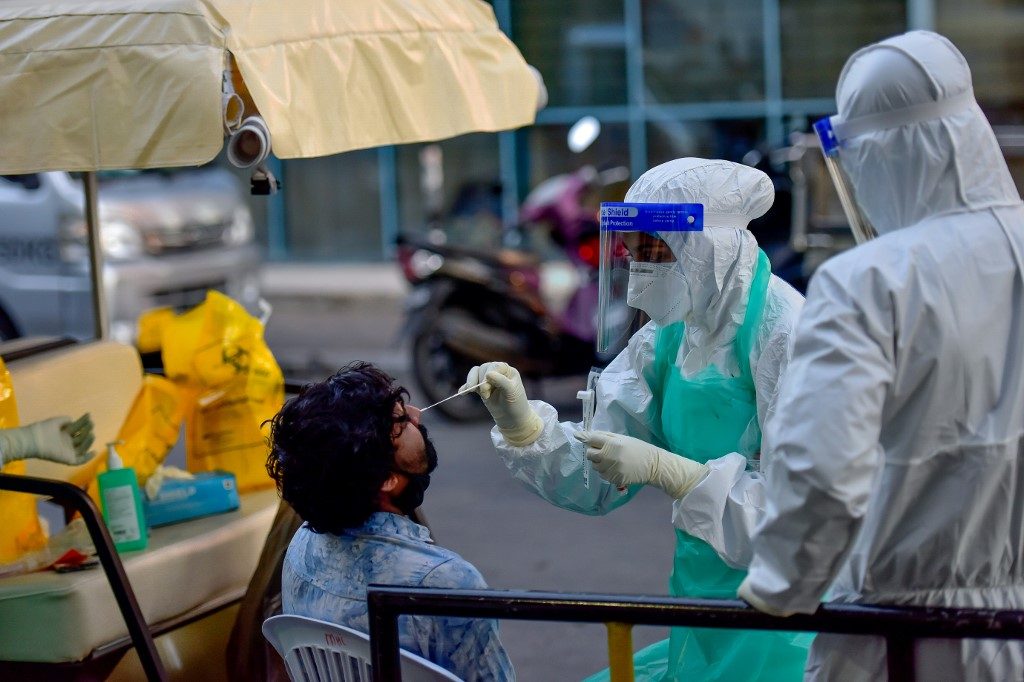 A medical worker takes a swab sample from a man to be tested for the coronavirus on a street in Male, Maldives, on June 5, 2020. (Photo by Ahmed SHURAU / AFP)

India on Sunday, September 20, announced a $250-million loan to the Maldives to boost its coronavirus-battered economy in a further bid to counter China’s growing financial footprint in South Asia.

The Indian Ocean archipelago, renowned for its luxury resorts, has been badly hit by the pandemic, with foreign tourists failing to flock back in large numbers after international flights restarted in mid-July.

India’s High Commission in the Maldives said the loan was being provided after a request by Maldives President Ibrahim Mohamed Solih for “financial assistance to overcome the difficult economic situation.”

“The Maldives is at liberty to use the money in repairing the domestic economic situation in line with its own priorities,” it said in a statement.

A sale of treasury bonds issued by the Maldives government to State Bank of India (SBI) will raise the money, with 10 years given for repayment, the statement added.

The assistance follows a $500-million pledge by New Delhi in August to help build bridges and causeways in the nation of 1,192 islands located on major East-West shipping lanes.

Under former president Abdulla Yameen’s administration, which was ousted in 2018 elections, the Maldives borrowed some $1.4 billion from Beijing for expensive infrastructure projects, according to Solih’s government.

The loans added to critics’ concerns that Chinese aid in Asia and beyond was saddling countries with unsustainable debts while expanding Beijing’s sphere of influence.

The bond takes New Delhi’s total pledged financial assistance to the Maldives to over $2 billion since Solih came to power, according to India’s foreign ministry.

The country, which still has a nighttime curfew in place to combat the virus, has recorded more than 9,600 infections and 33 deaths from COVID-19.

The Asian Development Bank forecasts the Maldives’ economy to contract by 20.5% this year, compared to growth of 5.9% last year. – Rappler.com