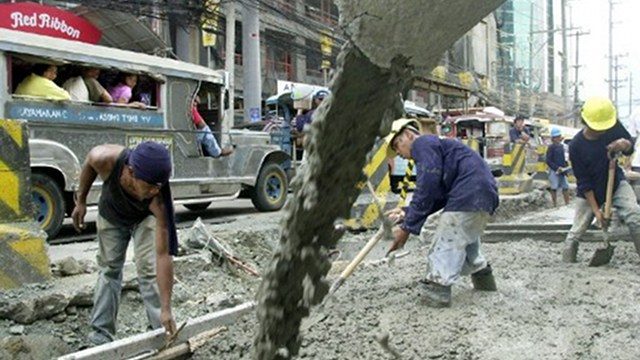 MANILA, Philippines – State spending on infrastructure – a main driver of the economy – ended second quarter of the year on an accelerated note due to high fund use of the Department of Public Works and Highways (DPWH). 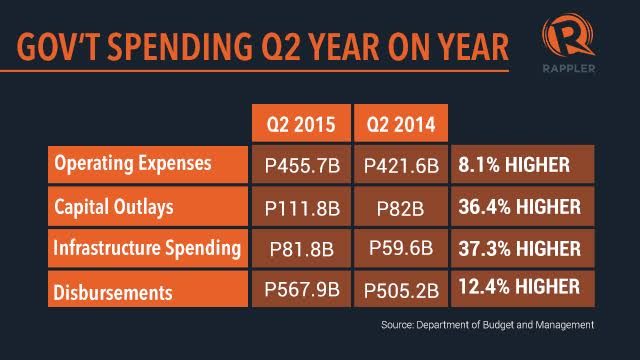 The Department of Budget and Management (DBM), in its assessment of the national government’s disbursement performance during the second quarter, said disbursements for infrastructure and CO were due largely to the higher requirements of infrastructure development programs under the DPWH.

Faster disbursements for public infrastructure and CO from April to June this year helped raise total spending to P567.9 billion ($12.17 billion) in the second quarter, reflecting a 12.4% year-on-year increase and bringing government spending to P1.07 trillion ($22.93 billion) in the first half of 2015.

“Second-quarter figures show that government spending is now at a steady and encouraging clip,” DBM Secretary Florencio “Butch” Abad said in a statement.

“Furthermore, infrastructure spending will continue to play a major role in firing up disbursements, as the Aquino administration sustains the expansion of public infrastructure in the country,” he added.

DBM said the DPWH performed strongly in the second quarter, spending P8.83 billion ($189.23 million) over program, bringing its first half spending figures to P4.43 billion ($94.94 million) in excess of program.

This is because of the administration’s drive to improve debt burden management, he added.

“When we devote less of the budget to national debt, we can allocate more resources to anti-poverty and economic development programs,” Abad said.

The budget chief also emphasized the need to ramp up agency expenditures in light of the administration’s goal of rapid and sustainable economic growth.

The Philippine Statistics Authority will announce on Thursday, August 27, the Philippine economic growth during the second quarter.

The economy’s growth in the first quarter is slower than the 5% gross domestic product growth in the same period in 2014. It was also down from 6.6% in the 4th quarter last year, and the slowest pace since the 3.8% growth recorded in the last quarter of 2011.

“If we intend to sustain our country’s growth momentum, our departments and agencies will have to catch up with their spending targets and optimize their funds,” Abad said. – Chrisee Dela Paz / Rappler.com