How a brief thunderstorm can cause horrendous Metro traffic MANILA, Philippines – In the evening of September 8, just as the Tuesday rush hour began, a sudden thunderstorm hit parts of Metro Manila.

Photos of soaked commuters lumbering through shin-deep water were soon posted on social media. Makati City, the country’s business capital district, “lit up like a Christmas tree,” a netizen remarked satirically. Urban Filipinos are becoming all too familiar with such episodes.

With Tuesday’s downpour, 4 flights were delayed, Light Rail Transit Line 2 (LRT2) trains were reduced to 5 from 8, the tunnel of the Metro Rail Transit Line 3 (MRT3) between Buendia and Ayala was flooded, and thousands of commuters and motorists were stranded in horrendous traffic gridlock after several highways in Metro Manila were flooded, officials of the Transportation department said in separate mobile phone replies.

With inadequate pumps and drains, even brief heavy rain can turn Metro Manila into a swimming pool, bringing traffic to a halt, Jose Regin Regidor, research fellow at the National Center for Transportation Studies at University of the Philippines Diliman (UP-Diliman), told Rappler in an email.

The result: A nightmarish traffic that has been costing the Philippines a staggering P2.4 billion ($51.18 million) a day. This will likely increase to P6 billion ($127.96 million) a day by 2030 if the situation is not addressed, according to a study done by the Japan International Cooperation Agency (JICA).

The country’s urban sprawl has been expanding much faster than its drainage infrastructure could catch up, Rene Santiago, president of consultancy Bellwether Advisory Incorporated, said.

“There is no way to prevent heavy rains. Road capacity decreases during heavy downpour, as vehicles have to slow down due to poor visibility and slippery roads – if not flooded roads. In one intersection I saw, traffic lights conked out. Most of our roads are already at saturation point – such that weather disturbance leads to gridlocks,” Santiago said in an email.

According to Regidor, the government could do very little to prevent the congestion seen by a lot of people on Tuesday.

“For one, we experienced intense rainfall that was comparable to extreme rain events like Ondoy in 2009. Road drainage – even assuming the designs followed standards – could not handle such amount of rainfall, leading to flash floods that ultimately caused the congestion and inconvenienced commuters,” Regidor, assistant professor at UP-Diliman College of Engineering, said. 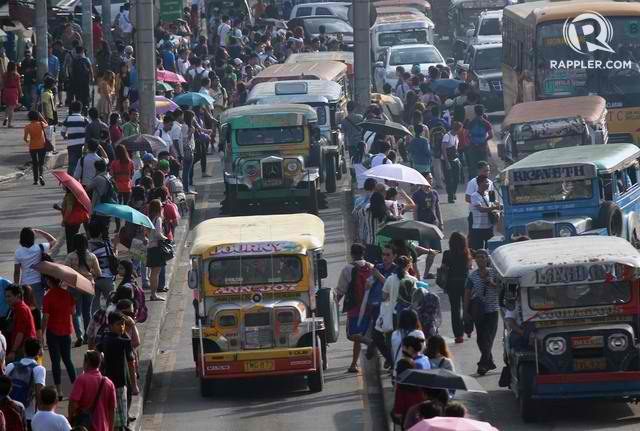 The anatomy of the problem

To make matters worse, the sorry state of public transport basically makes commuters want to own and drive or ride their own vehicles, leading to a “car-centric urban transport,” Regidor said.

In a study Santiago presented to the National Academy of Science and Technology last year, he said the National Capital Region accounts for nearly 36% of the country’s economic output. The urban area has 17 cities and municipalities and is home to 12.7 million people.

“The concentrated economic activities beget massive traffic congestion,” Santiago said in his study, and added that nearly 56% of the country’s 7.2 million motor vehicles run on 14% of the nation’s total supply of roads.

“Metro Manila has nearly twice more vehicles per kilometer of roads than Singapore; its population density of 19,126 persons per square kilometer in 2010 is even higher than Tokyo metropolis or Singapore’s 7,100,” the study read.

Santiago also said that Singapore has 5 MRT lines spanning more than 153 kilometers, Metro Manila only has 3 with a combined length of 50 kilometers.

“If we had good public transport, then there would probably be less cars on the road and public transport in the form of trains, and buses could convey people more efficiently despite flash floods on our roads,” UP-Diliman’s Regidor said in an email.

According to Santiago, the limits to road building dictate that more people should share rides by taking public transport and minimize car use.

“That would necessitate a radical re-invention of the public transport system that has been caught – with consent – on a low performance equilibrium trap in the last 40 years,” Santiago said.

On this yardstick, Santiago said Metro Manila’s road network of 4,755 kilometers is already 80% on average. Thus, operating speed is generally below 20 kilometers per hour (kph), while 40 kph is deemed free-flowing. 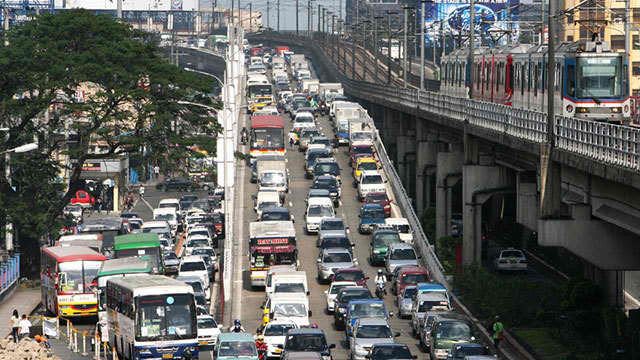 The solution to the problem

There is no silver bullet in solving traffic congestion, which requires a comprehensive set of measures implemented over several years, both Regidor and Santiago said.

“The band-aid solution to this problem could be to declare a non-working holiday. Unfortunately, it works only if announced before noon,” according to Santiago.

Santiago’s study showed that Metro Manila has not been lacking in decongestion plans.

The study showed that the earliest plan was drawn up by Japanese consultants in 1972.

“Imitating the Tokyo radial network of railways, the study proposed 11 underground rail transit lines. At that time, it was a fantasy plan – elegant engineering-wise but very impractical. Not surprisingly, nothing came out of that plan,” the study read.

“Then came the Metro Manila Transport Land Use and Development Planning Project of 1975 which was funded by the World Bank. Its claim to fame – aside from framing the issue of transport with land use – was the LRT Line 1. While its proposal was for at-grade tramway, what got implemented in the 1980s was an elevated LRT,” it added.

“The road pricing proposal never took off, fortunately perhaps, because it suffered from two basic infirmities: the CBD (central business district) was already moving from Manila to Makati, and the technology was not yet there to support effective implementation,” it noted.

“Some components of these plans were implemented – but they were Sisyphean in character. All of these plans from 1975 to 2011 were constrained by small budget envelopes,” Santiago said.

The latest is the Transport Roadmap for the Greater Capital Region of JICA, which includes a bold “dream plan” to vanish traffic congestion by year 2030.

“It also calls for a radical restructuring of the current surface public transport system comprising the jeepney and bus modes,” the study read.

The dream plan is estimated to require P2.61 trillion ($55.71 billion) to fix traffic congestion that is costing the economy P2.4 billion ($51.18 million) a day. (READ: The cost of traffic in Metro Manila)

“Unlike the previous 3 plans, this one can fit into the projected budget envelope to year 2030. The prospect of relief, however, is clouded by institutional arthritis – an inability to execute projects of the transport,” Santiago said.

Changing the behavior of motorists, commuters, and public transport operators is less expensive but more difficult to execute, and it entails sustained efforts over a long period of time.

Daily commute could be less stressful, if only drivers were more civil to each other and obey traffic rules.

“Replacing the archaic jeepneys with its modern version would be a step in the right direction,” the transport expert added.

According to Santiago, the traffic woes of Metro Manila can disappear – but only if the Philippines can liberate itself from decades-old “jeepney mentality.” (READ: #AnimatED: Our collective guilt over Metro Manila traffic)

“It is akin to a bamboo ceiling that has stymied past efforts and blindsided a citizenry into accepting traffic jams as an inevitable fact of urban living,” Santiago said. – Rappler.com