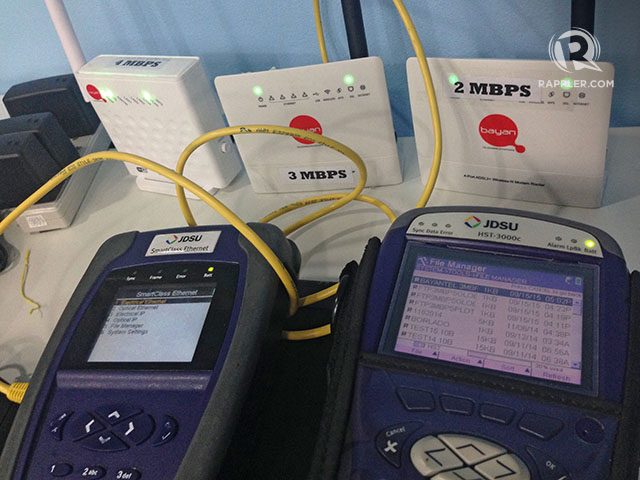 “ISPs are monitored from different locations in Metro Manila at different times of the week. During each testing, we use our JDSU Handheld Services Testers, which cost about a million pesos each, to monitor and measure the speed of fixed broadband,” NTC deputy commissioner Delilah Deles told reporters in her office in Quezon City.

Data from NTC showed that Bayantel registered the slowest speed of “563 kilobits per second (kbps)” for a fixed broadband service advertised with “up to 2 mbps (megabits per second) downstream.” Based on the results, Globe Telecom, PLDT, and Sky Cable were acceptable except Bayantel, NTC director Edgardo Cabarios said in a phone interview on Friday, September 18. “Bayantel, however, showed the slowest speed; so they have to diagnose their network and improve it before the actual testing next month,” Cabarios said.

Should Bayantel fail to improve its network before October, Cabarios said it has to inform its subscribers that it can only provide a speed of up to around 563 kbps.

Bayantel: Testing may not be accurate

For Bayantel, “[t]he data presented from the pilot NTC test of measuring the Internet speed of fixed broadband speed of service providers were the initial results taken from a test environment, located at a specific location (the NTC premises) and point in time.”

“There is reason to believe that it may not present an accurate reading of our service to our customers. There are a host of other factors – technical and non-technical in nature – that could very well affect the speed of Internet service like latency error, signal loss, proximity of network equipment, etc,” the Globe subsidiary said in a statement.

“Currently Globe and Bayan are working closely with NTC to validate the test results and identify areas of improvement to better serve its customers,” Bayantel explained.

All 4 ISPs tested, however, were within the standard parameters of 256 kbps for fixed-line broadband services set by NTC, Cabarios told Rappler.

NTC signed on August 13, Memorandum Circular No. 07-08-2015, stating that “broadband” for fixed-line services must have data connection speed of at least 256  kbps – the standard of the International Telecommunications Union.

By definition, ISPs will not be able to say they provide broadband unless they give consumers at least 256 kbps.

Actual testing of fixed broadband speeds, according to the NTC director, will be in October.

“It will be twice a week then we will get the average of the tests per month. If we find out that a telco has been advertising a certain service as broadband but the speed is less than 256 kbps, we can file a complaint or anyone can go to DTI (Department of Trade and Industry) to file a complaint as it is considered false advertising,” Cabarios said.

The NTC official said that for the first offense, the regulator will issue a verbal warning; but for the succeeding one, the “ISP at fault will be penalized P200 ($4.28) a day until it complies with the rules.”

Minimum speeds for services advertised as mobile broadband – which is utilized by about 90% of Internet users in the Philippines – will be out by November.

Cabarios said NTC is looking at a minimum advertised speed that is “slower than fixed broadband’s 256 kbps” for mobile broadband services.

In its draft circular, the NTC wants to monitor and measure mobile Internet services in terms of download and upload data rate, jitter, packet loss, as well as latency.

The local telecommunications regulator said measurement of speeds would take into consideration “uncontrollable variables” including signal strength depending on the distance of test locations from the access network. – Rappler.com