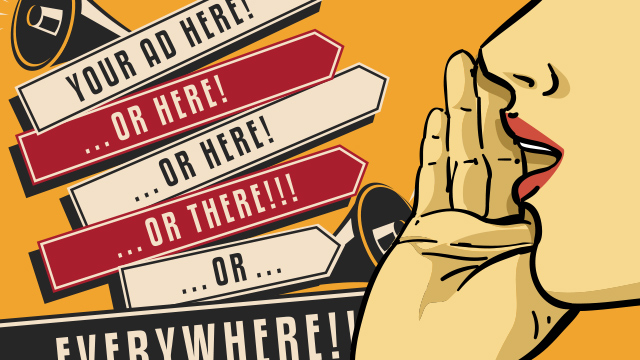 MANILA, Philippines – Word-of-mouth recommendations from people they know and trust continue to be the most effective form of advertising for Filipinos, according to a new report released September 28 by Nielsen.

More than 9 in 10 Filipino consumers (91%, up one point from 2013) trust word-of-mouth recommendations from people they know, the highest trust level indicated among Southeast Asian consumers for this ad format. “Trust, however, is not exclusive to those in their inner circle,” Nielsen noted.

Based on the results of the Nielsen’s Global Trust in Advertising Survey, 80% of Filipino consumers trust editorial content (such as stories) while 75% find consumer opinions online credible.

“While word-of-mouth endorsements continue to earn the biggest trust of consumers, extending the conversation in the digital format can result in quicker and viral results,” Stuart Jamieson, Nielsen Philippines managing director said.

He added that marketers can widen the circle of trust of consumers by engaging passionate brand advocates to amplify their message and give them a compelling reason to talk.

“Trust is fragile. Practice transparency and accountability because if trust is broken, your advocates also have the power to damage credibility and reputation,” Jamieson said. (READ: Marketing to millennials)

Ads on television, newspapers, and magazines continue to be among the most trusted forms of paid advertising in the Philippines, surpassing global trust level averages.

Seventy-five percent of consumers in the Philippines say they trust ads on TV (versus 63% global average), closely followed by ads in newspapers at 74% (compared to 60% globally), and ads in magazines at 70% (versus 58% global average).

“Cross-platform ad exposure drives greater memorability and brand lift than single platform exposure, even when adjusted for frequency,” he said.

Close to 6 in 10 (59%) Filipino respondents say they completely or somewhat trust ads on social networks while ads served in search engine results have stayed consistent since 2013 at 56%.

Online video ads recorded a positive shift in trust levels compared to 2013, up 5 points to 56% while trust for online banner ads also improved by 3 points to 49%.

The Nielsen report also showed that although trust and action are clearly linked, credibility alone does not drive purchase.

Filipino respondents (the survey polled 30,000 online respondents in 60 countries) said they are more likely to take action on advertising formats, exceeding trust in all formats except editorial content (80% trust and action).

Respondents that trust the recommendations of people they know said they take action on these opinions majority of the time (91% trust; 93% take action. (see chart 1). 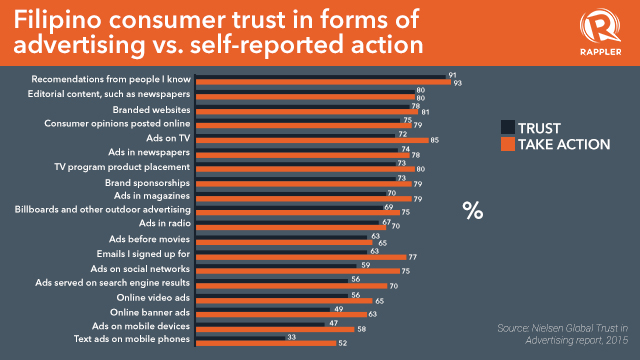 “TV continues to be a major influencer in the purchase decision of consumers,” Jamieson said.

But formats which earned lower trust levels can be still very effective in driving consumers to the point of purchase, the survey results also noted.

“The formats where action exceeds trust by the greatest margin share a common attribute: easy access to products or services. Online and mobile formats make it easier for consumers take quick action on the advertisement,” Jamieson said. ”With just a click, consumers are directed to a place where they can receive more information or purchase the item.”

Advertising that used real-life situations was the most likely to resonate with Filipino consumers, followed by ads that are family-oriented, health-themed, value-oriented, and humorous (see chart 2). 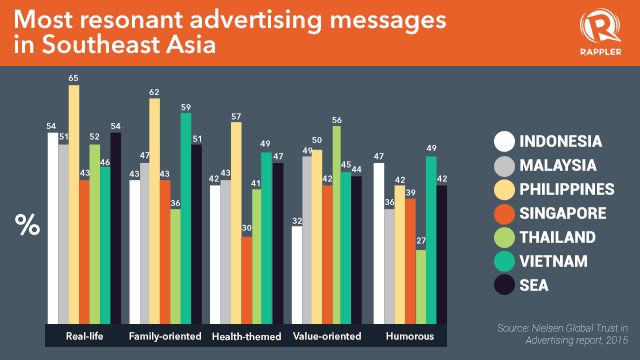 “The advertising medium is only part of the formula for reaching consumers. It’s important for consumers to identify and connect with both the brand and message,” Jamieson said.

“Advertisements that feature relatable situations and comedic relief, and which focus on family, values, and health greatly appeal to consumers and elicit the most positive response,” he added. – Rappler.com