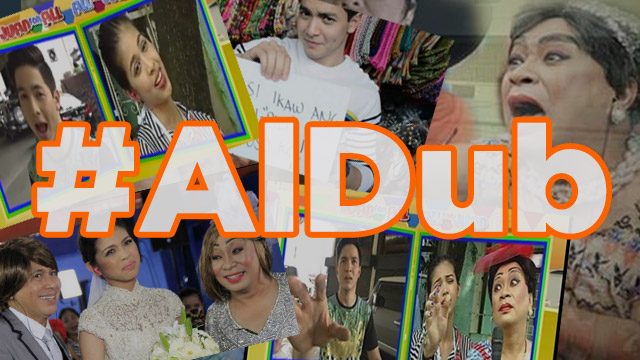 Facebook Twitter Copy URL
Copied
GMA Network is hopeful that public attention is not diverted from the alleged signal disruptions on SkyCable during the airing of Eat Bulaga, which carries the popular #AlDub segment

MANILA, Philippines – GMA Network, Incorporated on Friday, October 2, clarified that the ABS-CBN TVPlus complaints from some of its viewers are not related to its complaints against SkyCable Corporation on signal disruptions during the airing of noontime show Eat Bulaga.

GMA, in a statement, said it expressed hope that public attention would not be diverted from the “pressing issue” which is GMA’s signal disruption on SkyCable.

GMA said that ABS-CBN’s letter to the National Telecommunications Commission (NTC) on September 24, asking GMA to explain its signal loss on ABS-CBN’s TVPlus black boxes “has nothing to do with GMA’s recent complaints regarding its signal disruption on SkyCable.”

“Our recent complaints are about GMA’s signal loss during Eat Bulaga’s Kalyeserye segment on SkyCable and not on the TVPlus boxes,” GMA said.

“These recent complaints on the TVPlus boxes did not come from us. We are assuring the cable-subscribed public that, as the NTC is aware of, GMA had long since provided 3 independent links, which are periodically maintained to ensure the reliable and clear delivery of GMA and GNTV programs to SkyCable’s headend,” said GMA Senior Vice President for Engineering Elvis Ancheta.

“We certainly hope that the attention of the viewing public will not be diverted from the more recent and pressing issue at hand, which is GMA’s signal disruption on SkyCable, and trust that the NTC will immediately resolve the issues we raised against SkyCable,” Ancheta added.

The Felipe Gozon-led network has two pending complaints with the NTC dated August 25 and September 17, seeking immediate action regarding its signal loss on SkyCable either before or during the Kalyeserye segment of Eat Bulaga.

GMA said both complaints are supported by viewer feedback on social media, email, and through the hotline of the network.

The Gozon-led network on October 1 filed with the NTC its third batch of complaint of the same nature, supported by screenshots and video recordings of the signal discrepancies taken by the cable subscribers themselves.

“As far as ABS-CBN TVPlus boxes are concerned, we have submitted only one complaint with the NTC and that was in February this year, long before the Kalyeserye started on Eat Bulaga,” GMA Vice President for Legal Affairs Lynn Delfin said.

“Once again, we appeal to the NTC to investigate the complaints of inconvenienced SkyCable subscribers and to take the appropriate action against the service provider,” Delfin added. – Rappler.com