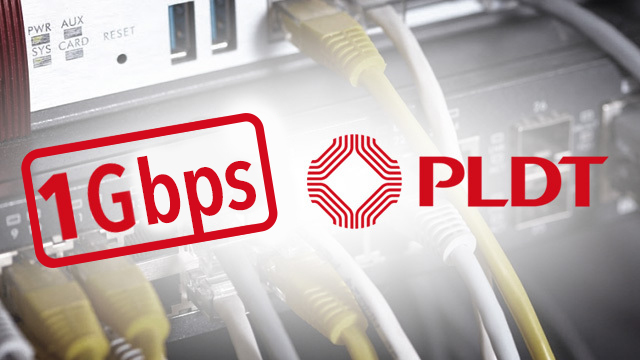 Although the telecom company did not disclose how much it invested for the service, PLDT said PLDT Home Fibr has the “widest reach of fiber-to-the-home (FTTH) facility [that] spans to 100,000 kilometers nationwide.”

But PLDT (through its corporate communications department) clarified Wednesday, October 21 via SMS that the company is offering a 1-Gigabit plan, not a 1-Gigabyte plan as it announced Tuesday.

NTC said last month that actual testing of fixed broadband speeds will start this month. But NTC director Edgardo Cabarios did not respond via phone why his office has not started its actual testing yet. 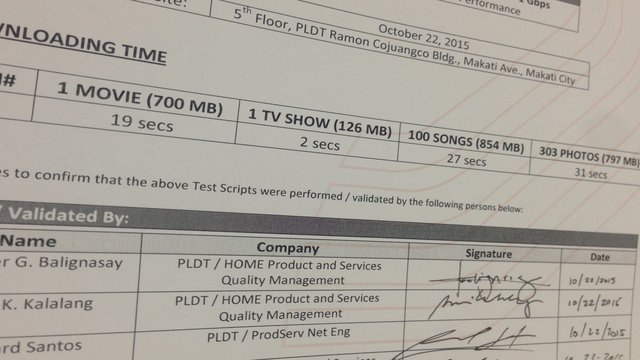 Ahead of NTC, PLDT on Thursday, October 22 invited select media outfits in its headquarters to witness as it tests its newly advertised 1 Gbps fixed broadband service.

A 1-Gbps connection has a data transfer rate of approximately 125 megabytes per second (MB/s). This, however, may not always be the case.

PLDT Spokesperson Ramon Isberto in July explained via e-mail why some subcribers encounter service interruptions for their fixed broadband plans.

“Subscribers may, for example, encounter slow service if the websites that they are accessing have a lot of traffic at that point of time. That is a function of the website’s capacity.” he said.

“We’ve also had cases where the degradation of the DSL service was caused by defects in the in-house wiring of the home or the condominium building of the customer,” Isberto added.

He also said that many DSL connections have WiFi modems, wherein data service quality is affected by the quality of the modem, the strength and reach of its signal, the distance of the user from the modem and presence of obstructions such as walls and partitions.

“The number of people accessing your WiFi also impacts on service quality – which is why it makes sense to install passwords for WiFi access,” Isberto added as he pointed out probable reasons subscribers encounter slower-than-expected connection.

The Philippine government has redefined broadband services and set the minimum speed at 256 kilobits per second, which consumer groups said could be the first step to real reforms in the country’s telecom industry. The country though is way behind its neighbors in Asia in Internet speed, where some of the fastest Internet speed in the world are found.

PLDT said the newest offering also runs on fiber-optic technology – which is touted as the world standard for broadband.

Early this year, PLDT Home Fibr also upgraded the speeds of all its plans from a minimum speed of 8 megabits per second (Mbps) to 20 Mbps, all the way up to the 100 Mbps plan which was boosted to 200 Mbps.

“These massive speed boosts and the new symmetrical speeds, combined with our unparalleled offers let our subscribers experience the ultimate digital lifestyle at the comforts of their home,” PLDT Home Vice President and Marketing Director Gary Dujali said in a statement.

Access to all the content from these partners come free with any PLDT Home Fibr subscription, Dujali said.

PLDT added that its 1 Gbps fixed broadband service has no data cap.

Also on Thursday, October 22, its rival Globe Telecom, Incorporated announced its new Platinum Broadband Plans with Internet speeds of up to: