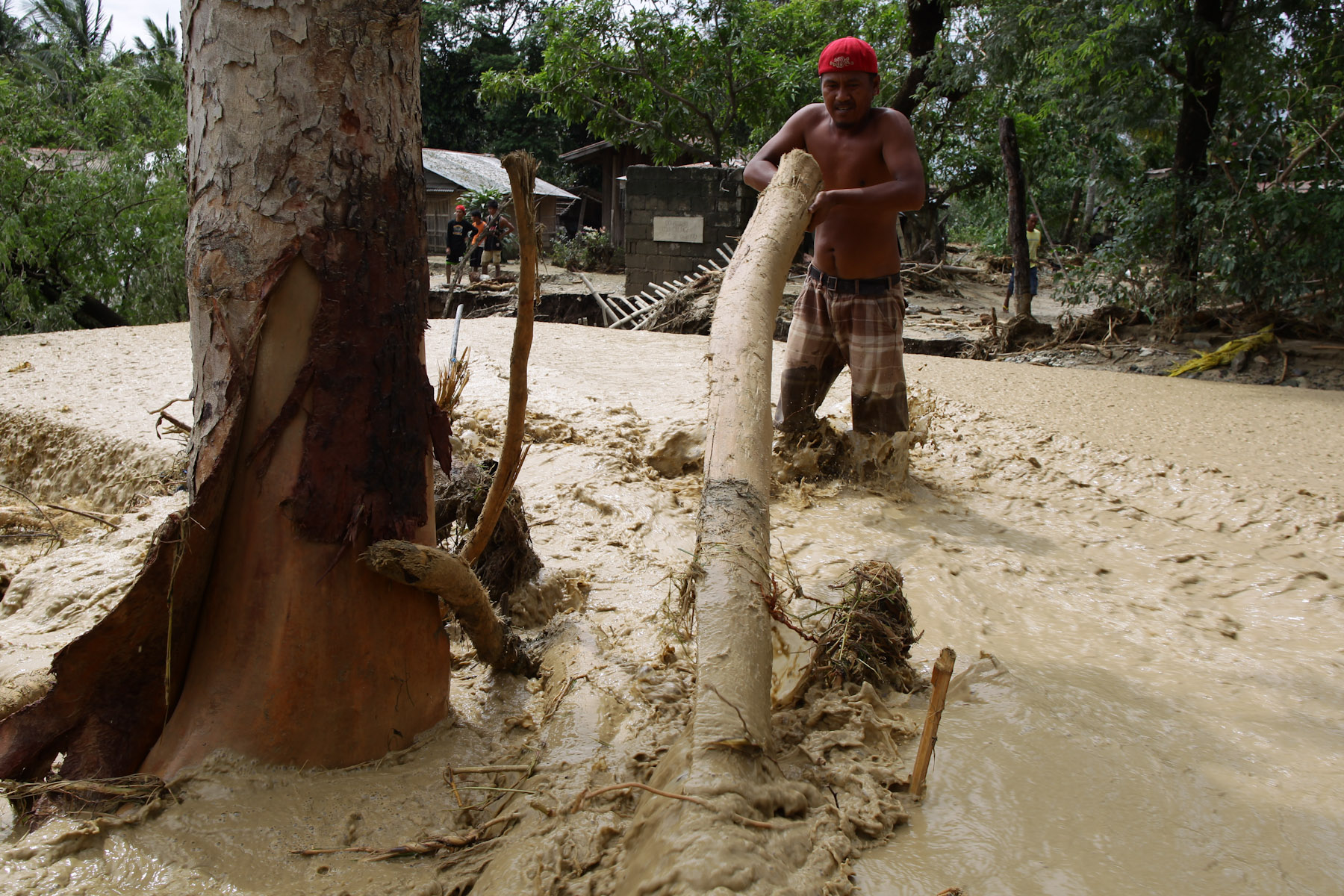 SANTA ROSA, Philippines – Philippine rice farmer Francisco Santo Domingo’s life is in ruins after losing yet another gamble with nature, but the typhoon that destroyed his crops means gleeful loan sharks have again hit the jackpot.

Like thousands of other farmers, Santo Domingo will be forced to go back to the “shadow” bankers who dominate the nation’s agricultural economy and take on even more debt at exorbitant interest rates.

“My life is an endless cycle of borrowing money to plug more money that I owe,” a disconsolate Santo Domingo, 37, told Agence France-Presse as he looked over crops that were just a week away from harvest but ruined by Typhoon Lando (Koppu).

“This storm will mean we will go hungry for a very long time. We bet everything on this harvest.”

Lando brought floods as high as three meters (10 feet) to one of the Philippines’ most important rice growing regions, fertile central plains on the main island of Luzon.

He took out a 60,000-peso ($1,300) loan – a massive amount for any small-time farmer in the Philippines – just a few months ago to buy rice seeds, fertilizers and equipment.

With zero savings or collateral to offer banks for a loan, Santo Domingo said he had no choice but to seek out a village loan shark and agree to terms of 25% interest per month.

If the typhoon had not come, the father-of-three had planned to sell his rice quickly enough to pay off most of the loan, while earnings from other crops would have helped manage the rest of the debt.

Now, he faces going back to a loan shark to try and finance another rice crop.

“The loan sharks only have to deal with delayed payments, they will get their money. But us farmers are condemned to die in debt,” the 37-year-old said.

This cycle of debt and disaster haunts millions of farmers and their families across the Philippines, where an average of 20 major storms smash the country each year.

According to the central bank, 604 of the country’s 1,600 cities and towns do not have a bank, denying many residents access to formal credit.

It is in these remote and rural environments that backyard credit operations thrive, with scandalous interest rates sometimes reaching up to 20% a day, analysts said.

In Santa Rosa, one loan shark admitted to Agence France-Presse there were 7 of them operating in a single government building.

“We expect the farmers to come to us for more loans after this typhoon. We are just helping them,” the lender, a 43-year-old accounting clerk, told Agence France-Presse.

The woman, a mother of two, spoke to Agence France-Presse on the condition her name was not published, explaining she had not declared taxes on her loan earnings.

She said she got into the lending game a year ago with just a few thousand pesos and, charging monthly interest of 10%, she was quickly amassing a fortune.

The woman said she already had more than one million pesos lent out to customers, meaning revenues of 100,000 pesos a month.

“I am earning countless times more than my government paycheck. I hope to expand,” said the loan shark.

Because she works at the government office, she can get authorisation from the farmers to take money from their relatives’ paychecks, reducing the risk for default.

Some loan sharks also ask for the ATM cards of the farmers or their relatives, which they will keep until the loan is paid, she said.

Many of the farmers who bite the bullet with loan sharks will never recover from debt, according to financial planner Salve Duplito, a celebrity personal finance coach.

“The more they get into these schemes, the harder it will be for them to lift themselves out of this debt quicksand,” she told Agence France-Presse.

Poor farmers, many of them illiterate, fail to realise how the scandalous interest rates add up, sometimes up to 1,000 times the principal amount, she said.

And while Agence France-Presse interviewed a lender with no plans to use force to recoup debts, Duplito said violence and intimidation were common tools in the industry.

“They would shame the farmers by cursing at them in front of their houses. Some would take farm animals, pots and pans in place of cash,” she said.