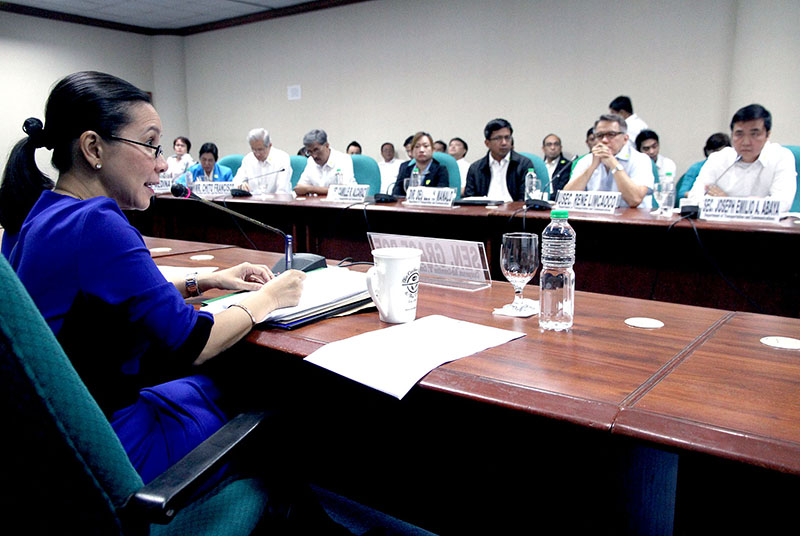 MANILA, Philippines – Improvements in Metro Rail Transit Line 3 (MRT3) services will be felt by the first quarter of 2016, or by March at the latest, Department of Transportation and Communications (DOTC) Secretary Joseph Emilio Abaya said.

“There will be improvement in service come first quarter,” Abaya said during the resumption of the Senate hearing on MRT3 woes on Monday, November 9.

Abaya told the Senate committee on public services chaired by Senator Grace Poe that the improvements would be evident when the new trains become operational by early 2016.

DOTC approved in June this year the delivery of 48 new train cars starting the first quarter of 2016. (READ: DOTC to get new MRT3 trains starting January 2016)

Maintenance and improvement projects are ongoing for the problem-ridden MRT3, some of which were cited by Abaya during the Senate hearing.

These include the department’s acquisition of a rail grinding machine for the troubled MRT3. The installation of 7,000 linear meters’ worth of new rails are also set within the year, and as replacements to MRT3’s worn-out tracks.

The new tap-and-go ticketing system has also been activated at all MRT3 stations starting this week. It is aimed to provide a seamless transfer across Light Rail Transit lines 1 and 2 and MRT 3. (READ: beep™ cards now fully operational on MRT3, LRT1, LRT2)

Other ongoing maintenance and improvement projects for MRT3 include the refurbishment of 12 Schindler-brand escalators, which is expected to be completed before the year ends. The rehabilitation of MRT3 toilets is also being implemented, DOTC said, with 6 facilities already open for public use.

Poe, however, questioned the delays and lack of progress in the rehabilitation of MRT3.

She said that deliverables under the 2015 budget should have been implemented by now, including the improvement of MRT’s facilities such as elevators and escalators, which should have been completed by the third quarter of 2015.

“The funds are available. What’s taking them so long? While they dilly-dally on deliverables, the commuters continue to suffer,” Poe said.

Poe said there was a P50-million* ($2.36-million) allocation for MRT3 escalators and elevators in the 2015 budget and another P50 million ($2.36 million) in the supplemental budget.

But Abaya said the repair of Schindler escalators is eyed to be finished by December. The remaining 22 to 23 Mitsubishi elevators and escalators need to be changed, though, as these are using a 15-year-old technology.

Also needed are different parts and pieces, the procurement of which is under the Department of Budget and Management.

All stations have Schindler escalators except those in Cubao in Quezon City and Taft Avenue in Pasay City, MRT general manager Roman Buenafe said.

There was failure in the first round of bidding for the elevators procurement, but Buenafe said they are expecting another round of submission and that the procurement will be completed in 120 days.

Poe also questioned the separate procurement of train coaches and engines. The coaches will be coming from China while engines will be shipped from Germany.

“How can we test them? I already inspected the prototype trains delivered from Dalian but we can’t test them without an engine. Will they be able to run on our tracks? We don’t know. We were not informed that engines for new trains involved a separate contract,” Poe said. (READ: MRT3 prototype train car not ready for testing until December)

Abaya said DOTC has yet to accept the trains. Dynamic testing of the MRT3 prototype train car was scheduled from November to December, when these parts will be delivered from Germany, he also said in September.

Poe also questioned the contracts entered by the government, availing of the services of companies that do not even have the capability to maintain Metro Manila’s elevated mass transit railway systems.

“The maintenance providers cannot even fix toilets,” she noted. Buenafe said the construction of the rest rooms for females and persons with disability will be completed by the end of 2015.

Abaya said that procurement remains an issue for DOTC as it is too stringent, which he said is being praised by the international organizations.

Still, it also slowed down the process. “That (procurement) is a continuing issue,” Abaya said.

But Poe said the problems of MRT3 (with a ridership of 650,000 daily) all boils down to the DOTC’s failure to deliver improved services on time, and that Abaya should be really on top of things, she said in Filipino during an ambush interview Monday.

(If he really wants to get things done, as DOTC chief, he should know when are the delivery dates. There were also instances when they [DOTC officials] were asking each other [before they respond to the committee’s questions]. And it appeared that he didn’t know the other circumstances why there are delays).

In her opinion, Poe said “we deserve a better DOTC Secretary,” and added while Abaya is very intelligent, the country needs not only an official who has the capability, but is actually ensuring that things are done on time.

Poe said a major consideration is who will replace Abaya if he heeds the call for his resignation.

(Who’s going to replace him now? Perhaps someone who really knows, who already has the experience in DOTC. Of course, someone who’s responsible. But this is not the end yet. We’ll still have another hearing.)

Thus Poe reminded the transportation officials of two deliverables: new trains with engines and engines for the existing trains.

“Imagine the thousands of commuters who have to bear the brunt of delays and inefficiencies. While we count the days until the trains arrive and until facilities are improved, commuters continue to suffer,” Poe said. – Rappler.com