MANILA, Philippines – Smartphone subscription penetration is expected to reach around 70% for the Philippines in 2018, the latest edition of the Ericsson South East Asia and Oceania Mobility Report showed.

This makes the 700 megahertz (MHz) frequency band crucial to provide better Internet services in underserved, rural areas, said Sean Gowran, head of Ericsson Philippines and Pacific Islands, on the sidelines of a briefing in Makati City on Thursday, December 10.

“700 MHz is the lowest band available for cellular communications in the Philippines. The lower the band, the greater coverage you’ll get… which means you’ll have a lower capital investment to cover an area. We have pretty good service for the urban areas. To really provide universal coverage, you’ll need the 700 MHz,” Gowran said. Ericsson’s report shows that LTE subscriptions will grow to around 40% of total mobile subscriptions in the Philippines by 2018; while more than 75% of people in the Southeast Asia and Oceania region will have access to LTE networks by 2021. 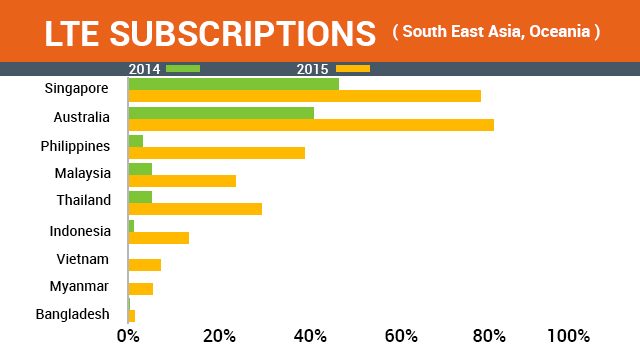 “This heightens the need for the 700 MHz, because this is critical for the telco operators in order to roll out affordable services and introduce higher data space,” Gowran said.

“This year, smartphone subscription penetration for the country is estimated at around 40% and we see this growing to around 70% by 2018,” he added.

The report also shows that with this high subscription penetration, rural areas will become more important in the coming years.

“And to realize the full potential for local market, service providers and device manufactures will need to address existing challenges around availability, affordability, and on increasing consumers’ levels of awareness on the benefits of smartphones and mobile data,” Gowran said.

With the continued rise of smartphones and an accelerated growth in data usage, the total mobile data traffic in the region is seen to increase 14-fold by 2021.

In the Philippines, almost 60% of consumers are subscribing to 2.1-5GB mobile broadband plans, compared to around 40% in 2014. 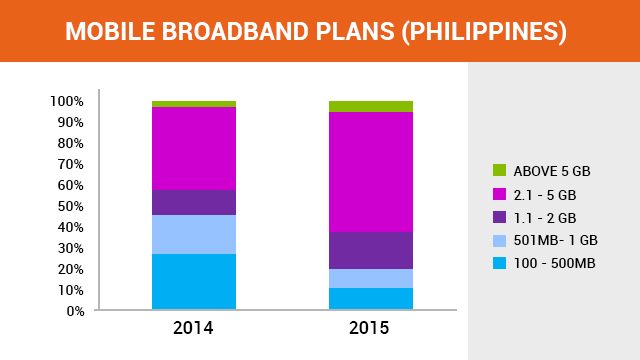 The Ericsson report also said that of the Philippine consumers who have a mobile broadband volume package, around 40% use less than 50% of their plan allocation; while 20% of consumers use more than 100% of their allocation.

The study shows that subscribers are consuming more data than ever before and they are subscribing to larger volume packages, according to Gowran.

“We expect that consumers who underutilize their subscription packages will have a lower perception on the value for money of the package from the service provider,” he said.

“The challenge is that this may lead to churn. This signals an opportunity for operators to reduce churn proactively, recommending the best packages that match their subscribers’ usage pattern,” he added.

The report also said that the countries in the region with the best network performance are Australia and Singapore, due to their leadership in deploying LTE and LTE Advanced.

Ericsson analysis shows that data-intensive applications, such as HD video streaming, could easily be delivered by mobile networks in Singapore and Australia across the whole coverage area.

“With the next wave of new smartphone users expected to come from rural and remote areas, the challenge will be how to deliver a similar mobile broadband experience to these populations in a cost-effective way,” Gowran said.