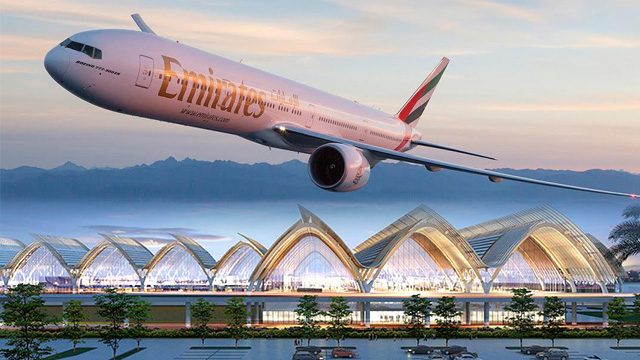 Facebook Twitter Copy URL
Copied
By March, Emirates will connect travelers in and near Cebu and Clark Freeport in Pampanga to the Middle East, Africa, Europe, and the Americas via Dubai

Mactan Airport is the second busiest airport in the Philippines, with the capacity to handle 4.5 million passengers a year.

Once the new terminal being built by operator GMR Megawide Cebu Airport Corporation is operational by June 2018, its passenger capacity will surge to 12.5 million.

GMR Megawide identified 3 key markets that should be connected to Cebu to increase inward tourism, outbound travel for Filipinos, and cargo capacity to support exports of Filipino products.

These 3 markets are the Middle East, the US, and Europe.

Following the announcement of a direct Cebu-Los Angeles service with PAL starting March this year, the “Dubai route becomes the second strategic vision to be realized by GMR Megawide for the benefit of Cebuanos,” the operator said in a statement on Wednesday, January 6.

Emirates said it will launch a daily Dubai-Cebu-Clark circular service on March 30.

This service marks Emirates’ return to Clark after the airline’s first entry in 2013.

Emirates said it will provide travelers in and near both Cebu and Clark with “convenient and fast” connections to destinations in the Middle East, Africa, Europe, and the Americas, via Dubai.

GMR Megawide Chairman Srinivas Bommidala said the pursuit of such new and diverse routes for Cebu was supported by detailed economic analysis to ensure long-term sustainability, and economic and social benefits for passengers and businesses.

“Emirates operates multiple daily frequencies into GMR’s airports in Delhi and Hyderabad (India) and the GMR Megawide team was able to leverage the knowledge gained in building those frequencies and networks and apply them while proposing a viable route analysis to Emirates for the Cebu route,” Bommidala said.

For GMR-Megawide President Louie Ferrer, these route announcements form the basis of his group’s strategic vision of connecting Cebu to key global destinations.

He also said these routes are just a couple of the many new routes to be launched.

“Filipinos living in Visayas and Mindanao who go to the Middle East and Europe will benefit from this new route. Now they can fly directly from Cebu and save the hard-earned money they would usually spend on board, lodging, and transportation if departing from Manila,” Ferrer added.

He said a large number of overseas Filipino workers, about 35% to 40%, live in the central and southern Philippines.

But most of them still have to make their way to Manila to catch flights going to their countries of work, incurring additional expenses and eating much time, Ferrer said.

“If we can give our kababayans (countrymen) the opportunity to spend even one extra day with their loved ones by allowing them to fly out directly from Cebu, then we’ve done our job,” the GMR-Megawide president added. – Rappler.com