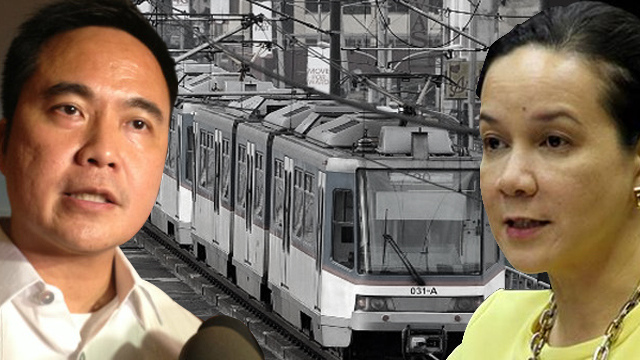 MANILA, Philippines – While presidential aspirant Senator Grace Poe was calling for a Senate hearing to address an “emergency situation” involving the Metro Rail Transit Line 3 (MRT3), a Korean-Filipino joint venture formally took over the maintenance of the train system.

Abaya was referring Poe’s statement hours earlier. The presidential aspirant said she would call for an emergency Senate hearing on the MRT3 following “reports” that Busan Transport Corporation had backed out of the MRT3 maintenance contract, fearing legal consequences.

Abaya and MRT3 General Manager Roman Buenafe said Poe could have been misinformed.

“If she believes news reports on Busan backing out and that there is currently no MRT3 maintenance provider, then her statements are based on the wrong facts,” Abaya told reporters.

“There wasn’t a single second that MRT had no maintenance provider. If that happened, we’d stop operations because it’s not safe,” Abaya added.

Buenafe said news reports that Busan had withdrawn from the joint venture has no basis.

“Hindi ko alam kung saan nanggaling ito. Kuryente ang nangyari. (I didn’t know where this came from. They were given a bum steer),” Buenafe said during the briefing.

In her statement, Poe said said she wants Abaya and others involved in the awarding of the maintenance contract to attend the hearing. (READ: Poe to Aquino: Fire transport chief Abaya now)

“We now have an emergency situation, so we need to call for another hearing, which we will schedule in the coming days,” Poe said on Friday.

In a separate statement, Poe said Filipino commuters have long endured the frequent breakdowns and poor service of the MRT. She had urged President Benigno Aquino III to sack Abaya but the Chief Executive categorically announced on Friday that the transportation chief will remain in his post.

(This is the problem, we in the legislative branch have our hands tied, we can’t put them behind bars. We can just recommend and call for a hearing. But the power to replace officials is with the President.)

This was after officials of the Department of Transportation and Communications (DOTC) and the Busan group signed the 3-year MRT3 maintenance deal on Thursday, January 7.

Busan has been operating and maintaining the Busan Metro, 4 railway lines of the mass transit system in Busan, South Korea since 1999, gaining recognition as one of the most reliable train experts worldwide.

The consortium bagged the contract in December last year, through an emergency bidding, after two consecutive failed public auctions of the maintenance deal.

Abaya said the slight delay was due to “a language barrier with Busan’s Korean officials” not because of “fear of lawsuits related to the nature of the contract awarding.”

“It’s in the process of communication that understanding took a while,” the DOTC chief added.

Abaya also denied allegations that the group won the contract “through closed-door negotiations.”

“But it was Busan’s group we find most qualified,” Abaya said.

The P3.81-billion ($80.71-million), 3-year maintenance contract also covers the general overhaul of the trains and the total replacement of the signaling system.

Previous attempts to bid out the train system’s long-term maintenance contract – once in September 2014 and another in January 2015 – resulted in failure due to the non-participation of bidders.

Recognizing the urgent need to address the railway’s maintenance requirements, DOTC said the Government Procurement Policy Board (GPPB) unanimously approved its decision to proceed with an alternative mode of procurement pursuant to the Republic Act No. 9184.

The Department of Justice and the National Economic Development Authority have also approved the said mode of procurement.

However, the Metro Rail Transit Corporation, the private corporation that owns the MRT3 system, claimed that the deal with the Busan consortium had no legal basis. MRTC also questioned its qualifications.

In his final State of the Nation Address (SONA) in July last year, President Benigno Aquino III said that the MRTC was liable for neglecting the upkeep of the train line.

The contract between the government and the MRTC – and a series of temporary restraining orders and arbitration – was one of the reasons behind the lack of upgrades for the train line, Aquino said then. – with a report from Katerina Francisco/Rappler.com