FAST FACTS: Mining in the Philippines 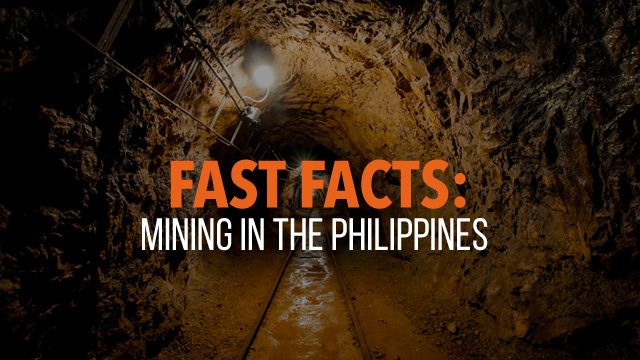 MANILA, Philippines (UPDATED) – The mining industry in the Philippines is controversial again after Environment Secretary Gina Lopez ordered the closure of about 23 mining operations and cancellation of a total of 75 mineral production sharing agreements (MPSAs) in watersheds earlier this year. (READ: DENR announces closure of 23 mining operations)

Below is a list of key things to know about the mining industry in the Philippines:

1.The Philippines is the fifth most mineral-rich country in the world for gold, nickel, copper, and chromite. It is home to the largest copper-gold deposit in the world. The Mines and Geosciences Bureau has estimated that the country has an estimated $840 billion worth of untapped mineral wealth, as of 2012.

2. All the regions (except NCR and ARMM) in the country allow mining operations. ARMM ceased issuing permits due to the on-going peace process between the Moro Islamic Liberation Front and the national government.

7. The contribution of minerals and mineral products to the country’s total exports is at 4% and 0.3% for non-metallic mineral manufacturers in 2016.

9. The Mining Act of 1995 allows for foreign ownership of mining assets and exploration permits. The Supreme Court upheld the constitutionality of the foreign investors’ participation in mining activities in 2004.

10. Mining tax is low at 2% for metallic and non-metallic minerals. During the Aquino administration, a mining reform bill was drafted to increase revenues of the government. In the bill, companies will either pay 10% tax on gross revenues or 45% to 55% tax on adjusted mining revenues plus a percentage of windfall profit, whichever is higher.

13. As of August 2016, mining companies have already committed P13.1 billion for the development of their host and neighboring communities under their Social Development and Management Programs, the MGB reported.

14. Meanwhile, mining companies have allotted a total of about P19.1 billion for the implementation of approved projects and programs under their Environmental Protection and Enhancement Programs.