Could this be GrabBike’s last ride in the Philippines? 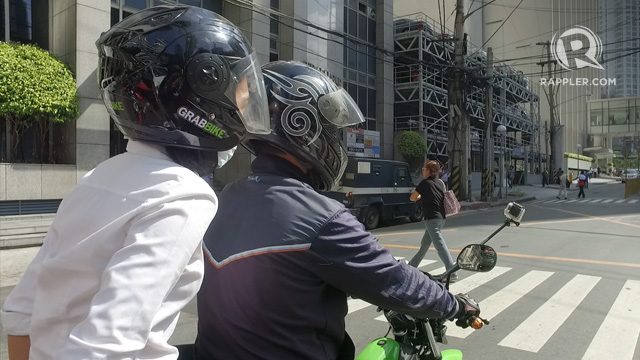 MANILA, Philippines — With Metro Manila’s horrendous traffic situation and insufficient public transportation, many Filipinos turn to motorbikes to get around.

But just two months after, GrabBike faced resistance from the government.

The Land Transportation Franchising and Regulatory Board (LTFRB) on Wednesday, January 27, ordered GrabBike to cease operations until the regulator has promulgated guidelines to authorize the service.

For hundreds of GrabBike drivers like Noel Barredo — a former liaison officer at a shipping company — this is bad news.

“Nagresign ako sa trabaho ko at napagdesisyunan na gawin itong full-time kasi mas maganda ang kita dito kaysa sa minimum [wage of P466 per day]. Pero ngayon, hindi ko na alam gagawin ko (I resigned from my previous job because I decided to make this full time as the pay is better than the minimum wage of P466 per day),” Noel, who has been working as a full-time GrabBike driver for two weeks, said in a phone interview.

“Siguro, hanap muna ng ibang pagkakitaan habang naghahanap ng bagong trabaho (Maybe, I’ll look for another source of income while finding a new job),” Noel replied when asked if he has other sources of income.

Noel added that an average GrabBike driver works around 12 hours a day, ferrying an average of 10 passengers. This equates to an average income of P800.

It’s not just the GrabBike drivers who are disappointed with LTFRB’s order, commuters who rely on the motorbike service are dismayed as well.

But why, LTFRB? Focus on abusive and rude taxi drivers complaints first https://t.co/uKdkjUpWzF

A quick way to get from A to B, not all the time and every occasion, down the drain. What a pity! https://t.co/4fArEXUpuh

LTFRB, DOTC: This is for passenger safety

But for the LTFRB, the cease order is just for the safety of commuters.

“As part our mission to ensure the riding public’s safety and convenience, we will not tolerate Transportation Network Companies (TNCs) to provide transport service using motorcycles or bikes until we have set the proper guidelines and regulations,” LTFRB Chairman Winston Ginez said in a statement.

Citing the 2015 World Health Organization road safety report, the LTFRB said more than half (53%) of those who die in road accidents in the Philippines are motorcycle riders.

The LTFRB also cited a leading builder of Japanese motorcycles and motorcycle parts, which says motorcycle accidents ranked 4th as the top causes of death in the Philippines.

“The motorcycle maker said that there are 3.4 million motorcycle users in the Philippines and most of them are beginners. Because motorcycle is the most economical and easiest means of transportation to beat traffic congestion in the city, they are also involved in alarming statistics on motorcycle accidents in the country,” the Philippine land transport regulator said.

According to Transportation Assistant Secretary for Planning Sherielysse Reyes-Bonifacio, the GrabBike service, locally known as habal-habal, is not covered by any transportation category promulgated by the government.

“It’s a bit of a gray area. Motorbikes used as public transport aren’t covered by the new department order on transport network vehicle services (TNVS) like Uber. Only four-wheeled vehicles are covered by TNVS,” Bonifacio told Rappler in an interview last week.

“Commuters should understand. How can we protect them if this public transport service isn’t regulated?” she added.

LTFRB’s Ginez warned that GrabTaxi could face a cancellation of its accreditation if it continues to offer the motorcycle service.

Until the government decides whether it will set up new rules for motorbike services, four-wheeled vehicles will remain the king of the streets in Metro Manila. — Rappler.com